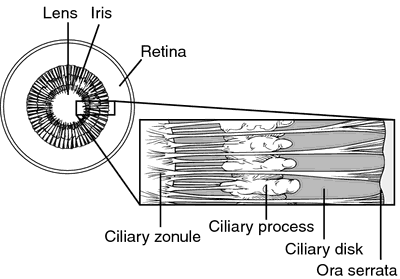 The delicate suspensory ligament of the CRYSTALLINE LENS of the eye.
Collins Dictionary of Medicine © Robert M. Youngson 2004, 2005

Feedback
Flashcards & Bookmarks ?
Please log in or register to use Flashcards and Bookmarks. You can also log in with
Flashcards ?
My bookmarks ?
+ Add current page to bookmarks
Mentioned in ?
References in periodicals archive ?
Ohtaka-Maruyama et al., "Intracapsular organization of ciliary zonules in monkey eyes," Anatomical Record, vol.
Lens extrusion from laminin alpha 1 mutant zebrafish
[15] reported one case with a 1.0 mm posterior capsule irregularity using 35 MHz UBM and emphasized that 35 MHz UBM was equipped with 70 [micro]m of axial-lateral resolution and penetration with a 7.0 to 8.0 mm probe and could provide more detailed evaluation of the zonule and ciliary body because of its deeper penetration than 50 MHz UBM as well as higher resolution than 20 MHz B scans.
Role of 25 MHz Ultrasound Biomicroscopy in the Detection of Subluxated Lenses
This redistributes tension from the weakened zonules equally over the others.
Intraoperative complications
Therefore, we adopt the direct phacochop technique to deal with the nucleus, which means that the nucleus is held firmly by the phaco tip, meanwhile the chopper tip hooks the equator of the nucleus and moves centripetally inward from the periphery to segment the nucleus.16 In this way, chopping applies much less force against the zonules and capsule because the phaco tip secures the nucleus, and the manual instrument forces are directed centripetally against each other.
Phacoemulsification in the anterior chamber: An alternative surgical technique in post-vitrectomy cataract
Apart from their physical proximity, another possible connection is the arrival of growing ciliary processes at the equator and formation of lens zonules in the fourth month.
Sectoral Ciliary Body Agenesis Complicated with Cataract Formation Diagnosed by Ultrasound Biomicroscopy
Identifying PXS is also significant for patients who require cataract surgery as the lens zonules are weakened by this condition, increasing the risk of the lens dislocating into the vitreous during surgery, and also of a subluxated IOL after surgery (see Figure 4).
Pigment dispersion, pseudoexfoliation syndromes and glaucoma
PXF has also been known to cause a weakening of lens zonules leading to lens drop and other complications during cataract surgery.
A NON-RANDOMISED, COMPARATIVE CROSS-SECTIONAL STUDY TO ANALYSE THE SIGNIFICANCE OF 'PRESSURE-TO-CORNEA INDEX' IN PSEUDOEXFOLIATION EYES WITH AND WITHOUT CLINICAL GLAUCOMA
With ciliochoroidal effusion and anterior rotation of the ciliary body, the iris-lens diaphragm moves forward, the zonules relax, and the lens thickens, which results in myopic shift and narrowing or closure of the anterior chamber angle [1,4].
Bilateral Angle Narrowing and Acute Myopia Induced by Indapamide: A Case Report
Pigment dispersion syndrome (PDS) results from posterior bowing of the iris and rubbing between the lens zonules and epithelial layer of the iris, and usually affects myopic eyes in men during the third to fourth decade of life.[sup][1],[2],[3],[4],[5],[6],[7],[8],[9],[10],[11] The literature indicated that Caucasians have the highest prevalence of PDS among all races,[sup][12] with clinical characteristics including Krukenberg spindle, homogeneous trabecular meshwork (TM) pigmentation, and spoke-like mid-peripheral iris transillumination defects (ITDs), which are referred as a triad of PDS.
Long-term Efficacy of Trabeculectomy on Chinese Patients with Pigmentary Glaucoma: A Prospective Case Series Observational Study
Part 5, on primary IOL implantation with compromised capsules, contains three subsections on recommendations for broken capsule with intact zonules, compromised zonules and/or lack of capsular support, and managing iris abnormalities combined with IOL fixation.
Intraocular Lens Surgery: Selection, Complications, and Complex Cases (online access included)
According to the pamphlet, "The abnormal protein seen in this condition settles and weakens the lens zonules, which are suspensory fibers that hold the lens in place.
How to improve your odds of successful cataract surgery
"The ciliary body has three functions: accommodation, aqueous humor production and maintenance of the lens zonules. Our studies have shown astaxanthin to improve focus rates in patients suffering with CVS [Computer Vision Syndrome] symptoms." In other studies, she said astaxanthin was shown to improve ROS [Reactive oxygen species] scavenging activity in the aqueous humor, thus supporting the delivery of oxygen to the lens.
Envisioning the future of eye health: carotenoids, omega-3s and botanicals provide support as consumers look to preserve their vision