[tor″tĭ-kol´is]
a contracted state of the cervical muscles, producing torsion of the neck; the deformity may be congenital, hysterical, or secondary to conditions such as pressure on the accessory nerve, inflammation of glands in the neck, or muscle spasm. Called also wryneck. 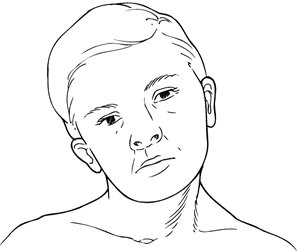 Torticollis. From Dorland's, 2000.
Miller-Keane Encyclopedia and Dictionary of Medicine, Nursing, and Allied Health, Seventh Edition. © 2003 by Saunders, an imprint of Elsevier, Inc. All rights reserved.

(tōr'ti-kol'is), [MIM*189600]
A contraction, or shortening, of the muscles of the neck, chiefly those supplied by the accessory nerve (NXI); the head is drawn to one side and usually rotated so that the chin points to the other side.
See also: dystonia.
Synonym(s): wry neck, wryneck
[L. tortus, twisted, + collum, neck]
Farlex Partner Medical Dictionary © Farlex 2012

(rī′nĕk′)
n.
a. See torticollis.
b. A person with torticollis.
The American Heritage® Medical Dictionary Copyright © 2007, 2004 by Houghton Mifflin Company. Published by Houghton Mifflin Company. All rights reserved.
A focal dystonia consisting of one-sided contracture with palpable induration of the sternocleidomastoid muscle, causing the chin to turn towards the opposite side and the head to rotate towards the lesion; wryneck is accompanied by facial muscle dysplasia
Aetiology Congenital form—unclear—possibly due to in utero or peripartum trauma to venous drainage, causing asymmetric development of the face and skull; the later it is recognised, the more likely it will require surgery
Segen's Medical Dictionary. © 2012 Farlex, Inc. All rights reserved.

Congenital torticollis, torticollis A focal dystonia consisting of one-sided contracture awith palpable induration of the sternocleidomastoid muscle, causing the chin to turn towards the opposite side and the head to rotate towards the lesion; WN is accompanied by facial muscle dysplasia Etiology Congenital form– unclear–possibly due to in utero or peripartum trauma to venous drainage, causing asymmetric development of the face and skull; the later WN is recognized, the more likely surgical intervention is required
McGraw-Hill Concise Dictionary of Modern Medicine. © 2002 by The McGraw-Hill Companies, Inc.

Feedback
Flashcards & Bookmarks ?
Please log in or register to use Flashcards and Bookmarks. You can also log in with
Flashcards ?
My bookmarks ?
+ Add current page to bookmarks
Mentioned in ?
References in periodicals archive ?
"Wrynecks are very rare and this was the first record for Lock's Common.
Woodpecker a rare find for ecologist
A prime characteristic of the wryneck, Jynx torquilla, is an ability to turn its head almost 180 degrees.
Two Scottish etymologies for English words
Far Left, book about his time in Warburg and, left, a wryneck
THE BIRD MAN OF WARBURG; Shortly after this picture was taken, George Waterston would be taken a prisoner of war. Behind the wire, he swapped his revolver for binoculars and would become one of the world's most influential ornithologists. He was...REVEALED HOW HERO'SS TWITCHERS HELPED BRITS ESCAPE FROM GERMAN CAMP
Older fruit trees have nestholes for tits, tree sparrows and the rare wryneck, which has ceased to breed in England.
Orchards are no longer a natural habitat for birds
Three Snow Geese, of unknown origin, were on Anglesey's Alaw estuary and a Little Gull flew past Bardsey, where a Wryneck and Buffbreasted Sandpiper were seen last week.
BIRD NOTES With Julian Hughes
Other species of international conservation concern found in the traps were Great Reed Warbler, Nightjar, Golden Oriole, Wryneck, several species of shrikes, flycatchers and the local subspecies of the Scops Owl for which Cyprus has a special responsibility.
The 'big business' of bird trapping in Cyprus
HMS Wryneck was hit shortly after the bedraggled soldier was dragged on board.
WWII hero who survived two sinking ships in a day loses fight against cancer
The long-staying long-tailed duck is still on Llyn Trawsfynydd, while a wryneck was briefly at Rhoscolyn.
bird NOTES
* A rare sighting of a wryneck, from the woodpecker family, was made by David Hall, of Matfen in Northumberland.
Ken's garden a feast for birds
Up to 10 Spotted Redshanks and a Great White Egret are at Connah's Quay nature reserve, an Ortolan Bunting and Wryneck were found on Bardsey last Friday.
BIRD NOTES With Julian Hughes
"I could see the Wryneck steaming away in the distance on fire and sinking and HMS Diamond bobbing like a cork in the distance then sinking below moment memory The m picked called H to Crete.
Ships I was on we onthe same day an reBOTH hit nd I survived
Sooty and Balearic shearwaters, long-tailed skuas and more black terns were blown close to Bardsey, where a wryneck remained all week and a Western Bonelli's warbler dropped in on Thursday.
TAKING a breather after [...]