The thin, layered, outer ‘skin’ of the cornea. Advances in cell culture techniques have made it possible to grow complete sheets of viable corneal epithelium from a tiny sample taken from the edge of the patient's cornea. This is an important advance in the management of conditions featuring corneal epithelial disorders.
Collins Dictionary of Medicine © Robert M. Youngson 2004, 2005

The outermost layer of the cornea consisting of stratified epithelium mounted on a basement membrane. It is made up of various types of cells; next to the basement membrane are the basal cells (columnar in shape), then two or three rows of wing cells and near the surface are two or three layers of thin surface squamous cells (or superficial cells). The outer surfaces of the squamous cells have projections (called microvilli and microplicae), which extend into the mucin layer of the precorneal tear film and are presumed to help retain the tear film. The epithelium in humans has a thickness of about 51 μm. Some dendritic cells of mesodermal origin are also normally present. Epithelial stem cells are located at the limbus; they give rise to the basal cells. The corneal epithelium receives its innervation from the conjunctival and the stromal nerves. The life cycle of epithelial cells is about a week (Fig. C20). See Langerhans' cell; epikeratoplasty; mitosis; pachometer; palisades of Vogt. 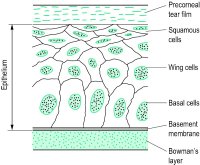 Feedback
Flashcards & Bookmarks ?
Please log in or register to use Flashcards and Bookmarks. You can also log in with
Flashcards ?
My bookmarks ?
+ Add current page to bookmarks
Mentioned in ?
References in periodicals archive ?
Because its wing cells store energy from the sun, the "Solar Impulse 2" can fly at night, as well as during the day.
Muscat International Airport to Receive Solar Impulse 2 Tomorrow
The corneal epithelium, obtained from TUE and observed in semithin sections at light microscopy, showed superficial cells with variable shape and optical density, round wing cells with not clearly evident intercellular borders, and basal cells with hyper-chromic nuclei and wide intercellular spaces (Figure 2(a)).
In the corneal epithelium obtained from TTE, observed in semithin sections at light microscopy, superficial cells appeared flat with well-evident intercellular borders; wing cells were polygonal with well-evident intercellular borders; and basal cells had polygonal shape and evident intercellular spaces (Figure 2(c)).
Protective effects of trehalose on the corneal epithelial cells
40 Wing cells [m.sub.3] and cup closed and stalked; [male] hypandrium reduced and largely fused with gonocoxites Trichoura Londt, 1994 (6 spp., Londt 1994)
A remarkable new genus of robber flies, Akatiomyia gen. n., from the Western Cape Province of South Africa, and a new key to the genera of Afrotropical Stenopogoninae (Diptera: Asilidae)
PZL Swidnik, AgustaWestland, Pilatus PZL Swidnik, the Polish airframer recently acquired by AgustaWestland, has signed a 10-year deal to assemble fuselage and wing cells for Pilatus PC-12 turboprops, using parts made by Pilatus in Switzerland.
Aerospace & Defense News - Technology Europe
Caterpillars already carry disks of future wing cells, including those that will lay down the colorful design.
How the butterfly gets its spots: and what they tell us about fate
Wing cells: fore wing: 2A--second anal, 1R1--first radial 1, 1Rs--first radial sector, 2Rs--second radial sector; hind wing: 1A--first anal, M--medial, Rs--radial sector.
Revision of Durbadnus Pasteels, 1954, with notes on other Afrotropical Blennocampinae and Allantinae (Hymenoptera: Symphyta: Tenthredinidae)
We use a classification of wing wear similar to that used by others (e.g., Watt et al 1977; Tabashnik 1981), with five classes: class 1, little or no scale loss, scale loss less than the diameter of one wing cell, wing undamaged, although fringe hairs may be damaged; class 2, loss of some scales or 1-2 small nicks smaller than the diameter of one wing cell, or both) on wing margin; class 3, 1-2 large nicks (the size of the diameter of one wing cell) or >2 small nicks, or both; class 4, parts of the wings missing, up to 25% of total wing margin or over two wing cells; class 5, more than 25% of wing margin missing.
Fitness consequences of seasonal polyphenism in western white butterflies
During the insect's pupa stage, individual wing cells metamorphose into "ornate hollow shells containing struts, pillars, pigment granules and/or more elaborate constructions," says Helen Ghiradella, a specialist in butterfly scale morphology at the State University of New York at Albany.
Insect inscriptions: hunting for human symbols in gently fluttering wings
A "prototype" for the species-rich genus Bicyclus exhibits eyespots centered within each of the marginal wing cells (Schwanwitsch 1924; Condamin 1973).
The evolutionary genetics and developmental basis of wing pattern variation in the butterfly Bicyclus anynana
Non-parametric statistical tests have shown that in several species of butterflies the sizes of the homologous pattern elements in adjoining wing cells vary independently or are only weakly correlated (Nijhout, 1985a; Nijhout and Wray, 1988).
Phenotypic correlation structure among elements of the color pattern in Precis coenia (Lepidoptera: Nymphalidae)
This evolved increase in wing size was entirely due to an increase in wing cell area.
Bergmann size clines: a simple explanation for their occurrence in ectotherms