Vitiligo is a condition in which a loss of cells that give color to the skin (melanocytes) results in smooth, white patches in the midst of normally pigmented skin.

Vitiligo is a common, often inherited disorder characterized by areas of well-defined, milky white skin. People with vitiligo may have eye abnormalities and also have a higher incidence of thyroid disease, diabetes mellitus, and pernicious anemia. Vitiligo affects about 1-2% of the world's population. It is more easily observed in sun-exposed areas of the body and in darker skin types, but it affects any area of the body and all races. Vitiligo seems to affect men and women equally, although women more frequently seek treatment for the disorder.
Vitiligo may appear as one or two well-defined white patches or it may appear over large portions of the body. Typical sites for generalized vitiligo are areas surrounding body openings, bony areas, fingers, and toes. It can begin at any age but about 50% of the time it starts before the age of 20.

Vitiligo is a disorder with complex causes. People with vitiligo seem to inherit a genetic predisposition for the disorder, and the appearance of disorder can be brought on by a variety of precipitating causes. Many people report that their vitiligo first appeared following a traumatic or stressful event, such as an accident, job loss, death of a family member, severe sunburn, or serious illness. There are at least three theories about the underlying mechanism of vitiligo. One theory says nerve endings in the skin release a chemical that is toxic to the melanocytes. A second theory states that the melanocytes simply self-destruct. The third explanation is that vitiligo is a type of autoimmune disease in which the immune system targets the body's own cells and tissues.
The primary symptom of vitiligo is the loss of skin color. Hair growing from the affected skin areas also lacks color. In addition, people with vitiligo may have pigment abnormalities of the retina or iris of the eyes. A minority of patients also may have inflammation of the retina or iris, but vision is not usually impaired.

Autoimmune disease — A condition in which something triggers the immune system to react against and attack the body's own tissues.
Autologous transplantation — A procedure wherein the person donates blood or tissue to themselves.
Iris — The colored part of the eye.
Pernicious anemia — A disease in which red blood cells are abnormally formed due to the body's inability to absorb vitamin B12.
Retina — The innermost layer of the eye, it contains the rods and cones, specialized light-sensitive cells.

Vitiligo cannot be cured, but it can be managed. Cosmetics can be used to improve the appearance of the white areas not covered by clothing. Sunscreens prevent burning of the affected areas and also prevent the normal skin around the patches from becoming darker. Skin creams and oral medications are available for severe cases, but they have side effects that may make them undesirable. Autologous transplantation of skin is an option for those who are severely affected. Bleaching or depigmentation of the normal skin is another option.
In addition to treating the skin, attention should be paid to the psychological well-being of the individual. Extreme cases of vitiligo can be unattractive and may affect a person's outlook and social interactions.

The condition is usually gradually progressive. Sometimes the patches grow rapidly over a short period, and then the condition remains stable for many years.

No measures are currently known to prevent vitiligo.

[vit″ĭ-li´go]
a condition in which destruction of melanocytes in small or large circumscribed areas results in patches of depigmentation often having a hyperpigmented border, and often enlarging slowly. adj., adj vitilig´inous.
Miller-Keane Encyclopedia and Dictionary of Medicine, Nursing, and Allied Health, Seventh Edition. © 2003 by Saunders, an imprint of Elsevier, Inc. All rights reserved.

Dermatology An acquired condition characterized by patchy depigmentation in the face, elbows, knees, hands, feet, and genitalia, often at sites of trauma and pressure, which may appear at any age; there is an ↑ incidence in some families; autoimmunity may be a factor, as there is selective loss of melanocytes in the involved area. See Melanocyte.
McGraw-Hill Concise Dictionary of Modern Medicine. © 2002 by The McGraw-Hill Companies, Inc. 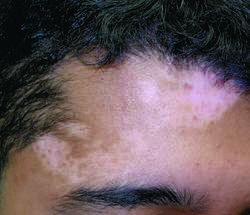 VITILIGO
A skin disorder characterized by the localized loss of melanocytes, with patchy loss of skin pigment. The depigmented areas, which appear most commonly on the hands, face, and genital region, are flat and pale and surrounded by normal pigmentation. Vitiligo affects all ages and races but is most noticeable in people with dark skin. The cause is unknown, but may be an autoimmune process since autoantibodies to melanocytes have been identified and vitiligo often occurs with autoimmune diseases. Synonym: leukoderma; skin, piebald See: illustration

Oral and topical synthetic trioxsalen and a natural psoralen, methoxsalen, are used with exposure to long-wave ultraviolet light, but the efficacy is doubtful. The lesions may be masked by use of cosmetic preparations. Vitiliginous areas should be protected from sunburn by applying a 5% aminobenzoic acid solution or gel to the affected areas. The use of 5% fluorouracil cream applied under an occlusive dressing to the depigmented areas may cause erosion of the dermis and, after re-epithelialization, pigment may reappear. Vitiligo of the scalp with depigmentation of the hairs of the affected area.
illustration

A skin disorder that features white patches, of variable size and shape, especially on the face, the backs of the hands, the armpits and around the anus. Vitiligo is inconspicuous in white people in winter but very obvious in black people or tanned whites. The affected areas of skin are deficient in pigment cells called melanocytes, but the cause of this is unclear. An immunological process is thought to be involved. Repigmentation can be achieved by taking a melanin precursor, L-phenylalanine, and then exposing the skin to ULTRAVIOLET LIGHT.
Collins Dictionary of Medicine © Robert M. Youngson 2004, 2005

A disease of the skin characterized by areas of depigmentation of various sizes and shapes. In the eye, it can be seen in the choroid or iris. It is often associated with syphilis or tuberculosis and forms part of the Vogt-Koyanagi-Harada syndrome. See poliosis.
Millodot: Dictionary of Optometry and Visual Science, 7th edition. © 2009 Butterworth-Heinemann

Q. Is there any treatment for Vitiligo? Can anyone tell the how Vitiligo treated completely

A. Vitiligo may be hereditary in some cases. Children of vitiligo affected parents are more likely to develop vitiligo disorder. However, most children will not get vitiligo even if a parent has it. Also most people with vitiligo do not have a family history of the disorder.

A. Normally treatment of vitiligo may take a long time. So patient should be relax and hopeful to treat this skin condition.
While start any treatment one thing is very important that not be depressed and anxious because this is the factor which can increase in vitiligo.
Take care when go out in afternoon.
Maintain a well balance diet plan which you can easily find by any dermatologist.
There are many treatment options are available for vitiligo as listed at http://www.antivitiligo.com/vitiligo-treatment/

More discussions about vitiligo
This content is provided by iMedix and is subject to iMedix Terms. The Questions and Answers are not endorsed or recommended and are made available by patients, not doctors.

Feedback
Flashcards & Bookmarks ?
Please log in or register to use Flashcards and Bookmarks. You can also log in with
Flashcards ?
My bookmarks ?
+ Add current page to bookmarks
Mentioned in ?
References in periodicals archive ?
However, availability of advanced technologies and alternative therapies for vitiligo treatment is expected to restrain growth of the vitiligo drugs market during the forecast period.
Vitiligo Drugs Market Analysis by Latest Trends, Growth in Manufacturing
At this point, the primary endpoint was assessed, with investigators comparing the proportion of patients treated with ruxolitinib who had at least 50% improvement in facial repigmentation from baseline on the Facial Vitiligo Area Scoring Index (F-VASI50) compared with those who received vehicle.
FACIAL VITILIGO: Topical ruxolitinib aided repigmentation, in phase 2 study
Vitiligo may also be triggered by physical or emotional stress, or skin damage, such as severe sunburn or cuts.
'Vitiligo stole my face - but I got it back with miracle liquid second skin'; Asha Saleh, 49, from Cardiff, is one of the first in the UK to try Microskin, an artificial skin that covers pigmentation, birthmarks, tattoos and scarring for up to a week
Table-II: Frequency of body region and dermatome involved by segmental vitiligo.
CLINICAL PROFILE OF SEGMENTAL VITILIGO IN A GROUP OF PAKISTANI PATIENTS
Patients with vitiligo had significantly higher positive familial history of vitiligo.
Zinc, Vitamin D, and TSH Levels in Patients with Vitiligo
Thirty-year-old Ms Barulaganye Golelamang of Matsitama provides a window into what it is really like to live with vitiligo so that people can have a little more insight into the everyday life of someone living with the condition.
Challenges of living with vitiligo
A study compared the therapeutic effects of clobetasol and topical tacrolimus on vitiligo, reported the equal efficacy of both medications, while more complications were mentioned in those treated with clobetasol.6 In another study, the therapeutic effects of mometasone with pimecrolimus were compared, both treatments led to nearly similarly decrease in size of vitiligo lesions.9
Efficacy of combination therapy of pimecrolimus 1% cream and mometasone cream with either agent alone in the treatment of childhood vitiligo
Although the pathogenesis of vitiligo is still unclear, genetic factors are now recognized as an important cause of vitiligo.
Rs3213758 in the RPGRIP1L Gene Associated with Susceptibility to Segmental Vitiligo in a Chinese Han Population
From this perspective, a mass of 13 cm accompanied by vitiligo lesions with a delay of 31 years in presentation is the largest epidermoid mass with peculiar characteristics reported in the literature.
The largest epidermal cyst with vitiligo lesions following female genital mutilation: a case report and literature review
Vitiligo is considered an acquired disorder of pigmentation.
CLINICAL PROFILE OF HYPOPIGMENTARY AND DEPIGMENTARY DISORDERS OF FACE IN PRE-TEEN CHILDREN ATTENDING TERTIARY CARE CENTRE OF NORTH-EAST INDIA
Indian Association of Dermatologists Venereologists & Leprologists (IADVL) recently marked the day to discuss the issues related to vitiligo, facts and myths, treatment options available and awareness programmes being conducted to curb the depression and help deal with the social stigma that the skin condition brings along.
Exposing the real issues of vitiligo
Vitiligo is a disease in which the pigment cells of the skin, melanocytes, are destroyed in certain areas, leading to white patches on different parts of the body.
'Yes I have vitiligo, but it doesn't make me less beautiful'