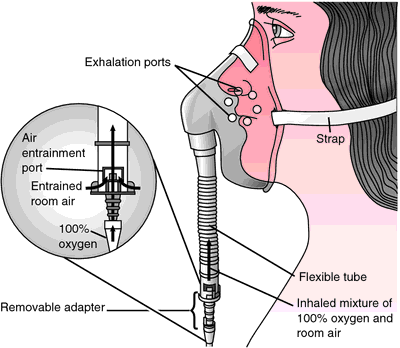 A Venturi mask for precise oxygen delivery. From Ignatavicius and Workman, 2000.
Miller-Keane Encyclopedia and Dictionary of Medicine, Nursing, and Allied Health, Seventh Edition. © 2003 by Saunders, an imprint of Elsevier, Inc. All rights reserved.

Feedback
Flashcards & Bookmarks ?
Please log in or register to use Flashcards and Bookmarks. You can also log in with
Flashcards ?
My bookmarks ?
+ Add current page to bookmarks
Mentioned in ?
References in periodicals archive ?
Complete pneumatic conveying systems for parts handling through venturi systems and negative transfer systems.
Materials conveying, loading and storage
(The Venturis were modest in comparison: They wanted only to reconcile architecture to context via signs, not to have architecture become a sign that overwhelms context.) (33) In other cases the decorated shed has become the duck: That is, the surface of the building is elaborated, with the aid of high-tech materials and electronic manipulations, beyond apparent support into excessive blobs and/or "mediated envelopes." (34) Decorated ducks come in a variety of plumage, yet even as the styles of appearance differ (a deconstructivist zigzag here, a techno-perfect lingam there), the logic of effect remains much the same.
Their studio visited Ruscha at the time, but in the end the Venturis might share less with Ruscha on Los Angeles than with Tom Wolfe on Las Vegas, especially his version of Pop language (see note 13) as practiced, for example, in his "Las Vegas (What?) Las Vegas (Can't hear you!
Koolhaas also has a Corbusian knack for catchy concepts (shared with Banham and the Venturis too), which, in good Pop fashion, he has sometimes copyrighted.
As elaborated by American artists a decade later, the Pop idea was again brought into architectural discussions, especially by Robert Venturi and Denise Scott Brown, where it served as a bridge to postmodern design (e.g., the historical pastiche of Michael Graves, Robert A.M.
(2) Twelve years later, in Learning from Las Vegas (1972), Venturi and Scott Brown advocated a Pop architecture that would return this imageability to the built environment from which it arose.
See Robert Venturi, Denise Scott Brown, and Steven Izenour, Learning from Las Vegas, rev.
Venturi was trained in the Beaux-Arts tradition at Princeton in the late 1940s and spent an influential year at the American Academy in Rome, while Scott Brown, though schooled at the Architectural Association in London in the early 1950s, departed early on for the States, where she eventually partnered with Venturi.
Image building
Venturi has continually sought to be his own historian, offering episodically new enhancements to the original explication de geste that accompanied publication of his iconic youthful masterpiece, alternately known as My Mother's House or the Vanna Venturi House, 1959-64.
Invitations to position Venturi in the larger frame of American art and thought since 1960 are, however, relatively few in "Out of the Ordinary," conceived by the same curatorial team that produced the Philadelphia Museum's elegant Louis Kahn exhibition a decade ago.
Throughout, the curators' privileging of Venturi's stunning power as a draftsman negates almost all opportunities to reveal the way designs evolve in the office, a real loss when we encounter moments of sea change in the firm's vocabulary and attitudes.
At the exhibition's climax, VSBA were given all the space behind a billboard rendering of the Vanna Venturi House facade, placed, perversely, at the end, rather than the beginning of the show's "main street." Allowing Venturi one more proprietorial reading, My Mother's House served as the portal to "The Architect's Dream," the couple's latest manifesto, which comes in the form of a multimedia installation.
LEARNING FROM PHILADELPHIA