A vasectomy is a surgical procedure performed on males in which the vas deferens (tubes that carry sperm from the testicles to the seminal vesicles) are cut, tied, cauterized (burned or seared) or otherwise interrupted. The semen no longer contains sperm after the tubes are cut, so conception cannot occur. The testicles continue to produce sperm, but they die and are absorbed by the body.

The purpose of this operation is to provide reliable contraception. Research indicates that the level of effectiveness is 99.6%. Vasectomy is the most reliable method of contraception.

Vasectomies are often performed in the doctor's office using a local anesthesia. The patient's scrotum area will be shaved and cleaned with an antiseptic solution to reduce the chance of infection. A small incision is made into the scrotum (the sac containing the testicles that produce the sperm). Each of the vas deferens (one from each testicle) is tied in two places with nonabsorbable (permanent) sutures and the tube is severed between the ties. The ends may be cauterized (burned or seared) to decrease the chance that they will leak or grow back together.
Sterility does not occur immediately after the procedure is finished. Men must use other methods of contraception until two consecutive semen analyses confirm that there are no sperm present in the semen. This will take four to six weeks or 15-20 ejaculations to clear all of the sperm from the tubes.
"No scalpel" vasectomies are gaining popularity. Instead of an incision, a small puncture is made into the scrotum. The vas deferens are cut and sealed in a manner similar to that described above. No stitches are necessary and the patient has less pain. Other advantages include less damage to the tissues, less bleeding, less risk of infection, and less discomfort after the procedure.
In some, cases vasectomies may be reversed. However, this procedure should be considered permanent as there is no guarantee of successful reversal.

No special physical preparation is required. The physician will first assess the patient's general health in order to identify any potential problems that could occur. The doctor will then explain possible risks and side effects. The patient is asked to sign a consent form which indicates that he understands the information he has received, and gives the doctor permission to perform the operation.

Following the surgery, ice packs are often applied to scrotum to decrease pain and swelling. A dressing (or athletic supporter) which supports the scrotum can also reduce pain. Mild over-the-counter pain medication such as aspirin or acetaminophen (Tylenol) should be able to control any discomfort. Activities may be

Vasectomy is a surgical procedure performed on males in which the vas deferens (tubes that conduct sperm from the testicles to the penis) are cut, tied, cauterized, or otherwise interrupted. Although the testicles still produce sperm, the sperm die and are absorbed by the body. Men who have had vasectomies may continue to ejaculate the same amount of semen as before the procedure.
(Illustration by Electronic Illustrators Group.)
restricted for one or two days, and sexual intercourse for three to four days.

There are very few risks associated with vasectomy other than infection, bruising, epididymitis (inflammation of the tube that carries the sperm from the testicle to the penis), and sperm granulomas (collection of fluid that leaks from a poorly sealed or tied vas deferens). These are easily treated if they do occur. Patients do not experience difficulty achieving an erection, maintaining an erection, or ejaculating. There is no decrease in the production of the male hormone (testosterone), and sex drive and ability are not altered. Vasectomy is safer and less expensive than tubal ligation (sterilization of a female by cutting the fallopian tube to prevent conception).

Normally, vasectomies are 99% successful in preventing conception. As such, it is one of the most effective methods available to consumers.

Ejaculation — The act of expelling the sperm through the penis during orgasm.
Epididymitis — Inflammation of the small tube that rests on top of the testicle and is part of the system that carries sperm from the testicle to the penis. The condition can be successfully treated with antibiotics if necessary.
Scrotum — The sac which contains the testicles.
Sperm granuloma — A collection of fluid that leaks from an improperly sealed or tied vas deferens. They usually disappear on their own, but can be drained if necessary.
Testicles — The two egg-shaped organs found in the scrotum that produce sperm.
Tubal ligation — A surgical procedure in which the fallopian tubes are tied in two places and cut between. This prevents eggs from moving from the ovary to the uterus.
Gale Encyclopedia of Medicine. Copyright 2008 The Gale Group, Inc. All rights reserved.

[vah-sek´tah-me]
excision of the vas (ductus) deferens, or a portion of it; bilateral vasectomy results in sterility. 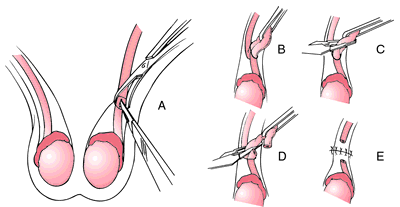 Vasectomy surgery. A, Incision exposes sheath, which is then opened. Vas is exposed (B) and occluded with two clips (C). D, Segment of about half an inch is excised. E, Vas is replaced in sheath and skin is sutured.
Miller-Keane Encyclopedia and Dictionary of Medicine, Nursing, and Allied Health, Seventh Edition. © 2003 by Saunders, an imprint of Elsevier, Inc. All rights reserved.

Male sterilisation in which a segment of the vas deferens arising from each testis is excised.
Segen's Medical Dictionary. © 2012 Farlex, Inc. All rights reserved.

Urology The surgical induction of infertility, denying sperm egress from the testes, by ligating or disrupting both vasa deferentia, a form of permanent contraception chosen by up to 500,000 US ♂/yr; 10-20 ejaculates are required post-procedure before the vasectomized are 'shooting blanks' and have no sperm; the vasectomized may experience long-term scrotal pain, possibly related to sperm granuloma formation;2⁄3 develop circulating antisperm antibodies. See In vitro fertilization, Post-vasectomy sperm count, Vasectomy reversal.
McGraw-Hill Concise Dictionary of Modern Medicine. © 2002 by The McGraw-Hill Companies, Inc.

(vas-ek'tŏ-mē)
Excision of a segment of the vas deferens, performed in association with prostatectomy, or to produce sterility.
Synonym(s): deferentectomy, gonangiectomy.
[vas- + G. ektomē, excision]
Medical Dictionary for the Health Professions and Nursing © Farlex 2012 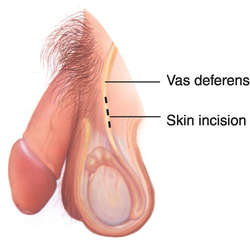 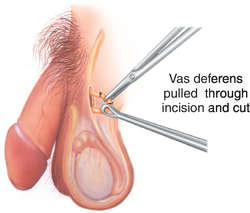 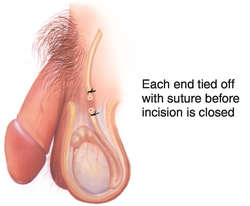 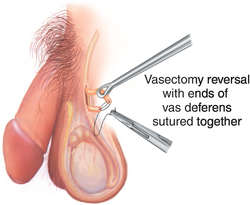 VASECTOMY AND ITS REVERSAL
Removal of all or a segment of the vas deferens. Bilateral vasectomy is the most successful method of male contraception. The procedure prevents sperm (which are manufactured in the testicles) from being expelled in the male ejaculate. It is usually carried out as an outpatient or same day procedure under local or light intravenous anesthesia. See: illustration

Persons who have had this surgical procedure ejaculate in a normal manner but the ejaculate contains semen, produced independently in the seminal vesicles, without sperm.

Postoperatively, the patient applies cold packs to the surgical site, to limit swelling, pain, and inflammation. Activities are limited, and sexual interest is avoided for the first week, approximately. An athletic supporter or tightly fitting underwear are worn to support the scrotum and limit pain. The procedure is considered successful when two consecutive sperm samples are shown to be free of sperm, typically 8 to 12 weeks postoperatively. Men choose vasectomy only when they want to become permanently sterile. Nonetheless, the procedure can be reversed, although vasectomy reversal is a more complicated operation than the initial severing of the tubes.

Patients should be advised that vasectomy does not prevent sexually transmitted diseases.
Medical Dictionary, © 2009 Farlex and Partners

The common operation for male sterilization. The VAS DEFERENS is exposed on each side through a short incision, just below the root of the penis, and is cut through and the ends tied off and secured well apart. Following this no newly produced spermatozoa can reach the exterior. The operation can be reversed but fertility is not always restored.
Collins Dictionary of Medicine © Robert M. Youngson 2004, 2005

a minor surgical operation, involving the cutting and separation of the cut ends of the VAS DEFERENS so that they cannot rejoin. Effectively, the operation prevents the sperm from mingling with the secretions of the accessory glands and thus acts as a means of BIRTH CONTROL. The resulting semen, therefore, lacks sperm, and although a normal ejaculation can be produced, there is no risk of fertilization. Sperm is reabsorbed in the vas deferens and there is usually no effect on sexual behaviour.
Collins Dictionary of Biology, 3rd ed. © W. G. Hale, V. A. Saunders, J. P. Margham 2005

Feedback
Flashcards & Bookmarks ?
Please log in or register to use Flashcards and Bookmarks. You can also log in with
Flashcards ?
My bookmarks ?
+ Add current page to bookmarks
Mentioned in ?
References in periodicals archive ?
He said: "I have legitimate reasons that I feel any reasonable person would understand as the sole reason for getting a vasectomy, let alone as just a supporting argument as to why I want one.
Man, 22, sets up GoFundMe page for vasectomy after NHS says he's "too young"; Conor Andrews was told he was "too young" and to come back when he was 30
This is why the commonest question when the vasectomy conversation comes up is if the procedure is reversible.
Why vasectomy must find its place in the family planning debate
The prevalence of vasectomy is on small-scale in developing countries.
ASSESSMENT OF PRACTICES AND PERCEPTIONS REGARDING VASECTOMY USING HEALTH BELIEF MODEL; A CROSS SECTIONAL SURVEY IN URBAN JHANG
prompting him to search for free vasectomy on Facebook,' Popcom said.
Want free vasectomy? Try Facebook search
Aside from bruising and swelling, vasectomy carries a slight risk of bleeding and infection.
Answers to questions about salt substitutes, vasectomy, and protein sources
However, scrotal swelling was noted in two bulls that were operated for open vasectomy. No such complications were noted in the bull operated laparoscopically.
Comparative Evaluation of Laparoscopic and Open Vasectomy Techniques in Teaser bulls
Vasectomy is a surgical procedure voluntarily sought by a normal client to end his fertility and hence the need for pain-free procedure and eliminating complications are most important factors for making a sterilisation procedure attractive to clients.
No needle no scalpel vasectomy--an Indian experience
Patient A, who was due to have scar tissue removed, was given a vasectomy by urology specialist Dr Nanikram Vaswani.
12-month ban for nurse at centre of vasectomy error
And yet, says Emily Jane Sullivan (presenting a study on the motivations and barriers that men in low- and middle-income countries face in deciding whether or not to undergo a vasectomy), men do want to take more responsibility in planning and managing their families.
'In FP, men are like Voldemort'
These were just among the "wrong notions and myths" that health officials have cited as the main reasons why men have refused to undergo vasectomy as an effective means of family planning.
Myths stymie success of vasectomy in PH
AS MANY as 14 people, including farmers and daily wage labourers, were duped to undergo vasectomy at a government hospital by a middleman, who had promised their families that he would help them in getting rid of their alcoholism.
Social worker dupes alcoholics into vasectomy