There are several theories as to the cause of clubfoot. A familial tendency or arrested growth during fetal life may contribute to its development, or it may be caused by a defect in the ovum. It sometimes accompanies meningomyelocele as a result of paralysis. In mild clubfoot there are slight changes in the structure of the foot; more severe cases involve orthopedic deformities of both the foot and leg. Although clubfoot is usually congenital, an occasional case in an older child may be caused by injury or poliomyelitis.

Treatment varies according to the severity of the deformity. Milder cases may be corrected with casts that are changed periodically, the foot being manipulated into position each time the cast is changed so that it gradually assumes normal position. A specially designed splint may also be used, made of two plates attached to shoes with a crossbar between the plates and special set screws so that the angulation of the foot can be changed as necessary. More severe deformities require surgery of the tendons and bones, followed by the application of a cast to maintain proper position of the joint. 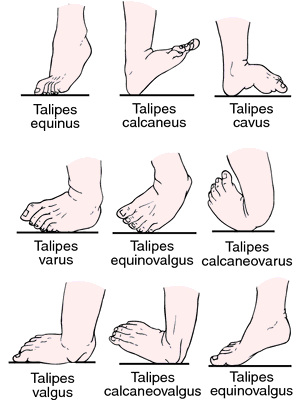 Talipes.
Miller-Keane Encyclopedia and Dictionary of Medicine, Nursing, and Allied Health, Seventh Edition. © 2003 by Saunders, an imprint of Elsevier, Inc. All rights reserved.

(val'gŭs), This form of the adjective is used only with masculine nouns (hallux valgus, plural halluces valgi). With feminine nouns the form valga is used (coxa valga, plural coxae valgae), and with neuter nouns the form valgum (genu valgum, plural genua valga). Do not confuse this word with varus.
Latin adjective describing any joint in an extremity that is deformed such that the more distal of the two bones forming the joint deviates away from the midline, as in knock-knee.
[Mod. L. turned outward, fr. L. bow-legged]
Farlex Partner Medical Dictionary © Farlex 2012

Orthopedics Fixation of an extremity in the position it would assume if everted; if in the frontal plane, the plantar surface is directed away from the midline. Cf Varus.
McGraw-Hill Concise Dictionary of Modern Medicine. © 2002 by The McGraw-Hill Companies, Inc.

(val'gŭs)
Descriptive of any of the paired joints of the extremities with a static angular deformity in which the bone distal to the joint deviates laterally from the longitudinal axis of the proximal bone, and from the midline of the body, when the subject is in anatomic position. The adjective valgus is attached sometimes to the name of the joint (cubitus valgus) and sometimes to the name of the part just distal to the joint (hallux valgus). The gender of the adjective matches that of the Latin noun to which it is joined; thus, cubitus, hallux, metatarsus, pes, talipes valgus; coxa, manus, talipomanus valga; genu valgum.
[Mod. L. turned outward, fr. L. bow-legged]
Medical Dictionary for the Health Professions and Nursing © Farlex 2012 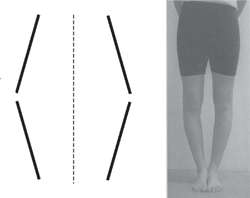 BOWLEG: In medical usage, referred to as “varus knee” or “genu varum.”

(val'gus) [L. valgus, valga, valgum bent, bent outward, bowleg(ged)]
Bent or turned outward, used esp. of deformities in which the most distal anatomical part is angled outward and away from the midline of the body. The classical Latin adjective valgus, valga, valgum means “bowleg” or “bowlegged” and applies to the appearance of the defect. The modern medical Latin adjective applies to the cause of the defect; thus a “valgus knee” is caused by the outward bendingof the tibia and fibula (away from the center of the body), resulting in “genu valgum, ” or “knock-knee.”
See: illustration; varus
Medical Dictionary, © 2009 Farlex and Partners

Feedback
Flashcards & Bookmarks ?
Please log in or register to use Flashcards and Bookmarks. You can also log in with
Flashcards ?
My bookmarks ?
+ Add current page to bookmarks
Mentioned in ?
References in periodicals archive ?
During pure valgus movement, it appears impingement does not affect the strain in the AM portion of the ACL.
Intercondylar Notch Impingement of the Anterior Cruciate Ligament: A Cadaveric In Vitro Study Using Robots
KEY WORDS: Adductor hallucis muscle; Lateral plantar nerve; Hallux valgus; Foot.
Caracteristicas Morfologicas y Morfometricas del Musculo Aductor del Hallux y sus Ramos Motores/Morphological and Morphometric Characteristics of the Hallux Adductor Muscle and its Motor Branches
The most common cause worsening the quality of life of people affected by hallux valgus is pain [1,2], which intensifies especially when walking, when the deformity rubs against the shoe.
The knowledge of beauty salon clients about hallux valgus therapy. Preliminary study
To perform the test, one hand should stabilize the metacarpal neck while the other grasps the proximal phalanx and controls rotation, because rotation of the phalanx can masquerade as valgus laxity (Fig.
The Stener Lesion and Complete Ulnar Collateral Ligament Injuries of the Thumb: A Review
Inconclusive support for valgus knee bracing, along with the high cost of equipment, should reserve this option for patients with advanced OA who do not respond to typical conservative management and who are unwilling or ill-advised to undergo knee arthroplasty.
MSK injury? Make splinting choices based on the evidence
Thirty-two participants (11 varus alignment, 11 neutral alignment, and 10 valgus alignment) participated in the study (Table 1).
Effects of Knee Alignments and Toe Clip on Frontal Plane Knee Biomechanics in Cycling
The most common mechanism of injury reported in this study, namely Mechanism M1 and M2 (solid foot plant with rotation of the knee, and solid foot plant with valgus stress on the knee, respectively) corresponded well with the findings of Boden et al.
Anterior cruciate ligament injuries of the knee: Patterns of association between the mechanism of injury and pathology visualised on magnetic resonance imaging
The initial orientation of the tibial cutting block ranged from 5[degrees] varus to 3.5[degrees] valgus. The initial orientation of the femoral cutting block was between 6[degrees] varus and 4[degrees] valgus, demonstrating a substantial variability with a significant number of outliers of the conventional technique (Figure 3).
The Impact of Pinless Navigation in Conventionally Aligned Total Knee Arthroplasty
After 10 months, he showed no instability, same preoperation motion, but with 23 degrees of valgus overcorrection.
Elbow Posterolateral Rotatory Instability due to Cubitus Varus and Overuse
Calcaneal Valgus (everted) & Navicular Collapse & Forefoot Abduction= Pronated
Pathomechanics of the Foot
In the human body, what is a hallux valgus more commonly known as?
14 quick questions..