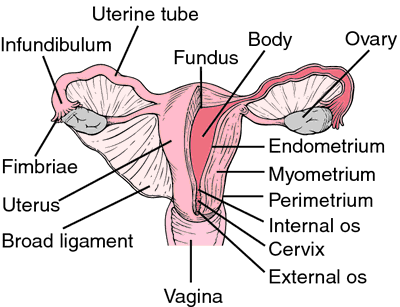 (yū'tĕr-ŭs dī-del'fis)
Double uterus with double cervix and double vagina; due to failure of the paramesonephric ducts to unite during embryonic development.
[G. di-, two, + delphys, womb]
Medical Dictionary for the Health Professions and Nursing © Farlex 2012 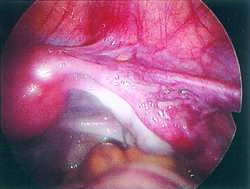 Feedback
Flashcards & Bookmarks ?
Please log in or register to use Flashcards and Bookmarks. You can also log in with
Flashcards ?
My bookmarks ?
+ Add current page to bookmarks
Mentioned in ?
References in periodicals archive ?
According to Christopher Ng of the GynaeMD Clinic in Singapore, uterus didelphys -- the condition of having two uteruses -- is "not as rare as people think".
Bangladeshi woman has twins 26 days after 1st delivery
Uterus didelphys associated with obstructed hemivagina and ipsilateral renal agenesis: MR findings in seven cases.
Obstructed Hemivagina and Ipsilateral Renal Anomaly (OHVIRA) Syndrome
Opacification through the orifice below the cyst initially led to the filling of two oblong cavities, each continuous by a filamentous and tortuous structure suggestive of the tubal morphology, with the left being opacified right up to the distal portions and peritoneal spillage of the contrast medium, thus confirming the uterus didelphys (Figures 5(a) and 5(b)).
Urethral Duplication with a Cystic Phallic Urethra Associated with a Uterus Didelphys, Partial Agenesis of the Tibia, and an Equinovarus Foot
Caption: Figure 1: Genital malformation with uterus didelphys and right renal agenesis characteristic of the syndrome.
Diagnosis and Treatment in a Tertiary Hospital of a Series of Complex Genital Malformations Corresponding to Double Uterus with Obstructed Hemivagina and Ipsilateral Renal Agenesis
An unusual case of septate uterus with double cervix and longitudinal vaginal septum simulating uterus didelphys. Int J Reprod Contracept Obstet Gynecol 2017;6(1):303-5.
RARE CASE REPORTS OF COMPLETE UTERINE SEPTUM WITH LONGITUDINAL VAGINAL SEPTUM PRESENTING AS DIDELPHIC/UNICORNUATE UTERUS
Uterus didelphys with an obstructed hemivagina and ipsilateral renal agenesis in teenagers: Report of three cases.
New Classification of Herlyn-Werner-Wunderlich Syndrome
She was taken to see a doctor and the diagnosis of Uterus didelphys was confirmed.
DOUBLE MIRACLE MOTHER; EXCLUSIVE Pregnant girl tells of the moment doctor told her 'you have one-in-a-million body' Lindsay shocked to find she has 2 reproductive systems
Generally, duplication is limited to the uterus and cervix (uterus didelphys bicollis), although duplication of the vulva, bladder, urethra, vagina, and anus have been described.
How to diagnose and repair congenital uterovaginal malformations: knowing when and how these abnormalities become apparent is the first step toward correcting them
Kersey reportedly was born with uterus didelphys. All three infants were confined to the hospital for 9 weeks after birth but reportedly are thriving after their release.
Must I separate you kids again?
The condition is known as uterus didelphys - and it means each of Liliya's twins developed in their own womb.
Proud mum shows off her one-in-50-million twins, born 11 weeks apart; Liliya Konovalova, 29, from Kazakhstan, had a premature daughter when she was 25 weeks pregnant, but her son was born two months later
The syndrome is characterized by uterus didelphys, obstructed hemivagina, and ipsilateral renal agenesis.
Herlyn-Werner-Wunderlich syndrome with ureteric remnant abscess managed laparoscopically: a case report
This syndrome is characterized by uterus didelphys with blind hemi vagina and ipsilateral renal agenesis.
Herlyn-Werner-Wunderlich syndrome (HWW syndrome): a case report