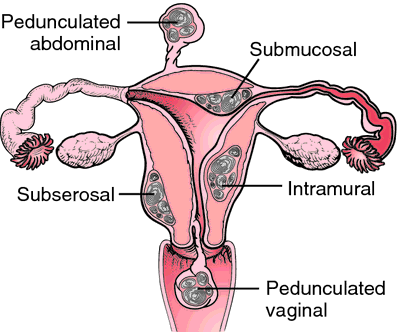 A leiomyoma of the uterus. It is the most common tumor of the female reproductive tract.

These tumors grow only during the reproductive years, often regressing after menopause. Surgical treatment (myomectomy or hysterectomy) may be necessary if tumors are more than 20 weeks' gestational size. Some tumors may be removed laproscopically although submucous tumors are removed by dilatation and curettage (D& C) or by hysteroscopy. Gonadotrophin-releasing hormones (GnRH) cause suppression of ovarian hormones and may cause tumors to shrink. Synonym: fibroid tumor; fibroid of uterus; fibromyoma (2); myoma uteri; uterine fibroma

Feedback
Flashcards & Bookmarks ?
Please log in or register to use Flashcards and Bookmarks. You can also log in with
Flashcards ?
My bookmarks ?
+ Add current page to bookmarks
Mentioned in ?
References in periodicals archive ?
ER-[beta] rs1271572 G/T polymorphism: The frequencies of genotype GG, GT and TT were 0% 77.3% and 22.7% in controls and 0%, 19.3% and 80.7% in patients with uterine leiomyoma, respectively.
Impact of Genetic Variants in Estrogen Receptor-[beta] Gene in the Etiology of Uterine Leiomyomas
Effect of different ingredients in traditional Korean medicine for human uterine leiomyoma on normal myometrial and leiomyomal smooth muscle cell proliferation.
Transcriptional profiling of uterine leiomyoma rats treated by a traditional herb pair, Curcumae rhizoma and Sparganii rhizoma
Entropy of T2-weighted imaging combined with apparent diffusion coefficient in prediction of uterine leiomyoma volume response after uterine artery embolization.
The utility of apparent diffusion coefficients for predicting treatment response to uterine arterial embolization for uterine leiomyomas: a systematic review and meta-analysis
Chromosome analysis of 96 uterine leiomyomas. Cancer Genet Cytogenet 1991; 55:11-8.
Incidental Detection of Maternal Neoplasia in Noninvasive Prenatal Testing
Uterine leiomyomas are highly common lesions of unclear etiology.
Chronic Inflammation May Enhance Leiomyoma Development by the Involvement of Progenitor Cells
The natural history of uterine leiomyomas: light and electron microscopic studies of fibroid phases, interstitial ischemia, inanosis, and reclamation.
LEIOMYOMLARIN MEDIKAL TEDAVISI/MEDICAL TREATMENT OF LEIOMYOMAS
Taboas et al., "Characterization of tissue biomechanics and mechanical signaling in uterine leiomyoma," Matrix Biology, vol.
The Rising Phoenix-Progesterone as the Main Target of the Medical Therapy for Leiomyoma
CYP1A1 and CYP1B1 genetic polymorphisms and uterine leiomyoma risk in Chinese women.
Combination effect of cytochrome P450 1A1 gene polymorphisms on uterine leiomyoma: a case-control study
This patient had undergone no previous surgical procedures, caesarean section, laparotomy or laparoscopy and had no history of uterine leiomyomas. The tumor grows in pregnancy due to maternal hormonal effect and this typically occurred in this patient.
LEIOMYOMA OF THE ANTERIOR ABDOMINAL WALL IN A 26 YEAR OLD PREGNANT WOMAN: A CASE REPORT
Intravenous leiomyomatosis with uterine leiomyoma and adenomyosis: a case presentation and brief comment on the histogenesis.
UTERINE FIBROIDS GOING INTO THE HEART: INTRAVASCULAR AND INTRA-CARDIAC LEIOMYOMATOSIS: A VERY UNUSUAL PRESENTATION
[USPRwire, Mon Oct 05 2015] Global Markets Direct's, 'Uterine Leiomyoma (Uterine Fibroids) - Pipeline Review, H2 2015', provides an overview of the Uterine Leiomyoma (Uterine Fibroids)'s therapeutic pipeline.
New Market Research Report: Uterine Leiomyoma (Uterine Fibroids) - Pipeline Review, H2 2015
Both lesions were similar to uterine leiomyoma. However, RCC has similar MRI features and it was not possible to rule out malignancy.
Bilateral renal leiomyoma with 5 year follow-up: case report