[pel´vis] (L.)
1. any basinlike structure in the body.
2. the bony pelvis, the lower (caudal) portion of the trunk of the body, forming a basin bounded anteriorly and laterally by the hip bones and posteriorly by the sacrum and coccyx; it is formed by the sacrum, the coccyx, and the ilium, pubis, and ischium, bones that also form the hip and the pubic arch. These bones are separate in the child, but become fused by adulthood. The pelvis is subjected to more stress than any other body structure. Its upper part, which is somewhat flared, supports the weight of internal organs in the upper part of the body. The floor of the pelvis or pelvic floor is the layer of tissue just below the outlet, formed by the coccygeal and levator ani muscles and the perineal fascia.

Pelvic structures in men and women differ both in shape and in relative size. The male pelvis is heart-shaped and narrow and proportionately heavier and stronger than that of the female, so that it is better suited for lifting and running. The female pelvis is constructed to accommodate the fetus during pregnancy and to facilitate its downward passage through the pelvic cavity in childbirth. The most obvious difference between the male and female pelvis is in the shape. A woman's hips are wider and her pelvic cavity is round and relatively large. There are differences in the shape of the female pelvis, which must be taken into account in childbirth. During pregnancy the capacity of the pelvis and the pelvic diameters are measured, so that possible complications during labor can be anticipated. 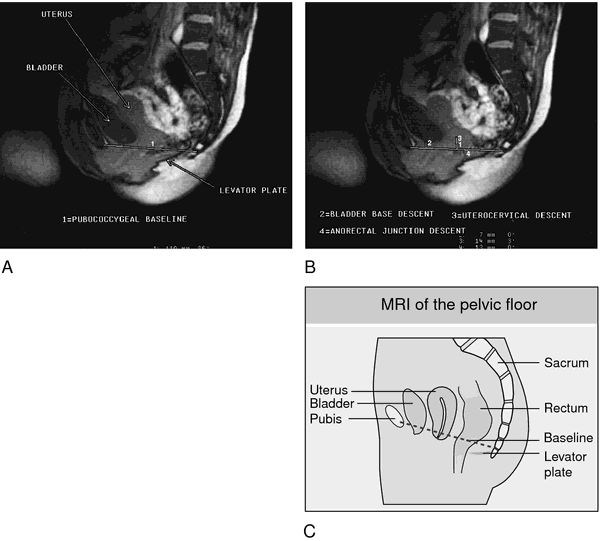 Dynamic pelvic floor imaging using MRI. MR sequences can now be acquired every half-second or so and this rapidity allows functional studies of the gastrointestinal tract to be undertaken. A and B, These sagittal views can be used to measure pelvic floor descent as well as to give valuable information on the local anatomy. C, Diagrammatic baseline sagittal view. (1 = pubococcygeal baseline; 2 = bladder base descent; 3 = uterocervical descent; 4 = anorectal junction descent.) From Aspinal and Taylor-Robinson, 2001.

Various types of pelvic inlets.
android pelvis one with a wedge-shaped inlet and narrow anterior segment typically found in the male.
anthropoid pelvis one whose anteroposterior diameter equals or exceeds the transverse diameter.
assimilation pelvis one in which the ilia articulate with the vertebral column higher (high assimilation pelvis) or lower (low assimilation pelvis) than normal, the number of lumbar vertebrae being correspondingly decreased or increased.
beaked pelvis one with the pelvic bones laterally compressed and their anterior junction pushed forward.
brachypellic pelvis a short oval type of pelvis, in which the transverse diameter exceeds the anteroposterior diameter by 1 to 3 cm.
contracted pelvis one showing a decrease of 1.5 to 2 cm in an important diameter; when all dimensions are proportionately diminished, it is a generally contracted pelvis.
cordate pelvis a heart-shaped pelvis.
dolichopellic pelvis a long, oval pelvis with the anteroposterior diameter greater than the transverse diameter.
extrarenal pelvis see renal pelvis.
false pelvis pelvis major.
flat pelvis one in which the anteroposterior dimension is abnormally reduced.
frozen pelvis a condition, due to infection or carcinoma, in which the adnexa and uterus are fixed in the pelvis.
funnel pelvis one with a normal inlet but a greatly narrowed outlet.
greater pelvis pelvis major.
gynecoid pelvis the normal female pelvis: a rounded oval pelvis with well rounded anterior and posterior segments.
infantile pelvis a generally contracted pelvis with an oval shape, a high sacrum, and inclination of the walls; called also juvenile pelvis.
pelvis jus´to ma´jor an unusually large gynecoid pelvis, with all dimensions increased.
pelvis jus´to mi´nor a small gynecoid pelvis, with all dimensions symmetrically reduced.
juvenile pelvis infantile pelvis.
kyphotic pelvis a deformed pelvis marked by increase of the conjugate diameter at the brim with decrease of the transverse diameter at the outlet.
lesser pelvis pelvis minor.
pelvis ma´jor the part of the pelvis superior to a plane passing through the ileopectineal lines. Called also false pelvis and greater pelvis.
pelvis mi´nor the part of the pelvis inferior to a plane passing through the ileopectineal lines. Called also lesser pelvis and true pelvis.
Nägele's pelvis one contracted in an oblique diameter, with complete ankylosis of the sacroiliac synchondrosis on one side and imperfect development of the sacrum and coxa on the same side.
Otto pelvis one in which the acetabulum is depressed, accompanied by protrusion of the femoral head into the pelvis.
platypellic pelvis (platypelloid pelvis) one shortened in the anteroposterior aspect, with a flattened transverse, oval shape.
rachitic pelvis one distorted as a result of rickets.
renal pelvis the funnel-shaped expansion of the upper end of the ureter into which the renal calices open; it is usually within the renal sinus, but under certain conditions a large part of it may be outside the kidney (extrarenal pelvis).
scoliotic pelvis one deformed as a result of scoliosis.
split pelvis one with a congenital separation at the symphysis pubis.
spondylolisthetic pelvis one in which the last, or rarely the fourth or third, lumbar vertebra is dislocated in front of the sacrum, more or less occluding the pelvic brim.
true pelvis pelvis minor.

[TA]
a flattened funnel-shaped expansion of the upper end of the ureter receiving the calices, the apex being continuous with the ureter.
Synonym(s): pelvis renalis [TA], ureteric pelvis

n.
The hollow funnel in the outlet of the kidney, into which urine is discharged before entering the ureter.

(rē'năl pel'vis) [TA]
A flattened funnel-shaped expansion of the upper end of the ureter receiving the calyces, the apex being continuous with the ureter.

The conical cavity lying on the inner side of the kidney into which all urine secreted by the kidney runs. The renal pelvis is connected directly to the ureter.

The middle section of the kidney where urine first collects after filtration from the blood.
Mentioned in: Hydronephrosis