[u´rāt]
a salt of uric acid.
Miller-Keane Encyclopedia and Dictionary of Medicine, Nursing, and Allied Health, Seventh Edition. © 2003 by Saunders, an imprint of Elsevier, Inc. All rights reserved.

(yūr'āt)
A salt of uric acid.
Medical Dictionary for the Health Professions and Nursing © Farlex 2012 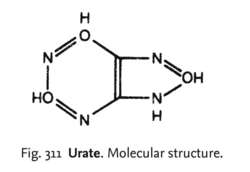 an end product of PURINE degradation in humans, which is excreted in the urine. Purine degradation proceeds further in other mammals so that urate is oxidized and ALLANTOIN, for example, is excreted. In land animals such as reptiles and birds, urate is excreted as the final product of nitrogen metabolism, instead of UREA, in order to conserve water. Purines are synthesized using their excess amino nitrogen and then degraded to urate. By eliminating nitrogen in this way there is a minimum of water loss and the urate is excreted either as a thick paste or as dry pellets. A high amount of urate in serum can cause gout, a disease that affects the joints and kidneys. Formula: C5H4N4O3.
Collins Dictionary of Biology, 3rd ed. © W. G. Hale, V. A. Saunders, J. P. Margham 2005

Feedback
Flashcards & Bookmarks ?
Please log in or register to use Flashcards and Bookmarks. You can also log in with
Flashcards ?
My bookmarks ?
+ Add current page to bookmarks
Mentioned in ?
References in periodicals archive ?
Asymptomatic hyperuricaemia is the 1st stage of gout in which the serum urate levels are raised.
Chronic tophaceous gout is caused by the formation of solid urate deposits--tophi--in the connective tissues, predominately of the fingers, toes, elbows and ears.
Gout
(10) In this study of 5,707 participants in the 2007-2008 NHANES, 74% had HTN, 71% had CKD stage 2 or higher, 53% were obese, 26% had diabetes, 24% had nephrolithiasis, 14% had myocardial infarction, 11% had heart failure, and 10% had suffered a stroke; the prevalence of these comorbidities were also noted to increase with the degree of hyperuricemia, supporting the notion that serum urate is related to the presence of several gout comorbidities, either as a marker of disease or perhaps by itself exacerbating other diseases.
The year in gout: 2011-2012
Results showed that the prevalence of gout, hyperuricemia, and high serum urate levels all significantly increased during the past 2 decades.
Gout upswing linked to obesity, hypertension
The chemistry of urates becomes more complicated once excreted by the kidneys.
Cloacolith in a blue-fronted Amazon parrot (Amazona aestiva)
The presence of monosodium urate monohydrate crystals in synovial fluid remains the gold standard for gout diagnosis, with a sensitivity of 84% and a specificity of 100%, according to new gout diagnostic guidelines issued by the European League Against Rheumatism.
Gout guidelines highlight risk factor analysis
If a 24-hour urine specimen is to be used for quantitative urate determination, NCCLS Document GP13-P does indeed state that the specimen should not be refrigerated.
Refrigerating urine for uric acid analysis
The above studies link meat and seafood, but not protein or dairy, to high serum urate levels.
Update on the management of hyperuricemia and gout
In theory, joints and synovial sheaths are target sites for urate deposits because the temperature is lower in these tissues than in the rest of the body, thereby lowering the solubility of sodium urate.
What is your diagnosis?
For example, they demonstrated that the adjuvant effect of the putative urate fraction was abrogated by the addition of uricase.
Hyperuricemia and gout: new insights into pathogenesis and treatment
There were no significant differences in age, uric acid levels in urine, or serum urate levels at the beginning of the treatment (Table 2).
Allopurinol, benzbromarone, or a combination in treating patients with gout: analysis of a series of outpatients
Of the remaining stone categories, urate or purine stones are the most common.
Cast in stone: the less-common kidney and bladder stones are no less problematic