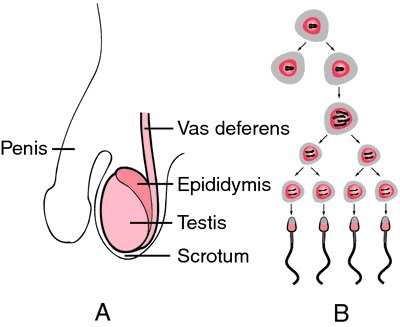 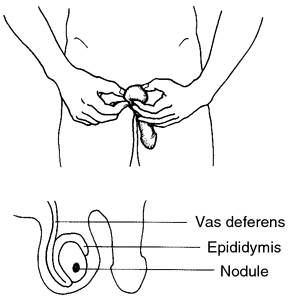 a testis that has not descended into the scrotum; palpable and nonpalpable (impalpable) variants exist.
Synonym(s): cryptorchid testis

(ŭn'dĕ-send'ĕd tes'tis)
A testis that has failed to descend into the scrotum; there are palpable and nonpalpable variants. 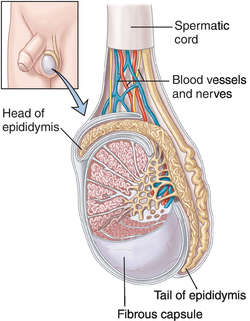 TESTIS
The male gonad; testicle. It is one of two reproductive glands located in the scrotum that produce the male reproductive cells (spermatozoa) and the male hormones testosterone and inhibin. See: illustration

Each is an ovoid body about 4 cm long and 2 to 2.5 cm in width and thickness, enclosed within a dense inelastic fibrous tunica albuginea. The testis is divided into numerous lobules separated by septa, each lobule containing one to three seminiferous tubules within which the spermatozoa are produced by meiosis. The lobules lead to straight ducts that join a plexus, the rete testis, from which 15 to 20 efferent ducts lead to the epididymis. The epididymis leads to the ductus deferens, through which sperm are conveyed to the urethra. Between the seminiferous tubules are the interstitial cells (cells of Leydig), which secrete testosterone. Within the tubules are sustentacular cells, which secrete inhibin. The testes are suspended from the body by the spermatic cord, a structure that extends from the inguinal ring to the testis and contains the ductus deferens, testicular vessels (spermatic artery, vein, lymph vessels), and nerves.

The migration of the testis from the abdominal cavity to the scrotum during fetal development.

A testis located abnormally within the inguinal canal or pelvis.

An inguinal testis near or superior to the femoral ring.

A testis reversed in the scrotum so that the epididymis attaches to the anterior instead of the posterior part of the gland.

A testis located in the perineal region outside the scrotum.

Feedback
Flashcards & Bookmarks ?
Please log in or register to use Flashcards and Bookmarks. You can also log in with
Flashcards ?
My bookmarks ?
+ Add current page to bookmarks
TheFreeDictionary presents:
Write what you mean clearly and correctly.
Mentioned in ?
References in periodicals archive ?
Undescended testis also appears to be at higher risk for torsion compared to the normally descended testis; this issue is relatively poorly addressed.
A rare presentation you want to remember!
Many of the undescended testis descend within one year of age, hence we should wait till one year of age.
"Clinical study and management of children with imperfect descent of testis"
During physical examination, a fine distinction must be made between a true undescended testis and a retractile testis.
EVALUATION OF THE AGE AT ORCHIOPEXY/PROCENA UZRASTA U KOM SE IZVODI ORHIDOPEKSIJA
Our first case was diagnosed with this condition, after Mullerian structures were recognized during surgical treatment of bilateral undescended testis.
A Novel Mutation of AMHR2 in Two Siblings with Persistent Mullerian Duct Syndrome
Humphrey, "Laparoscopy in the management of the impalpable undescended testis," British Journal of Surgery, vol.
Undescended Testes and Laparoscopy: Experience from the Developing World
Only one patient had another associated anomaly (a boy with an undescended testis).
Congenital Midline Cervical Cleft and W-Plasty: Our Experience
Current management of the undescended testis. Semin Pediatr Surg 1996; 5: 2-7.
A rare cause of acute abdomen: tumor rupture of nonpalpable testis
(4) Our index patient had a history of an undescended testis. (4)
Perforated caecal duplication cyst presenting as an appendicular abscess
The frequency of undescended testis from birth to adulthood: a review.
The undescended testicles of West Virginia: a single center experience
Other signs and symptoms are gynecomastia, undescended testis or cryptorchidism, epididymo-orchitis, hydrocele, dull ache or heavy sensation in the lower abdomen, anal area, or scrotum, and rarely infertility.
Malignant tumors of testis in Ajmer region
Background: Undescended testis is the most common congenital anomaly encountered in children.
EFFICACY OF SINGLE STAGE FOWLER STEPHEN ORCHIDOPEXY IN MANAGING IMPALPABLE UNDESCENDED TESTIS
Key Words: Undescended testis, cryptorchidism, orchidopexy, laparoscopy.
Undescended testes: a clinical and surgical review