[tim-pan´ik]
1. bell-like; resonant. Called also tympanal and tympanitic.
2. of or pertaining to the tympanum.
tympanic membrane a thin, semitransparent membrane, nearly oval in shape, that stretches across the ear canal and separates the tympanum (middle ear) from the external acoustic meatus (outer ear); called also eardrum. It is composed of fibrous tissue, covered with skin on the outside and mucous membrane on the inside. It is constructed so that it can vibrate freely with audible sound waves that travel inward from outside. The handle of the malleus of the middle ear is attached to the center of the membrane and receives the vibrations it collects, transmitting them to the other ossicles of the middle ear (the incus and stapes), which in turn transmit the vibrations to the fluid of the inner ear. 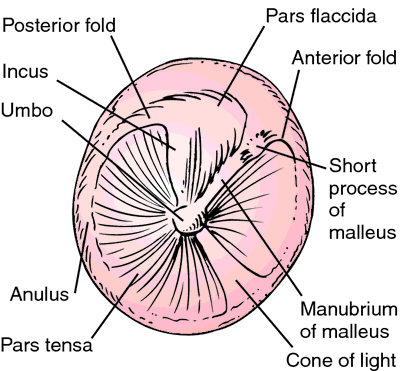 Tympanic membrane. From Jarvis, 1996.
Miller-Keane Encyclopedia and Dictionary of Medicine, Nursing, and Allied Health, Seventh Edition. © 2003 by Saunders, an imprint of Elsevier, Inc. All rights reserved.

Feedback
Flashcards & Bookmarks ?
Please log in or register to use Flashcards and Bookmarks. You can also log in with
Flashcards ?
My bookmarks ?
+ Add current page to bookmarks
Mentioned in ?
References in periodicals archive ?
Tegmina fully developed ; wings longer or shorter than the tegmen; fore coxae without spine; sometimes with small spine; femora spinoses on lower side, fore and mid tibiae with longitudinal upper groove and spinules on margin fore tibiae moderately and gradually widened at bases tympanal opening oval ,exposed and covered by membrane; subgenital plate of male bifurcate with long lobes or tubular, lack apical styles.
Fore and, mid tibiae un-cylindrical; with longitudinal upper groove or flate; mid tibiae with spinules on posterior margin; openings of tympanal organ on fore tibiae oval, exposed and membranous.
;wings longer than tegmen; fore coxae with long soine, femur with spinosa on lower side ;fore tibiae, mid\tibiae with longitudinal groove on upper side, tibiae widened basally; posterior opening of tympanal organ, oval, membranous exposed; anterior opening concealed by swelling; in from of wide slit externally; terminal abdominal tergite with tubercles; subgenital plate of male with styles; ovipositor not shorter then pronotum, varying in shape, fully developed.
Antennae, pliable, thin; pronotum conspicuous humeral notch on lateral lobes; tegmen not wide, but fully developed; wings longer than tegmen; fore coxae lack spines or with a small spinule; fore femora compressed laterally with longitudinal upper carina; lower side groove, serrate or with a large spine; fore tibiae with longitudinal upper groove; with spines on the posterior margin ; tympanal openings concealed by swellings in from of wide slit externally; subgenital plate of male with deeply bifurcate.
Systematic Study on the Various Tribes of Phaneropterinae (Tettigonioidea: Orthoptera) Occurring in Pakistan
The ears of the fly are endowed with two thin tympanal membranes, the eardrums, that are set very close together across the midline of the animal.
Taking place at the peripheral level of the tympanal membranes, the first step in the process of hearing pertains to the conversion of acoustic energy into mechanical energy.
In an effort to unite structure and function in a functional explanation, the reconstitution of actual tympanal deflections provides key information on the anatomical basis for the observed mechanical behavior.
The functional principle for this effect resides in the somewhat complex linear interaction between two coupled oscillators--the tympanal membranes.
Innovative Biomechanics for Directional Hearing in Small Flies
sphex of a spine on the ventral anterior margin of the tympanal ridge--is also found in most specimens of A.
Synonymies of wasp-mimicking species within the katydid genus Aganacris (Orthoptera: Tettigoniidae: haneropterinae)
Body 45 mm long (without ovipositor), ovipositor 14 mm long as preserved; fore tibia with two inner spines and one outer spine preserved, internal auditory organ perserved, tympanum longer than broad, widely ovoid auditory openings of a swollen tympanal chamber plainly visible just below the femoro-tibial joint
Revision and new taxa of fossil Prophalangopsidae (Orthoptera: Ensifera)
Tympanal organ well developed with a small tympanic lobe.
Genus Asiotmethis Uvarov (Orthoptera, Pamphagidae) from Turkey, with a checklist of known taxa
Yack's team is now trying to determine if the beetles have sound receptors called tympanals, which can pick up ultrasonic vibration.
Pop chirp bite crunch chew: the ultrasonic din of dying trees inspires a new kind of research to save forests from beetle attacks--and battle climate change