[TA]
the sharp-edged fold of mucous membrane overlying and incorporating the vocal ligament and the thyroarytenoid muscle and stretching along either wall of the larynx from the angle between the laminae of the thyroid cartilage to the vocal process of the arytenoid cartilage; air flow causes the vocal folds to vibrate in production of the voice.
Synonym(s): plica vocalis [TA], chorda vocalis, Ferrein cords, labium vocale, true vocal cord, vocal cord, vocal shelf

(vō'kăl fōld) [TA]
The sharp edge of a fold of mucous membrane overlying the vocal ligament and stretching along either wall of the larynx from the angle between the laminae of the thyroid cartilage to the vocal process of the arytenoid cartilage; the vocal folds are the agents concerned in voice production.
Synonym(s): plica vocalis [TA] , true vocal cord. 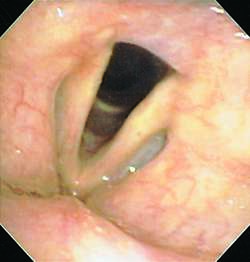 Either of two thin, reedlike folds of tissue within the larynx that vibrate as air passes between them, producing sounds that are the basis of speech.

Ventricular fold of the larynx.

Q. How can I fix my vocal cords? Please I am in need of desperate help.

A. rest, which means no talking,
More discussions about true vocal cord

Feedback
Flashcards & Bookmarks ?
Please log in or register to use Flashcards and Bookmarks. You can also log in with
Flashcards ?
My bookmarks ?
+ Add current page to bookmarks
TheFreeDictionary presents:
Write what you mean clearly and correctly.
Mentioned in ?
References in periodicals archive ?
In the true vocal cords, diminished height of the stratified squamous epithelium is observed as a result of desquamation Goblet cells are more in number in the lower part of the laryngeal mucosa as compared to the previous group (Fig.
Histogenesis and morphogenesis of human laryngeal epithelium: a prenatal study
Flexible laryngoscopy was performed in the office, revealing irregular thickening at the petiole of the epiglottis with bilateral false vocal cord fullness and granulation changes noted at the anterior aspects of both true vocal cords. There was decreased bilateral adduction and abduction noted on functional examination.
Stapler-assisted closure in total laryngectomy
Reinke's edema (RE) can be defined as unilateral or bilateral pale whitish swelling of the true vocal cords, which are filled with fluid and are mobile during phonation.
False-Positive Laryngeal FDG Uptake During PET/CT Imaging: Reinke's Edema
The condition consists of paradoxical adduction of the true vocal cords on inspiration and occasionally on early expiration as well (1,2).
Paradoxical vocal cord motion--a dangerous imitator of airway emergencies