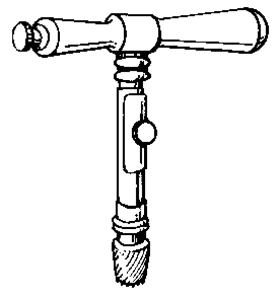 Trephine. From Dorland's, 2000.
2. an instrument for removing a circular area of cornea.
3. to remove with this instrument.

(trĭ-fīn′)
n.
A surgical instrument with a cylindrical saw usually used for removing a disk of bone, especially from the skull, or for removing corneal tissue.
tr.v. tre·phined, tre·phining, tre·phines
To operate on with a trephine.
treph′i·na′tion (trĕf′ə-nā′shən) n.

, trepan (trē-fīn', trĕ-pan')
1. A cylindric or crown saw used for the removal of a disc of bone, especially from the skull, or of other firm tissue as that of the cornea.
2. To remove a disc of bone or other tissue by means of a trephine.
[contrived fr. L. tres fines, three ends]

A hollow, cylindrical cutting instrument with the edge at one end sharpened or saw-toothed, used to cut a circular hole in bone or other tissue by pressure and rotation.

A small surgical instrument that is rotated to cut a circular incision.
Mentioned in: Corneal Transplantation

, trepan (trē-fīn', trĕ-pan')
1. A cylindric or crown saw used for the removal of a disc of bone, especially from the skull, or of other firm tissue.
2. To remove a disc of bone or other tissue by means of a trephine.
[contrived fr. L. tres fines, three ends]

Feedback
Flashcards & Bookmarks ?
Please log in or register to use Flashcards and Bookmarks. You can also log in with
Flashcards ?
My bookmarks ?
+ Add current page to bookmarks
TheFreeDictionary presents:
Write what you mean clearly and correctly.
Mentioned in ?
References in periodicals archive ?
Soto et al., "Radiological signs of syndrome of trephined," Neuroradiology, vol.
Mondon, "Sinking skin flap syndrome (or syndrome of trephined) a review," British Journal of Neurosurgery, vol.
Sinking Skin Flap Syndrome: Phenomenon of Neurological Deterioration after Decompressive Craniectomy
A study reported a syndrome characterised by persistent headache, dizziness, fatiguebility, cognitive and functional decline, irritability, epilepsy and psychiatric symptoms observed in patients with large cranial defects which they named as syndrome of the trephined.
Hence, early cranioplasty with autologous bone flap preserved in the abdominal pouch improved rehabilitation without exposing the patients to late complications like syndrome of the trephined, and relatively low morbidity.
Effect of cranioplasty on cerebro-Spinal fluid hydrodynamics in patients with the syndrome of the trephined. Acta Neurochir (Wien).1984; 70: 21-30.
Early autologous cranioplasty after decompressive hemi-craniectomy for severe traumatic brain injury
Evidence supporting the organic basis of the syndrome of the trephined is the improvement in symptoms following cranioplasty with the reversion of intracranial pressure relationships to normal.
11 patients had pre-operative symptoms, out of which 3 patients had only headache and 8 patients had "syndrome of trephined".
(6,7,8) In our study 8 patients with "Syndrome of trephined" reported that they had improved after cranioplasty.
Outcome, complications after cranioplasty following decompressive craniectomy: a prospective study
After a TKP assisted PPV, an allograft corneal transplant was not performed at the same time; instead, the patient's trephined corneal button was sutured back.
The pathologic cornea was trephined and the corneal button was protected by a viscoelastic material and kept in a humid container.
Suturing back the patient's trephined corneal button allows the PKP to be performed in a relatively quiet eye and provides sufficient time for waiting for the donor.
Anatomical outcome of vitreoretinal surgery using temporary keratoprosthesis and replacement of the trephined corneal button for severe open globe injuries: One-year result