[trans″po-zish´un]
displacement to the opposite side; in genetics, the nonreciprocal insertion of material deleted from one chromosome into another, nonhomologous chromosome.
transposition of great vessels a congenital heart defect in which the position of the chief blood vessels of the heart is reversed, so that the aorta arises from the right ventricle instead of the left and the pulmonary artery emerges from the left ventricle rather than from the right. The result is that oxygen-poor blood returning from the systemic circulation to the right side of the heart gets pumped back into the general circulation instead of being transported to the lungs, and oxygen-rich blood flows aimlessly to and from the lungs. The condition may be corrected by surgery. 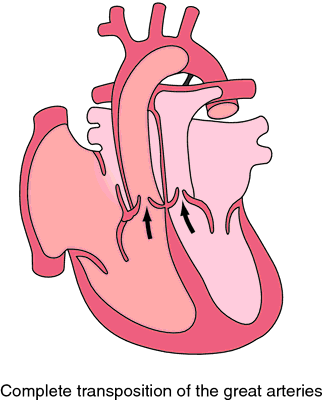 (trans-pō-zi'shŭn),
1. Removal from one place to another; metathesis.
2. The condition of being in the wrong place or on the wrong side of the body (for example, viscera placed opposite their normal position; such as liver on the left or apex of heart on right).
3. Movement to a new site in the genome.
4. Misplacement of teeth from normal sequence in the arch.

(trăns′pə-zĭsh′ən)
n.
Genetics Transfer of a segment of DNA to a new position on the same or another chromosome or plasmid.
trans′po·si′tion·al adj.

Pediatrics A malposition of an organ or tissues that occurs during embryogenesis Psychiatry See Gender identity transposition Surgery Plastic surgery in which a flap of tissue is moved from one site to another and allowed sufficient time to establish a new blood supply before severing the vascular connection with the donor site. See Sensory nerve transposition.

(trans'pŏ-zish'ŭn)
1. Removal from one place to another; metathesis.
2. The condition of being transposed to the wrong side of the body, as in transposition of the viscera, in which the viscera are located opposite their normal position.
3. Positioning of teeth out of their normal sequence in an arch.

In genetics, the movement of a length of genetic material from one point in a DNA molecule to another.

1. The act of converting the prescription of an ophthalmic lens from a sphere with minus cylinder form to a sphere with plus cylinder form or vice versa. Example: −3 D sphere −2 D cylinder axis 180º transposes to −5 D sphere +2 D cylinder axis 90º.
2. A surgical procedure used to correct muscle paralysis. In this procedure, adjacent muscles are transferred (transposed) to the paralysed muscle, allowing for partial movement in the field of action of the paretic muscle. There are various procedures: one in which parts of the recti muscles are sutured together (the superior and inferior recti are disinserted and joined to the lateral rectus) to correct lateral rectus palsy and improve abduction (Hummelsheim's procedure or

(trans'pŏ-zish'ŭn)
1. Misplacement of teeth from normal sequence in the arch.
2. Removal from one place to another; metathesis.
3. Condition of being in wrong place or on wrong side of the body.

Feedback
Flashcards & Bookmarks ?
Please log in or register to use Flashcards and Bookmarks. You can also log in with
Flashcards ?
My bookmarks ?
+ Add current page to bookmarks
TheFreeDictionary presents:
Write what you mean clearly and correctly.
Mentioned in ?
References in periodicals archive ?
However, there was no significant difference in the within-subject effect of the anterior subcutaneous transposition of the ulnar nerve in ROMs ( P > 0.05) [Table 2].
The ulnar nerve may be compressed at five anatomical sites proximally to distally: at the arcade of Struthers, the medial intermuscular septum, epicondylar groove, Osborne's ligament (the roof of the actual boundary of the cubital tunnel), and flexor-pronator aponeurosis; the epicondylar groove and Osborne's ligament are the most frequent areas.[2],[25] The effective surgical treatment for nerve entrapment is timely decompression, involving several controversial approaches typically involving one of the following: in situ decompression (open or endoscopic), medial epicondylectomy, or anterior transposition (subcutaneous, submuscular, or intramuscular).[7],[8],[9],[10],[11],[12],[13] None of these are considered superior to the others.
Anterior Subcutaneous Transposition of the Ulnar Nerve Affects Elbow Range of Motion: A Mean 13.5 Years of Follow-up
An interchange in the position of two adjacent teeth in the same quadrant of the dental arch is referred to by the term transposition. This unusual occurrence has been observed and has also been reported since the 19th century (1).
Bilaterally, a transposition was seen with respect to the maxillary first premolars and canines (Figure 1).
Bilateral transposition--a rare case with a literature review/Bilateral transpozisyon--literatur taramasi esliginde nadir bir vaka
Tooth transposition has been reported to be associated with other dental anomalies such as missing teeth, small or peg-shaped maxillary lateral incisors, retained deciduous mandibular lateral incisors and canines, rotations and malposition of adjacent teeth, and root dilacerations and impactions [22].
The purpose of this article is primarily to emphasize early diagnosis and detection of bilateral mandibular tooth transposition and describe its orthodontic management and outcome.
Mandibular Symmetrical Bilateral Canine-Lateral Incisors Transposition: Its Early Diagnosis and Treatment Considerations
Among the differences between Q and F, some of which have been incorporated into differences between `The History' and `The Tragedy', are variants involving transposition. I have already mentioned two cases of ordinary transposition: Q1: `I good my Lord' / F: `I my good Lord' (TLN 112; so H 1.981 / 1.1.105); Q1: `I have often heard him' / F: `I have heard him oft' (TLN 405; so H 2.71 / T 1.2.73).
More interesting is the transposition at the end of 3.1:
'Which is the iustice, which is the theefe': variants of transposition in the texts of 'King Lear.'
LS: Will this theoretical position be perceptible in the show, if we agree that art is, by definition, transposition? This was, after all, Bataille's position on art.
What you set up was the opposition between transposition, which is a mediation, and an unmediated experience.
Down and dirty
First off, I have ignored all transpositions of element names.
Elementary transadditions
"In the test tube, they perform the transposition reaction with gusto," says Schatz.
The Accidental Immune System