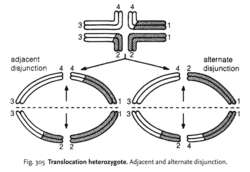 an individual carrying cells with one normal set of chromosomes and one set in which a reciprocal TRANSLOCATION has occurred between two non-HOMOLOGOUS CHROMOSOMES. See Fig. 304 . Such an event causes pairing problems in prophase 1 of MEIOSIS when the chromatids undergo SYNAPSIS (2). These problems are solved by producing a cross-shaped configuration where all chromosomal segments are correctly paired.

When the chromatids separate they can do so in two ways, ‘adjacent’ or ‘alternate’ disjunction. See Fig. 305 . Adjacent disjunction produces gametes that have duplicated and deficient chromosomal segments, and therefore produces gametes that can cause death in the offspring. Alternate disjunction, produced by a twisting of the cross, results in a mixture of completely normal gametes and ones containing a balanced translocation. These types are both viable and the progeny will all survive. The overall result of a translocation heterozygote is that about half of the progeny survive, a fact that has been used in experiments to control insect populations.