[to´fus] (L.)
1. a chalky deposit of sodium urate occurring in gout; tophi form most often around the joints in cartilage, bone, bursae, and subcutaneous tissue and in the external ear, producing a chronic, foreign-body inflammatory response.
2. dental calculus. 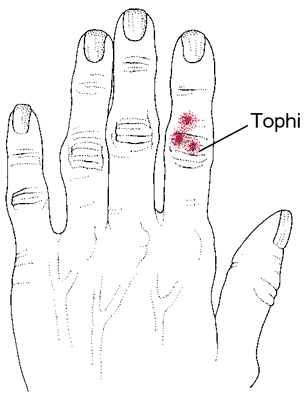 Tophus. Typical appearance of tophi, which are common in chronic gout, shown on an index finger. From Ignatavicius and Workman, 2000.
tophus syphili´ticus syphilitic node.
Miller-Keane Encyclopedia and Dictionary of Medicine, Nursing, and Allied Health, Seventh Edition. © 2003 by Saunders, an imprint of Elsevier, Inc. All rights reserved.

(tō′fəs)
n. pl. to·phi (-fī)
1. A deposit of urates in the skin and tissue around a joint or in the external ear, occurring in gout. Also called chalkstone.
2. A concretion of mineral salts and organic matter deposited on the surface of the teeth.
The American Heritage® Medical Dictionary Copyright © 2007, 2004 by Houghton Mifflin Company. Published by Houghton Mifflin Company. All rights reserved.

The pathognomonic lesion of gout, which appears grossly when preserved in alcohol or other non-aqueous solution as a nodular mass of white chalky, pasty material composed of crystalline and amorphous urates–eg, monosodium urate monohydrates, surrounded by mononuclear cells, fibroblasts and a foreign body-type giant cell reaction with epithelioid histiocytes. See Gouty toe.
McGraw-Hill Concise Dictionary of Modern Medicine. © 2002 by The McGraw-Hill Companies, Inc. 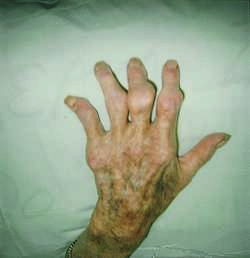 TOPHI: Left and right hands of a patient with multiple deforming gouty tophi 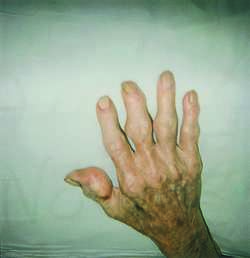 TOPHI: Left and right hands of a patient with multiple deforming gouty tophi

(to'fus) plural.tophi [L., porous stone]
A deposit of sodium biurate in tissues near a joint, in the ear, or elsewhere in individuals with gout.
Synonym: gouty pearl See: illustration
Medical Dictionary, © 2009 Farlex and Partners

A chalky deposit of a uric acid compound found in gout. Tophi occur most frequently around joints and in the external ear.
Mentioned in: Gout
Gale Encyclopedia of Medicine. Copyright 2008 The Gale Group, Inc. All rights reserved.

Feedback
Flashcards & Bookmarks ?
Please log in or register to use Flashcards and Bookmarks. You can also log in with
Flashcards ?
My bookmarks ?
+ Add current page to bookmarks
Mentioned in ?
References in periodicals archive ?
Malignant fibrous histiocytoma arising in a gouty tophus at the second metacarpophalangeal joint.
Unusual Presentation of Bilaterally Symmetrical Gout Tophi on Elbows
Hemilaterally symptomatic bipartite patella associated with bone erosions arising from a gouty tophus: A case report.
Bipartite patella associated with tophaceous invasion: A rare case report
Only two reports were found in the literature describing symptoms due to a single gouty tophus. Law and coworkers (5) presented a patient who complained of anterior knee pain and limited ROM from 10[degrees] to 100[degrees] of flexion, who was found to have a single tophus in the patellofemoral compartment.
Knee extension loss secondary to a "Cyclops-Like" gouty tophus: a case report and literature review
With the advent of the disease, a tophus may cause persistent pain that impairs foot function, superimposed infection and uncontrolled drainage, or enlargement of a digit.
Unusual gouty tophi simulating malignancy
Orienting Joseph's left foot directly toward the viewer, as Martini has done, gives the tophus the greatest degree of visual emphasis.
St Joseph's foot deformity in Italian renaissance art
The serum urate level should be lowered to 6 mg/dl for the prevention of attacks and tophus regression, and xanthine oxidase inhibitor allopurinol is used for this purpose.
Musculoskeletal problems in diabetes mellitus
"Dr Pascual's findings are exciting and have further opened a door into an area of tophus development that until now has been somewhat elusive.
Insights enable novel therapies
He underwent excision of the olecranon bursae and biopsy from the tophus involving first toe three years ago.
Unusual presentation of gout: intratendinous tophus in the patellar tendon
Patients also had to have at least one measurable tophus on the hands/wrists and/or feet/ ankles at least 5 mm in width and up to 20 mm in length.
FDA advisory panel recommends lesinurad for gout
The presence of monosodium urate monohydrate crystals in a symptomatic joint, bursa, or tophus is sufficient to diagnose gout, according to new gout classification criteria from the American College of Rheumatology and the European League Against Rheumatism.
New gout classification criteria call crystals diagnostic
The crystals then promote further degradation of the cartilage matrix through tophus formation and inflammation.
The unique macroscopic appearance of gouty arthritis of the knee
The differential diagnosis includes cellulitis, eruptive xanthoma, and gouty tophus.
Erythematous plaque with yellowish papules on the shin: was the eruption on our patient's leg related to the treatment he received during his hospitalization?