Also found in: Dictionary, Thesaurus, Encyclopedia, Wikipedia.
Related to tinea pedis: tinea capitis, Tinea manuum
?Note: This page may contain content that is offensive or inappropriate for some readers.

dermatophytosis of the feet, especially of the skin between the toes, caused by one of the dermatophytes, usually a species of Trichophyton or Epidermophyton; the disease consists of small vesicles, fissures, scaling, maceration, and eroded areas between the toes and on the plantar surface of the foot; other skin areas may be involved.
Synonym(s): athlete's foot, dermatomycosis pedis, ringworm of foot
Farlex Partner Medical Dictionary © Farlex 2012

(tin'ē-ă ped'is)
Dermatophytosis of the feet, especially of the skin between the toes, caused by one of the dermatophytes, usually a species of Trichophyton or Epidermophyton; the disease consists of small vesicles, fissures, scaling, maceration, and eroded areas between the toes and on the plantar surface of the foot; other skin areas may be involved.
Synonym(s): athlete's foot.
Medical Dictionary for the Health Professions and Nursing © Farlex 2012 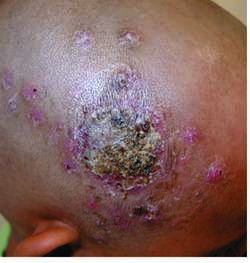 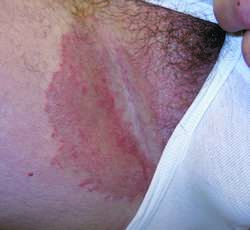 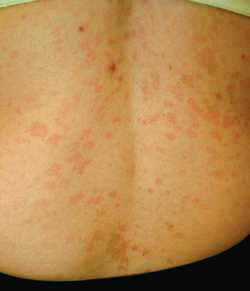 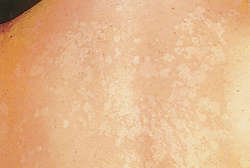 Involvement of the skin between the toes and, sometimes, the remainder of the skin of the foot, with the fungus infection TINEA.
Collins Dictionary of Medicine © Robert M. Youngson 2004, 2005

Fungal infection of the feet of the skin characterized by dry, scaly lesions.
Mentioned in: Hyperhidrosis
Gale Encyclopedia of Medicine. Copyright 2008 The Gale Group, Inc. All rights reserved.

Q. what else besides athletes foot can cause painful itchy burn tops of toes if the toes are bumped they throb and it hurts to flex toes, small red spots on toes

A. maybe only an allergic reaction is able to do so. but i would go on the athlete foot theory. or as they say "it's much more common to find horses and not zebras in America" 99% of the time it's an athlete foot. but it's o.k- it's relatively easy treatment.
More discussions about tinea pedis
This content is provided by iMedix and is subject to iMedix Terms. The Questions and Answers are not endorsed or recommended and are made available by patients, not doctors.