[tib´e-ah]
the inner and larger of the two bones of the lower leg; it articulates with the femur and head of the fibula above and with the talus below. See appendix 3-3 and see color plates. 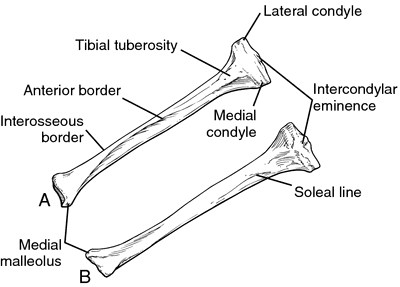 Tibia. Anterior (A) and posterior (B) views of the right tibia. From Dorland's, 2000.
tibia val´ga a bowing of the leg in which the angulation is away from the midline of the body.
tibia va´ra medial angulation of the tibia in the metaphyseal region, due to a growth disturbance of the medial aspect of the proximal tibial epiphysis; there are both infantile and adolescent types. Called also Blount's disease.
Miller-Keane Encyclopedia and Dictionary of Medicine, Nursing, and Allied Health, Seventh Edition. © 2003 by Saunders, an imprint of Elsevier, Inc. All rights reserved.

(tib'ē-ă, tib'ē-ē), [TA]
The medial and larger of the two bones of the leg, articulating with the femur, fibula, and talus.
Synonym(s): shin bone
[L. the large shinbone]
Farlex Partner Medical Dictionary © Farlex 2012

(tĭb′ē-ə)
n. pl. tib·iae (-ē-ē′) or tib·ias
1.
a. The inner and larger of the two bones of the lower human leg, extending from the knee to the ankle.
b. A corresponding bone in other vertebrates. Also called shinbone.
2. The fourth division of an insect's leg, between the femur and the tarsus.
tib′i·al adj.
The American Heritage® Medical Dictionary Copyright © 2007, 2004 by Houghton Mifflin Company. Published by Houghton Mifflin Company. All rights reserved.

, pl. tibiae (tib'ē-ă, -ē) [TA]
The medial and larger of the two bones of the leg, articulating with the femur, fibula, and talus.
Synonym(s): shin bone.
[L. the large shinbone]
Medical Dictionary for the Health Professions and Nursing © Farlex 2012

The shin bone, the stronger of the two long bones in the lower leg. The front surface of the tibia lies immediately beneath the skin. Its upper end articulates with the femur (thigh bone) to form the knee joint and the lower end forms part of the ankle joint. Its companion bone, the fibula, lies on its outer side and is attached to it by ligaments.
Collins Dictionary of Medicine © Robert M. Youngson 2004, 2005

the anterior of the two long bones articulating in the hind limb, proximally with the femur, and distally with the tarsal bones. see PENTADACTYL LIMB. In humans, the tibia is the shinbone. In insects, it is the fourth segment from the base of the leg.
Collins Dictionary of Biology, 3rd ed. © W. G. Hale, V. A. Saunders, J. P. Margham 2005

One of the two bones of the lower leg.
Mentioned in: Osteomyelitis
Gale Encyclopedia of Medicine. Copyright 2008 The Gale Group, Inc. All rights reserved.

Feedback
Flashcards & Bookmarks ?
Please log in or register to use Flashcards and Bookmarks. You can also log in with
Flashcards ?
My bookmarks ?
+ Add current page to bookmarks
Mentioned in ?
References in periodicals archive ?
En condiciones normales, el margen superior de la epifisis proximal del perone debe estar a nivel de la fisis, proximal de la tibia, y la fisis distal del perone debe estar a nivel del domo talar.
Hemimelia del perone y la tibia, mas que un hueso ausente: presentacion de casos
Magnetic resonance imaging (MRI) coronal views of both tibias. T1-weighted images show low intensity intramedullary lesions in both tibias.
Bilateral Tibial Fibrous Dysplasia in a Pediatric Patient treated with Intramedullary Nailing
Out of 23 bones with double foramina, 20 (87%) were femur, 2 (8.65%) were tibia, and only 1 (4.35%) was fibula with a double foramina (Figure 7).
Morphological and Topographical Anatomy of Nutrient Foramen in The Lower Limb Long Bones/Alt Ekstremite Uzun Kemiklerinde Foramen Nutricium'larin Morfolojik ve Topografk Anatomisi
To our knowledge, this is the first case of total knee arthroplasty after correction of extra-articular deformity in tibia using clamshell osteotomy.
Total Knee Arthroplasty after Correction of Tibial Diaphyseal Nonunion with Clamshell Osteotomy
Treatment of distal tibia fractures without articular involvement: a systematic review of 1125 fractures.
MIPO IN DISTAL TIBIAL METAPHYSEAL FRACTURES A COMPARISON AMONG DCP, LCP AND PRE-CONTOURED DT-LCP
The measured fML, fLAP and fMAP of Han Chinese were larger than the previous study (Wang et al., 1992; Cheng et al.), maybe as a result of different definition of measured length of femur and tibia or measured methods.
Morphological Measurements of the Normal Distal Femur and Proximal Tibia between Han Chinese and Mongolian Chinese in a Healthy Chinese Population/Mediciones Morfologicas del Femur Distal Normal y la Tibia Proximal entre Chinos Han y Mongoles en una Poblacion China Sana
In conclusion, in the current study quails fed Ca-P-deficient diet supplemented with 5 [micro]g [kg.sup.-1] of 1[alpha]-OH[D.sub.3] in combination of 500 FTU [kg.sup.-1] of phytase were able to achieve the same tibia ash and Ca compared with quails fed Ca-P-adequate when dietary nonphytate phosphorus and Ca levels were 0.15% and 0.6%, respectively, whereas addition of 1[alpha]-OH-[D.sub.3] alone or in combination with phytase could not maximize growth performance of quails.
Influence of dietary 1[alpha]lpha-hydroxycholecalciferol, individually or in combination with microbial phytase in calcium and phosphorus deficient diets on growth performance and tibia parameter of Japanese quails (Coturnix japonica)
Nahrendorf's team detected the channels throughout the skull as well as in the tibia, which led them to search for similar features in the human skull.
Secret Tunnels Between Skull and Brain
Generally, the surgeon passes a suture line around the dog's lateral fabella and through a hole drilled into the tibia, creating an artificial ligament of sorts outside the joint.
Oh Cruciate! He Busted His Knee: First you notice a limp or reluctance to bear weight
High energy distal tibia fractures have associated distal ipsilateral fibula fractures up to 85% of the time.
Biomechanics of the Injured Fibula Following Plate Fixation of a Concomitant Tibia Fracture To Fix or Not to Fix?
At 21 days of age, the highest tibia Ca values were obtained in birds fed negative control diet supplemented with 150 mg/kg WS or WC with no dietary supplementation of 1, 25-(OH)2 D3 (38.652 and 38.433 % respectively).
EFFECTS OF TWO PLANT EXTRACTS AND VITAMIN D3 ON BONE MECHANICAL AND HISTOLOGICAL PROPERTIES OF BROILER CHICKENS