[kri´sis] (pl. cri´ses) (L.)
1. the turning point of a disease for better or worse; especially a sudden change, usually for the better, in the course of an acute disease.
2. a sudden paroxysmal intensification of symptoms in the course of a disease.
3. life crisis.
addisonian crisis (adrenal crisis) the symptoms accompanying an acute onset or worsening of addison's disease: anorexia, vomiting, abdominal pain, apathy, confusion, extreme weakness, and hypotension; if untreated these progress to shock and then death.
aplastic crisis a sickle cell crisis in which there is temporary bone marrow aplasia.
blast crisis a sudden, severe change in the course of chronic granulocytic leukemia, characterized by an increased number of blasts, i.e., myeloblasts or lymphoblasts.
catathymic crisis an isolated, nonrepetitive act of violence that develops as a result of intolerable tension.
celiac crisis an attack of severe watery diarrhea and vomiting producing dehydration and acidosis, sometimes occurring in infants with celiac disease.
developmental crisis maturational crisis.
hemolytic crisis an uncommon sickle cell crisis in which there is acute red blood cell destruction with jaundice.
hypertensive crisis dangerously high blood pressure of acute onset.
identity crisis a period in the psychosocial development of an individual, usually occurring during adolescence, manifested by a loss of the sense of the sameness and historical continuity of one's self, confusion over values, or an inability to accept the role the individual perceives as being expected by society.
life crisis a period of disorganization that occurs when a person meets an obstacle to an important life goal, such as the sudden death of a family member, a difficult family conflict, an incident of domestic violence (spouse or child abuse), a serious accident, loss of a limb, loss of a job, or rape or attempted rape.
maturational crisis a life crisis in which usual coping mechanisms are inadequate in dealing with a stress common to a particular stage in the life cycle or with stress caused by a transition from one stage to another. Called also developmental crisis.
myasthenic crisis the sudden development of dyspnea requiring respiratory support in myasthenia gravis; the crisis is usually transient, lasting several days, and accompanied by fever.
oculogyric crisis a symptom of an acute dystonic reaction in which the person demonstrates a fixed gaze, usually upward; also, the uncontrollable rolling upwards of the eye. It can be a result of encephalitis or a reaction to antipsychotic medications.
salt-losing crisis see salt-losing crisis.
sickle cell crisis see sickle cell crisis.
tabetic crisis a painful paroxysm occurring in tabes dorsalis.
thyroid crisis (thyrotoxic crisis) see thyroid crisis.
vaso-occlusive crisis a sickle cell crisis in which there is severe pain due to infarctions in the bones, joints, lungs, liver, spleen, kidney, eye, or central nervous system. 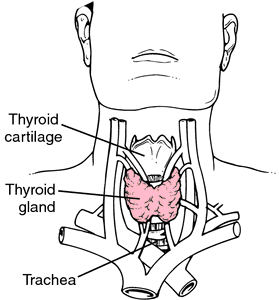 Secretion of thyroid hormones is regulated by the hypothalamus-pituitary-thyroid control system. Internal environmental conditions, such as low thyroid hormone and norepinephrine serum levels, or external factors, such as cold and stress, activate the hypothalamus, which secretes thyrotropin-releasing hormone (TRH). This hormone acts on the pituitary gland and brings about the release of thyroid-stimulating hormone (TSH). The TSH then stimulates the release of thyroid hormones such as T3 and T4 from the thyroid gland. When sufficient levels of serum thyroxine and other thyroid hormones have been reached, there is negative feedback to the hypothalamus and TRH is no longer secreted. See also hypothyroidism and hyperthyroidism.
thyroid-stimulating hormone test a thyroid function test in which thyrotropin (thyroid-stimulating hormone) is administered intramuscularly and the thyroid gland is monitored over time with scintiscanning or radioimmunoassays for a response or areas of decreased responsiveness. Called also TSH test and TSH stimulation test.
Miller-Keane Encyclopedia and Dictionary of Medicine, Nursing, and Allied Health, Seventh Edition. © 2003 by Saunders, an imprint of Elsevier, Inc. All rights reserved.

, thyroid crisis
the exacerbation of symptoms of hyperthyroidism; severe thyrotoxicosis; can follow shock or injury or thyroidectomy; marked by rapid pulse (140-170/minute), nausea, diarrhea, fever, loss of weight, extreme nervousness, and a sudden rise in the metabolic rate; coma and death may occur; occasionally the entire clinical picture is that of profound prostration, weakness, and collapse, without the phase of muscular overactivity and tachycardia.
Synonym(s): thyroid storm
Farlex Partner Medical Dictionary © Farlex 2012