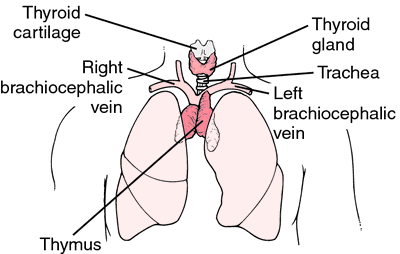 (thī'mŭs, thī'mī, thī'mus-ez), [TA]
[TA] A primary lymphoid organ, located in the superior and anterior mediastinum and lower part of the neck, that is necessary in early life for the normal development of immunologic function. It reaches its greatest relative weight shortly after birth and its greatest absolute weight at puberty; it then begins to involute, and much of the lymphoid tissue is replaced by fat. The thymus consists of two irregularly shaped parts united by a connective tissue capsule. Each part is partially subdivided by connective tissue septa into lobules, 0.5-2 mm in diameter, which consist of an inner medullary portion, continuous with the medullae of adjacent lobules, and an outer cortical portion. It is supplied by the inferior thyroid and internal thoracic arteries, and its nerves are derived from the vagus and sympathetic nerves.
Synonym(s): thymus gland
[G. thymos, excrescence, sweetbread]
Farlex Partner Medical Dictionary © Farlex 2012

(thī′məs)
n. pl. thy·muses
A small glandular organ that is situated behind the top of the breastbone, consisting mainly of lymphatic tissue and serving as the site of T cell differentiation. The thymus increases gradually in size and activity until puberty, after which it begins to atrophy.
The American Heritage® Medical Dictionary Copyright © 2007, 2004 by Houghton Mifflin Company. Published by Houghton Mifflin Company. All rights reserved.

, pl. thymi, pl. thymuses (thī'mŭs, -mī, -mŭs-ĕz) [TA]
A primary lymphoid organ, located in the superior mediastinum and lower part of the neck, which is necessary in early life for the normal development of immunologic function. It reaches its greatest relative weight shortly after birth and its greatest absolute weight at puberty; it then begins to involute, and much of the lymphoid tissue is replaced by fat. The thymus consists of two irregularly shaped parts united by a connective tissue capsule. Each part is partially subdivided by connective tissue septa into lobules, which consist of an inner medullary portion, continuous with the medullae of adjacent lobules, and an outer cortical portion.
Synonym(s): thymus gland.
[G. thymos, excrescence, sweetbread]
Medical Dictionary for the Health Professions and Nursing © Farlex 2012 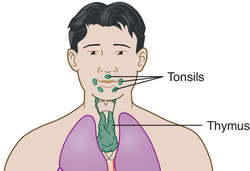 THYMUS
A primary lymphoid organ located in the mediastinal cavity anterior to and above the heart, where it lies over the superior vena cava, aortic arch, and trachea. The thymus comprises two fused lobes, the right larger than the left. The lobes are partially divided into lobules, each of which has an outer cortex packed with immature and developing T lymphocytes (thymocytes) and an inner medulla containing a looser arrangement of mature T lymphocytes. See: illustration

The thymus is the primary site for T-lymphocyte differentiation; here, T lymphocytes acquire their range of antigen receptors. During the prenatal period, lymphoid stem cells migrate from the bone marrow to the thymus, filling the cortex of the lobules. Developing thymocytes acquire their characteristic CD surface antigens and their binding receptors. As the thymocytes then move from the cortex into the medulla of the lobules, some are protected but many undergo cell death in a process that culls out those reactive to autoantigens. Less than 5 % of the thymocytes mature into T cells that pass out of the lobules and migrate to the spleen, lymph nodes, and other lymphoid tissue, where they control cell-mediated immune responses. The thymus produces at least four hormones: thymopoietin, thymulin, thymus humoral factor, and the thymosins.

At birth, the thymus weighs 10-15 g; by puberty, it weighs about 20 g. After this, the cortical regions of the thymus shrink and become replaced by adipose tissue, although the thymus continues to produce hormones and some thymocytes into old age.

Lack of a thymus or thymus hypoplasia is one component of DiGeorge syndrome, which is marked by severe lack of cell-mediated immunity; removal of the thymus of an adult is less catastrophic but leads to a less effective response to new antegens. Thymic hyperplasia results from the growth of lymph follicles containing both B lymphocytes and dendritic cells. It is found in myasthenia gravis and, occasionally, in other autoimmune diseases (e.g., Graves' disease, rheumatoid arthritis, and systemic lupus erythematosus). Thymomas involve only the thymic epithelial cells. Other tumors, including those associated with Hodgkin's disease and lymphomas, involve thymocytes.

A small flat organ of the lymphatic system situated immediately behind the breastbone, that is apparent in children but inconspicuous after puberty. The thymus processes primitive LYMPHOCYTES so that they differentiate into the T cells of the immune system. It also differentiates T cells into T1 and T2 classes, a process that is influenced by the early environment of the individual.
Collins Dictionary of Medicine © Robert M. Youngson 2004, 2005

an endocrine gland situated in the neck region of most vertebrates, but close to the heart in mammals. It produces LYMPHOCYTES which then move to lymph nodes. The thymus produces a hormone called thymosin which causes the lymphocytes to form ANTIBODY-producing plasma cells immediately after birth, but regresses in adult animals.
Collins Dictionary of Biology, 3rd ed. © W. G. Hale, V. A. Saunders, J. P. Margham 2005

An organ near the base of the neck that produces cells that fight infection. It is at its largest at puberty, then declines in size and function during adult life.
Mentioned in: Ataxia-Telangiectasia, Lymph Node Biopsy, Mediastinoscopy
Gale Encyclopedia of Medicine. Copyright 2008 The Gale Group, Inc. All rights reserved.

Feedback
Flashcards & Bookmarks ?
Please log in or register to use Flashcards and Bookmarks. You can also log in with
Flashcards ?
My bookmarks ?
+ Add current page to bookmarks
Mentioned in ?
References in periodicals archive ?
TECs were isolated from the thymi of neonatal mice after they were exposed to LPS for 24 h.
Alterations of Thymic Epithelial Cells in Lipopolysaccharide-induced Neonatal Thymus Involution
--The trapezoid muscles, thymi and testicles of groups 1-4 showed few or no signs of apoptosis.
An experimental multi-frequency system for studying dosimetry and acute effects on cell and nuclear morphology in rat tissues
(6.) Atkinson K, Storb R, Ochs HD et al, "Thymi Transplantation After Allogenic Bone Marrow Graft to Prevent Chronic Graft vs.
Experience in combating lymphopaenia in advanced cancer with human fetal thymus transplant