A liquid consisting of lipids, water, and mucin that coats the outer surface of the eye, lubricating it.

A reduction in the tear film causes a sensation of a dry or gritty eye, such as is seen in Sjögren's syndrome, keratoconjunctivitis, sicca, disorders of the lacrimal gland, and other conditions. Keeping eyelids clean, using artificial tears, and withholding medications that may reduce the tear film can prove helpful for some patients. Other treatments may include the wearing of moisture chambers around the eye, and eye lid surgery. Topical lubricants can be used for symptomatic relief. 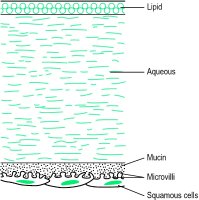