one of a number of flask-shaped cell nests located in the epithelium of vallate, fungiform, and foliate papillae of the tongue and also in the soft palate, epiglottis, and posterior wall of the pharynx; it consists of sustentacular, gustatory, and basal cells between which the intragemmal sensory nerve fibers terminate. There are five basic types of taste, each exemplified by the substance(s) in parenthesis after their types: bitter (quinine), salty (NaCl), sour (HCl), sweet (sugars and artificial sweeteners), and umami (glutamic acid).
Synonym(s): caliculus gustatorius, gustatory bud, organ of taste, Schwalbe corpuscle, taste bulb, taste corpuscle

n.
Any of numerous spherical or ovoid clusters of receptor cells found mainly in the epithelium of the tongue and constituting the end organs of the sense of taste.

(tāst bŭd)
One of a number of flask-shaped cell nests located in the epithelium of vallate, fungiform, and foliate papillae of the tongue and also in the soft palate, epiglottis, and posterior wall of the pharynx; it consists of sustentacular, gustatory, and basal cells between which the intragemmal sensory nerve fibers terminate.

One of the many spherical nests of cells containing specialized nerve endings distributed over the edges and base of the tongue. The taste buds respond to the crude flavours of substances dissolved in saliva. See also TASTE. 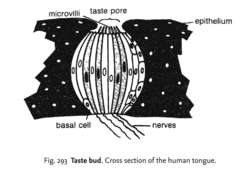 a receptor organ of taste that contains groups of slender modified epithelial cells with hair-like microvilli zwhich are clustered in a small external pore. Taste buds are associated with the mouth in vertebrates, but in fish they also occur over the body surface and on the fins. They are found on the tarsi of some insects (e.g. DIPTERANS). Humans distinguish between sweet, salt, sour and bitter tastes, using taste buds in different locations on the tongue, sweet on the front, sour on the sides, bitter on the back and salt all over. Taste depends on the relative activity of neurones that innervate the taste buds and not on any structural differences in the buds.

Feedback
Flashcards & Bookmarks ?
Please log in or register to use Flashcards and Bookmarks. You can also log in with
Flashcards ?
My bookmarks ?
+ Add current page to bookmarks
TheFreeDictionary presents:
Write what you mean clearly and correctly.
Mentioned in ?
References in periodicals archive ?
Half an hour before I arrived, I used Taste Bud to purchase $15 worth of food for $11.01, or 26.6 percent off, during one of the busiest times for a restaurant--the weekend dinner rush.
Mobile app brings dynamic pricing to the dinner table
Fewer taste buds leads to a lower signal strength to the brain, which ultimately means deficiencies in tasting.
Decoding Our Sense Of Taste
Taste buds can get altered either due to hormonal changes in the body or due to glitches in signals sent to the brain
WHEN YOUR favourite food JUST DOESN'T TASTE RIGHT
The objective of this study was to investigate whether taste buds are present on the human adult uvula.
Evidence that taste buds are not present on the human adult uvula. (Original Article)
In addition to taste buds, teeth are also present in the oropharyngeal cavities of many fishes.
Functional significance of the co-localization of taste buds and teeth in the pharyngeal jaws of the largemouth bass, Micropterus salmoides
The cave-dwelling fish do, however, have larger jaws, more teeth, and a greater number of taste buds than their sighted relatives do.
Did cavefish trade eyes for good taste?
But injecting that molecule directly into the tongues of lean mice resulted in faster die-off of taste bud cells, the researchers reported.
Study with mice finds obesity robs the tongue of taste buds
That's the number of taste buds your mouth contains, most of which are located on and around the tiny bumps on your tongue.
TASTE BUDS 10,000; INTERESTING NUMBERS
Differences were also seen in the shape of the taste buds and the extent to which they were connected to blood vessels, he said.
Smokers have poor taste
However, scientists believed that the density of taste buds on the tongue also played a part - a belief that goes back more than 20 years - and that taste bud density and supertasting could also explain food pickiness in some children who were more sensitive to bitter-tasting substances in spicy foods and in vegetables such as Brussels sprouts.
Bumpiness of tongue not linked to having more taste buds: Study
Adults have about 9,000 taste buds sensing sweet, salty, sour, bitter and umami flavors, or those corresponding to the flavor of glutamates.
Seniors' sense of smell and taste changes with age
Imagine working in a field that requires you not to smoke or take alcohol because your taste buds are your greatest tools of trade.That is the life Mr Chuaga Kinuthia has lived for nine years, honing his skills in coffee tasting, a job that does not attract many young Kenyans.
Teetotallers' haven in the fine art of coffee tasting teetotallers