1. an erythrocyte with a dark center surrounded by a light band that again is encircled by a darker ring; it thus resembles a shooting target; such cells appear in target-cell anemias or after splenectomy; Synonym(s): Mexican hat cell
2. a cell lysed by cytotoxic T lymphocytes, as in graft rejection.
Farlex Partner Medical Dictionary © Farlex 2012

n.
1. A cell selectively affected by a particular agent, such as a virus, drug, or hormone.
2. An abnormal red blood cell having a dark center surrounded by a light band that is itself encircled by a darker ring, seen in certain anemias and after splenectomy.
The American Heritage® Medical Dictionary Copyright © 2007, 2004 by Houghton Mifflin Company. Published by Houghton Mifflin Company. All rights reserved.
Cytology A term referring to the morphology of metaplastic endocervical cells seen in Pap smears, which contain Chlamydia trachomatis inclusions within vacuoles
Endocrinology A functional term referring to a cell (target cell) which responds to a hormone, factor or other substance
Haematology Codocyte, Mexican hat cell A term referring to the morphology of red cells which have an increased surface membrane to volume ratio and often an increased diameter. Target cells are characterised by a central haemoglobin-richer (relative to membrane) area surrounded by an area of pallor, which in turn is surrounded by a peripheral haemoglobin-richer zone. Target cells may be seen after splenectomy or acute blood loss, in liver disease and in iron deficiency; in these conditions, the MCV may be normal or increased. Target cells can also be associated with a relative decrease in haemoglobin—HbC, HbS—sickle cell anaemia, thalassaemia or combinations of haemoglobin diseases. Target cells are seen when there is a relative increase in the membrane itself as occurs in LCAT (lecithin-cholesterol acyl transferase) deficiency or in obstructive jaundice. Finally, target cells may be mere artifacts due to slow drying of smears in a humid environment or occur in smears made from specimens anticoagulated with excessive EDTA. Drying artifact is suggested by the presence of numerous target cells in some fields, but not in other fields
Target cells associated with HbC may have slightly reduced or normal MCV, whereas those associated with HbE disorders or HbH disease exhibit a varying degree of microcytosis
Immunology A functional term for MHC class I ‘restricted’ self cells which have undergone a viral, tumour-related or other transformation and present antigens to cytotoxic T cells
Pathology The finding in cells of intracytoplasmic—targetoid—vacuoles is suggestive of lobular carcinoma in situ; 2/3 of cells contain mucin
Segen's Medical Dictionary. © 2012 Farlex, Inc. All rights reserved.

(tahr'gĕt sel)
1. An erythrocyte in target cell anemia, with a dark center surrounded by a light band that again is encircled by a darker ring, thus resembling a target used in practice with firearms or archery; such cells also appear after splenectomy.
2. A cell lysed by cytotoxic T lymphocytes, as in graft rejection.
Synonym(s): codocyte, leptocyte, Mexican hat cell.
Medical Dictionary for the Health Professions and Nursing © Farlex 2012 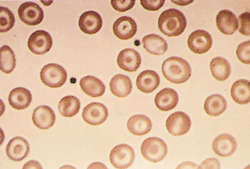 1. . An erythrocyte with a dark rounded central area surrounded by a lightly stained clear ring, which in turn is surrounded by a dense ring of peripheral cytoplasm. It is present in certain blood disorders, such as thalassemia, and in patients who have no spleen. See: hemoglobin C disease for illus Synonym: codocyte; leptocyte
2. . The cell at which a signal (e.g., hormone or nerve impulse) is aimed.
illustration
See also: cell
Medical Dictionary, © 2009 Farlex and Partners

(tahr'gĕt sel)
An erythrocyte in target cell anemia, with a dark center surrounded by a light band that again is encircled by a darker ring, thus resembling a target used in practice with firearms or archery; such cells also appear after splenectomy.
Synonym(s): leptocyte, Mexican hat cell.
Medical Dictionary for the Dental Professions © Farlex 2012

Feedback
Flashcards & Bookmarks ?
Please log in or register to use Flashcards and Bookmarks. You can also log in with
Flashcards ?
My bookmarks ?
+ Add current page to bookmarks
Mentioned in ?
References in periodicals archive ?
Thaw-and-use Fc[gamma]RIIIA-V158 variant effector cells and Raji target cells were purchased from Promega (Madiso n, WI).
A Novel System for the Quantification of the ADCC Activity of Therapeutic Antibodies
Effector and target cells were placed in 12 x 75-mm round bottom polystyrene tubes (Falcon, NJ, USA) to yield effector:target ratios of 50:1, 25:1, and 12.5:1.
Differences in lymphocyte subpopulation count and function in cord, maternal and adult blood / Kordon kani, maternal ve eriskin kanda sayisal ve fonksiyonel lenfosit alt grup farkliliklari
In this example, a thermostat, sending an electronic signal to a furnace, is analogous to an endocrine cell producing a hormone that evokes some physiologic effect in a target cell. In the case of the heating system, a drop in temperature is detected by the thermostat.
Chapter 7: Principles of reproductive endocrinology
In all experiments, the labeling of target cells with DiO allowed their discrimination from lobster cells based on their fluorescence in FL1.
Development of assays to evaluate cellular immune functions in the American lobster (Homarus americanus)
If scientists could introduce pure DNA into target cells and tissues without encasing it in a virus, a polymer, or other material, they would eliminate concerns about the toxicity of those substances.
Delivering the goods: gene therapy without the virus
Retroviruses are often used as viral vectors because they have the ability to integrate efficiently and permanently into the genome of actively dividing target cells. First, a retrovirus has its infection-causing genes deactivated so it will not cause disease in the individual.
Gene Therapy: Pharmaceutical Alteration of the Human Genome
Researchers speculate that if a patient's blood could be flooded with excess CD4 molecules, they might sop up most of the virus, leaving the natural target cells unharmed.
Curing disease through human gene therapy
"Essentially, they mirror how the stem cells respond to an inflammatory environment like that seen during complex neural injuries and diseases, and they pass this ability on to the target cells," Pluchin said.
How stem cells repair damage
With that pore in place, proteases known as granzymes can enter target cells and destroy them.
Study unearths well-kept secret of our immune system's success
You can see the various target cell results for this scenario.
Add even more muscle to "what-if" analyses: team Scenario Manager with Scenario PivotTable for a more powerful tool
GlycoMAb is a fully developed technology platform that efficiently increases the specific biological activity of therapeutic monoclonal antibodies for target cell ablation.
ROCHE/GLYCART TO DISCOVER NEW THERAPEUTIC ANTIBODIES
Scientists used three-dimensional microscopy in real-time to visualize the subcellular localization of components of NK cells during the in vitro killing of tumor target cells. By learning that cellular organization has to go through a defined series of steps to eliminate a target cell, researchers now can study how these units function.
NK and T cells team to tackle cancer