[bur´sah] (pl. bur´sae) (L.)
a small fluid-filled sac or saclike cavity situated in places in tissues where friction would otherwise occur. adj., adj bur´sal. Bursae function to facilitate the gliding of muscles or tendons over bony or ligamentous surfaces. They are numerous and are found throughout the body; the most important are located at the shoulder, elbow, knee, and hip. Inflammation of a bursa is known as bursitis.
bursa of Fabricius an epithelial outgrowth of the cloaca in chick embryos, which develops in a manner similar to that of the thymus in mammals, atrophying after 5 or 6 months and persisting as a fibrous remnant in sexually mature birds. It contains lymphoid follicles, and before involution is a site of formation of B-lymphocytes associated with humoral immunity.
bursa muco´sa (mucous bursa) (synovial bursa) a closed synovial sac interposed between surfaces that glide upon each other; it may be subcutaneous, submuscular, subfascial, or subtendinous in location.
subacromial bursa one between the acromion and the insertion of the supraspinatus muscle, extending between the deltoid and the greater tubercle of the humerus. See illustration. 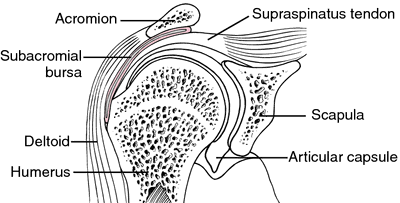 Subacromial bursa, lying between the acromion and supraspinatus tendon and extending between the deltoid and greater tubercle. From Dorland's, 2000.
Miller-Keane Encyclopedia and Dictionary of Medicine, Nursing, and Allied Health, Seventh Edition. © 2003 by Saunders, an imprint of Elsevier, Inc. All rights reserved.

(si-nō'vē-ăl bŭr'să) [TA]
A sac containing synovial fluid that occurs at sites of friction, as between a tendon and a bone over which it plays, or subcutaneously over a bony prominence.
Medical Dictionary for the Health Professions and Nursing © Farlex 2012