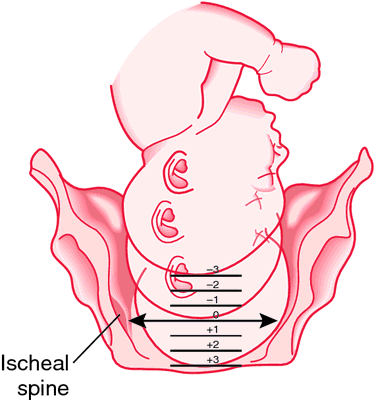 Station of the fetus. From McKinney et al. 2000.
Miller-Keane Encyclopedia and Dictionary of Medicine, Nursing, and Allied Health, Seventh Edition. © 2003 by Saunders, an imprint of Elsevier, Inc. All rights reserved.

Feedback
Flashcards & Bookmarks ?
Please log in or register to use Flashcards and Bookmarks. You can also log in with
Flashcards ?
My bookmarks ?
+ Add current page to bookmarks
Mentioned in ?
References in classic literature ?
He came up with long strides of his skeleton legs, swinging a staff as tall as himself, and, entering the common room of the station, would squat on his heels to the left of the door.
Then, one morning, as Kayerts and Carlier, lounging in their chairs under the verandah, talked about the approaching visit of the steamer, a knot of armed men came out of the forest and advanced towards the station. They were strangers to that part of the country.
View in context
"Next day I left that station at last, with a caravan of sixty men, for a two-hundred-mile tramp.
On the fifteenth day I came in sight of the big river again, and hobbled into the Central Station. It was on a back water surrounded by scrub and forest, with a pretty border of smelly mud on one side, and on the three others inclosed by a crazy fence of rushes.
View in context
These considerations, and the influence of personal confidences and attachments, would be likely to induce every new President to promote a change of men to fill the subordinate stations; and these causes together could not fail to occasion a disgraceful and ruinous mutability in the administration of the government.
A fourth ill effect of the exclusion would be the banishing men from stations in which, in certain emergencies of the state, their presence might be of the greatest moment to the public interest or safety.
View in context
Instead of taking the way which led to the station, the chaise pursued the westward road to the market-town.
And so, by a hair's-breadth, did she escape the treble risk of discovery which threatened her--from Geoffrey, on his way back; from Arnold, at his post; and from the valet, on the watch for her appearance at the station.
View in context
The wind was in their faces down the station road, blowing the dust into Mrs.
He sounded as if he was talking to a porter, and, certain that he had deceived her at the station, she too grew angry.
View in context
"Let me walk back to the station with you tonight."
View in context
The evening come, she put on her bonnet and shawl, and went quietly out: having her reasons for hovering in a furtive way about the station by which a passenger would arrive from Yorkshire, and for preferring to peep into it round pillars and corners, and out of ladies' waiting-room windows, to appearing in its precincts openly.
View in context