(staf'i-lō-kok'ăl),
Relating to or caused by any organism of the genus Staphylococcus.
Farlex Partner Medical Dictionary © Farlex 2012

(staf'i-lō-kok'ăl)
Relating to or caused by any organism of the genus Staphylococcus.
Medical Dictionary for the Health Professions and Nursing © Farlex 2012 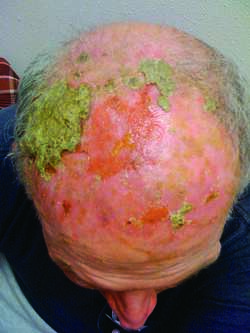 A.
MRSA - Methicillin-Resistant Staphylococcus Aureus, is a nick name for a specific subtype of bacteria from the Staph bacteria family, which is found resistant to many of the common antibiotics that are in use today. This is due to a mutation development in the Staph bacteria, which allowed it to grow resistance against the killing ingredient in common antibiotics, therefore making it a harder infection to treat and cure. Hospitals keep track of their MRSA infections for epidemiological reasons, in order to get a perspective on bacterial resistance to antibiotics, hoping new and more effective antibiotic medication will be researched.
More discussions about staphylococcal
This content is provided by iMedix and is subject to iMedix Terms. The Questions and Answers are not endorsed or recommended and are made available by patients, not doctors.