[ko´lon]
the part of the large intestine extending from the cecum to the rectum; it is divided as follows: the ascending colon passes upward from the cecum to the lower edge of the liver, where it bends and becomes the transverse colon; the transverse colon crosses the abdominal cavity from right to left below the stomach and then bends downward to become the descending colon; the descending colon then extends downward along the left side of the abdomen, and at the brim of the pelvis it becomes the sigmoid colon, an S-shaped curve leading down to the sacrum where it becomes the rectum. See also digestive system and see color plates. adj., adj colon´ic.
irritable colon (nervous colon) (spastic colon) terms formerly used for irritable bowel syndrome.
Miller-Keane Encyclopedia and Dictionary of Medicine, Nursing, and Allied Health, Seventh Edition. © 2003 by Saunders, an imprint of Elsevier, Inc. All rights reserved.

(kō'lon), [TA] In medical dictation, the phrase colon mark is customarily used to identify the punctuation mark (:) when there is any possibility of confusion with the anatomic word.
The large intestine extending from the cecum to the rectum.
[G. kolon]
Farlex Partner Medical Dictionary © Farlex 2012

An elevated 'tumor' mass, which is usually epithelial, and often neoplastic; polyps are common in the colon, ♀ genital tract, nasopharynx, stomach See Bladder polyp, Cervical polyp, Colon polyp, Hairy polyp, Inflammatory polyp, Inflammatory fibroid polyp, Juvenile polyp, Pseudopolyp, Retention polyp.
Polyps
Colon Colonic polyps are usually epithelial, and are acquired or hereditary
Acquired polyps Adenomatous (tubular or villous) in morphology, ↑ frequency with age; although often asymptomatic, larger polyps are often announced by bleeding, or changed bowel habits; if really large, APs may form a leading 'front' of an intussusception; distinction between adenomatous polyps ('tight' round glands) and villous adenomas (finger-like fronds of elongated glands) has little practical importance–both have malignant potential; periodic colonoscopy and polypectomy yields a 3-fold ↓ in subsequent cancer; hyperplastic polyps are also acquired but are non-neoplastic
Hereditary polyps are epithelial and may overlap with each other
• Familial adenomatous polyposis (FAP) A premalignant, AD MIM 175100 condition presenting in early adulthood with 100s to 1000s of colonic polyps, related to a loss of the normal repression of DNA synthesis in the entire colonic epithelium; adenocarcinoma occurs in 70–100% of Pts, prevented by prophylactic colectomy
• Gardner syndrome A rare AD MIM 175100 condition with premalignant polyps of the entire GI tract, which is identical to FAP, but has, in addition, extraintestinal tumors; most Pts develop colon carcinoma; other neoplasms in GS Pts include bile duct carcinoma, osteomas of the mandible, skull, and long bones, soft tissue tumors (fibromas, lipomas), sebaceous cysts, and rarely, thyroid and adrenal gland cancers
• Turcott syndrome A rare AR MIM 276300 condition associated with brain tumors, eg medulloblastoma, glioblastoma
• Other colon polyps Hamartomas, hyperplastic polyps, juvenile and retention polyps–little neoplastic potential
• Turcott syndrome A non-hereditary condition characterized by diffuse GI polyposis, accompanied by alopecia, nail atrophy, cutaneous hyperpigmentation, weight loss, protein-losing enteropathy, electrolyte imbalance and malnutrition
• Peutz-Jeghers syndrome An AD MIM 175200 condition with hamartomas of the entire GI tract, predominantly of the small intestine, focal Paneth cell hyperplasia, melanin spots in buccal mucosa, lips, and digits, intussusception and bleeding; colonic adenocarcinomas, when seen in PJS, arise in adenomatous and not in hamartomatous polyps; PJS may be associated with Sertoli cell tumor with annular tubules, see SCTAT.
Female urogenital tract Endometrial and endocervical polyps are circumscribed foci of cystic glandular hyperplasia of the mucosa and may cause abnormal bleeding; carcinoma arising in such polyps is rare; when smooth muscle is also present, they are designated as adenomatous polyps DiffDx Polypoid smooth muscle tumors, benign and malignant. See Müllerian mixed tumor.
Nasopharynx Nasal polyps Inflammatory ('allergic') polyps of the nasal cavity are not neoplastic, but rather reactive to inflammation or allergy; unlike true polyps, nasal polyps display edema and chronic inflammation (eosinophils, plasma cells, and lymphocytes), are bilateral, recurrent, and intranasal
Skin Squamous polyps and fibroepithelial polyps or 'skin tags' are benign prolapses of upper dermis onto the skin surface, which have no neoplastic potential
Stomach polyp Gastric polyp It is often (incorrectly) assumed that colon polyps are analogous to gastric polyps; hyperplastic polyps (type I and II polyps by Japanese authors) comprise 75% of all gastric polyps; they are neoplastic, but are usually benign

(kō'lŏn) [TA]
The division of the large intestine extending from the cecum to the rectum.
[G. kolon]
Medical Dictionary for the Health Professions and Nursing © Farlex 2012 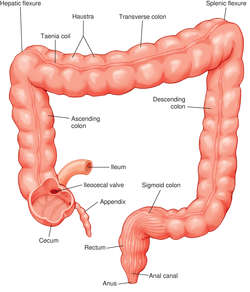 COLON AND RECTUM: Normal colon, seen endoscopically
The large intestine from the end of the ileum to the anal canal that surrounds the anus, about 59 in (1.5 m) long; divided into the ascending, the transverse, the descending, and the sigmoid or pelvic colon. Beginning at the cecum, the first part of the large intestine (ascending colon) passes upward to the right colic or hepatic flexure, where it turns as the transverse colon passing ventral to the liver and stomach. On reaching the spleen, it turns downward (left colic or splenic flexure) and continues as the descending colon to the brim of the pelvis, where it is continuous with the sigmoid colon and extends to the rectum. See: illustration

Mechanical: The colon mixes the intestinal contents. Chemical: The colon does not secrete digestive enzymes. The products of bacterial action that are absorbed into the bloodstream are carried by the portal circulation to the liver before they enter the general circulation. More water is absorbed in the colon than in the small intestine. In this way, body fluids are conserved, and despite the large volumes of secretions added to the food during its progress through the alimentary canal, the contents of the colon are gradually dehydrated until they assume the consistency of normal feces or even become quite hard. See: absorption, colon; defecation

Bacteria of the colon

The normal microbial flora in the colon, some of which may produce vitamins, esp. vitamin K; metabolize proteins and sugars; produce organic acids and ammonia; and deconjugate bile acids. Several conditions, such as use of antibiotics, corticosteroids, or dieting, may alter the normal flora. Although Escherichia coli is the most widely known bacterium that inhabits the colon, it is not the most common, being outnumbered by anaerobic Bacteroides species by a very wide margin.

The part of the colon that turns medially at the left iliac crest, between the descending colon and the rectum; shaped like the letter S.

The large intestine. It is called ‘large’ because of its diameter. Its main function is to conserve water by absorption from the bowel contents. It also promotes the growth of bacteria which synthesize vitamins.
Collins Dictionary of Medicine © Robert M. Youngson 2004, 2005

a part of the large intestine of mammals, consisting of a wide tube with folded walls between the ILEUM of the small intestine and the RECTUM. The main function of the colon is the reabsorption of water from the FAECES.
Collins Dictionary of Biology, 3rd ed. © W. G. Hale, V. A. Saunders, J. P. Margham 2005

The part of the large intestine that extends from the cecum to the rectum. The sigmoid colon is the area of the intestine just above the rectum; linking the descending colon with the rectum. It is shaped like the letter S.
Mentioned in: Hemorrhoids, Laxatives, Rectal Polyps
Gale Encyclopedia of Medicine. Copyright 2008 The Gale Group, Inc. All rights reserved.

(kō'lŏn) [TA]
Large intestine extending from the cecum to the rectum.
[G. kolon]
Medical Dictionary for the Dental Professions © Farlex 2012

Q. How is colon cancer diagnosed?

A. thank you lamsophie, great answer...

A. colon removal is a treatment for various situation, usually a last resort treatment...when anything else just wouldn't or couldn't work.
it's "success" as a treatment depends on the cause. i can tell you that this is the area that absorbs B12 and bile and most of the water, so expect a shortage of that three. in the water and bile case- expect watery stool...
sorry all that doesn't seem such a nice state but when Dr. come to the point they have to do it- there must be a good enough reason.

Q. Is colon cancer hereditary? My uncle died of colon cancer and as I've been having some unexplained problems these days- of vomiting etc I'm really afraid I may have it as well. Is it hereditary? What are the first symptoms?

A. Thank you Bianca for your answers! helped a lot...this is a great site!
More discussions about colon
This content is provided by iMedix and is subject to iMedix Terms. The Questions and Answers are not endorsed or recommended and are made available by patients, not doctors.