[spi´nal]
1. pertaining to a spine.
2. pertaining to the vertebral column.
spinal cord that part of the central nervous system lodged in the spinal canal, extending from the foramen magnum to the upper part of the lumbar region. It is composed of an inner core of gray substance in which nerve cells predominate and an outer layer of white substance in which myelinated nerve fibers predominate. Called also medulla spinalis. (See Plates and see accompanying figures.) 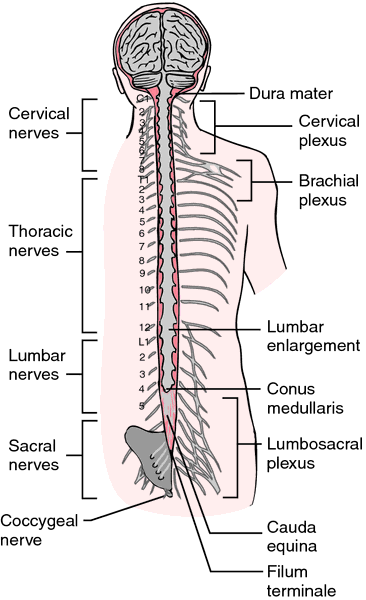 Gross anatomy of the spinal cord. From Applegate, 2000. 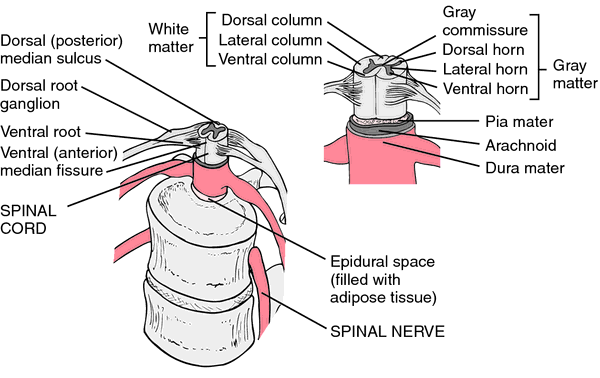 Cross section of the spinal cord. From Applegate, 2000.
Miller-Keane Encyclopedia and Dictionary of Medicine, Nursing, and Allied Health, Seventh Edition. © 2003 by Saunders, an imprint of Elsevier, Inc. All rights reserved.

(spī′nəl)
adj.
1. Of, relating to, or situated near the spine or spinal cord; vertebral: spinal injury.
2. Resembling a spine or spinous part.
n.
An anesthetic injected into the spinal cord to induce partial or complete anesthesia.
spi′nal·ly adv.
The American Heritage® Medical Dictionary Copyright © 2007, 2004 by Houghton Mifflin Company. Published by Houghton Mifflin Company. All rights reserved.

Feedback
Flashcards & Bookmarks ?
Please log in or register to use Flashcards and Bookmarks. You can also log in with
Flashcards ?
My bookmarks ?
+ Add current page to bookmarks
Mentioned in ?
References in classic literature ?
"Sati," Van Horn read, his finger marking the place, his eyes alternating watchfully between the writing and the black chief before him, while the black chief himself speculated and studied the chance of getting behind him and, with the single knife-thrust he knew so well, of severing the other's spinal cord at the base of the neck.
View in context
And Bassett, raising his hand in signal, bending forward his head as agreed so as to expose cleanly the articulation to his taut spinal cord, forgot Balatta, who was merely a woman, a woman merely and only and undesired.
View in context
It was admirable to see with what dexterity St Jago dodged behind the beast, till at last he contrived t give the fatal touch to the main tendon of the hind le after which, without much difficulty, he drove his knif into the head of the spinal marrow, and the cow droppe as if struck by lightning.
View in context
A TEESSIDE spinal support group, which helps hundreds of people with chronic back pain in the local area and beyond has been praised in Parliament.
Sedgefield MP Phil Wilson held a Commons debate about the work of the Tees Valley Spinal Support Group - based at the University Hospital of North Tees, Stockton.
As well as supporting others, they have helped form an all-party Parliamentary group to promote awareness of the limited availability of specialist spinal surgeons and improve care for back pain sufferers and those with spinal injuries.
Last week, the MP for Sedgefield praised their work, saying: "At a time of controversial change to the NHS, I wanted to put on record my belief that the spinal unit at the University Hospital of North Tees and the volunteer network that supports patients before and after treatment is a shining illustration of all that is good about the NHS, and should be an example of how other acute care and chronic pain services should operate elsewhere." The North Tees spinal unit's consultants see about 2,000 new patients a year from both in and out of the area.
SPINAL SUPPORT GROUP PRAISED IN PARLIAMENT