[smel]
the sense that enables one to perceive odors; it depends on the stimulation of sense organs in the nose by small particles carried in inhaled air. It is important not only for the detection of odors, but also for the enjoyment of food, since flavor is a blend of taste and smell. Taste registers only four qualities: salt, sour, bitter, and sweet; other qualities of flavor depend on smell. Called also olfaction.

The organs of smell are small patches of special cells (olfactory cells) in the nasal mucosa. One patch is located in each of the two main compartments of the back of the nose. The olfactory cells are connected to the brain by the first cranial nerve (olfactory nerve). Air currents do not flow directly over the patches in breathing; this is why one must sniff to detect a faint odor or to enjoy a fragrance to the fullest.

When one sniffs, air currents carrying molecules of odorous chemicals enter special compartments, called olfactory chambers, where the chemicals are dissolved in mucus. There they can act on the organs of smell in much the same way that solutions act on the taste buds of the tongue. The endings of the sensory nerves that detect odors, the olfactory receptors, can quickly adapt to an odor and cease to be stimulated by it after a few minutes of full exposure.

The sense of smell may be diminished or lost entirely, usually temporarily, as a result of an obstruction of the nose, nasal infection, injury or deterioration of the nasal tissue, brain tumor, or mental illness. In rare instances, injury or disease causes such damage to the olfactory nerve that loss of the sense of smell is permanent. Complete absence of the sense of smell is known as anosmia.
Miller-Keane Encyclopedia and Dictionary of Medicine, Nursing, and Allied Health, Seventh Edition. © 2003 by Saunders, an imprint of Elsevier, Inc. All rights reserved.

(smel),
To scent; to perceive an odor by means of the olfactory apparatus.
Farlex Partner Medical Dictionary © Farlex 2012

(smĕl)
n.
a. The sense, located in the nasal cavities of mammals and relying on the olfactory nerves, by which molecules borne in a fluid such as air can be perceived; the olfactory sense.
b. A similar sense in other animals, as insects' ability to perceive air-borne molecules with their antennae.
v. smelled or smelt (smĕlt), smelling, smells
v.tr.
a. To perceive (an odor) by the sense of smell.
b. To perceive or detect (something) by a chemosensory organ, such as an antenna.
v.intr.
To use the sense of smell.
The American Heritage® Medical Dictionary Copyright © 2007, 2004 by Houghton Mifflin Company. Published by Houghton Mifflin Company. All rights reserved.
noun Popularly, an odour or scent
verb To perceive odour or scent via the olfactory nerve
Segen's Medical Dictionary. © 2012 Farlex, Inc. All rights reserved.

(smel)
1. To scent; to perceive by means of the olfactory apparatus.
2. Synonym(s): olfaction (1) .
3. Synonym(s): odor.
Medical Dictionary for the Health Professions and Nursing © Farlex 2012 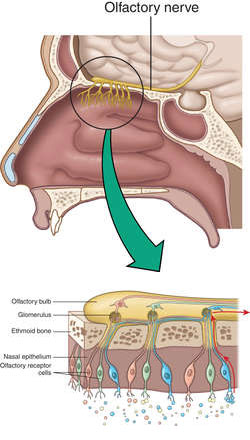 SENSE OF SMELL
1. To perceive by stimulation of the olfactory nerves. The sense of smell is a chemical sense dependent on sensory cells on the surface of the upper part of the nasal septum and the superior nasal concha. These sensory cells live for an average of 30 days and are affected by a variety of factors, including age, nutritional and hormonal states, drugs, and therapeutic radiation. Synonym: olfactory perception See: illustration
2. The property of something affecting the olfactory organs. In clinical medicine, the smell arising from the patient's body, feces, breath, urine, vagina, or clothing may provide information concerning diagnosis. The smell on a patient's clothing, for example, may be due to a toxic chemical that spilled on the clothes. A patient may attempt to alter or mask the smell of alcohol on the breath by using medicated or flavored lozenges, mouthwashes, sprays, or mints. Even though our sense of smell is relatively weak compared with that of some animals, humans have the capacity to distinguish among as many as 10,000 different odors. The inhaled substance must be volatile (i.e., capable of diffusing in air) for us to perceive it, and the volatile chemical must also be soluble in water. See: odor

Abnormalities in the sense of smell include: Anosmia: A loss of the sense of smell. It may be a local and temporary condition resulting from acute and chronic rhinitis, mouth breathing, nasal polyps, dryness of the nasal mucous membrane, pollens, or very offensive odors. It may also result from disease or injury of the olfactory tract, bone disease near the olfactory nerve, disease of the nasal accessory sinuses, meningitis, or tumors or syphilis affecting the olfactory nerve. It may rarely represent a conversion disorder. Disease of one cranial hemisphere or of one nasal chamber may also account for anosmia. Synonym: anodmia; anosphrasia

Hyperosmia: An increased sensitivity to odors.

Kakosmia: The perception of bad odors where none exist; it may be due to head injuries or occur in hallucinations or certain psychoses. Synonym: cacosmia

Parosmia: A perverted sense of smell. Odors that are considered agreeable by others are perceived as being offensive, and disagreeable odors are found pleasant. Synonym: parosphresia

One of the five senses. Smell is mediated by airborne chemical particles that dissolve in the layer of mucus on the upper part of the nose lining and stimulate the endings of the olfactory nerve twigs. The olfactory system is capable of distinguishing a large number of distinct odours.
Collins Dictionary of Medicine © Robert M. Youngson 2004, 2005

(smel)
1. To scent; to perceive an odor by means of the olfactory apparatus.
2. Synonym(s): odor.
Medical Dictionary for the Dental Professions © Farlex 2012

Q. I have a very acute sense of smell. Most things that have a smell cause me to have Migraines every day. I have heard that a chiropractor is who I need to treat me for this problem. Anyone else here have this problem? What have you done and were you able to treat it?

A. I can't remember where I heard about the chiropractor's involvement but it is really unpleasant. I tend to make life unpleasant for others to, just not to have a migraine. Things like cooking popcorn, perfumes, trash and many other things will give me a migraine (not a headache) right away. It may be called Hyperosmia (abnormal sense of smell).

Q. MY friends body is leaking and he smells awful. He also has a skin rash. He stinks.Can I help him.He is big. smokes too much,and does shower but he still smells. I need to get him in a chairty hospital. If ignored what will happened. Thank You Bettye

A. HI betty,thank god he has a friend like you--I dont like saying this but,your friend is killing himself,and the sooner you try to get him into a hospital the better--it not going to be easy-but you can only try.At this point he is at risk of LUNG CANCER--A VERY BAD INFECTION--AND CARDIAC ARREST,because of his weight,eating is an addiction,and people die from it,also people die from respiratory arrest because of his weight--stay strong--mrfoot56
More discussions about smell
This content is provided by iMedix and is subject to iMedix Terms. The Questions and Answers are not endorsed or recommended and are made available by patients, not doctors.

Feedback
Flashcards & Bookmarks ?
Please log in or register to use Flashcards and Bookmarks. You can also log in with
Flashcards ?
My bookmarks ?
+ Add current page to bookmarks
Mentioned in ?
References in periodicals archive ?
(It was also mentioned as decreasing men' s accuracy and thus contributing to smelliness!)
Dirty spaces: communication and contamination in men's public toilets (1)
It's clear from the many men who are prepared to have sex still wearing their smelly socks, that fastidiousness isn't very high up their list of priorities as a prelude to sex, and they can't see what all the fuss is about when their smelliness is pointed out to them.
DR MIRIAM: Husband's stink turns me off
Just to say we all wish you well and are missing your smelliness! Come home soon for a good drink up.
War in the Gulf: MESSAGES TO OUR BOYS; Don't scare Saddam too much with your driving
This cleans out the 2,500 sweat glands in each foot and helps to stop any smelliness.
Beauty Zone Caprice's secrets: Q & A