Astigmatism along one meridian only.
See also: astigmatism 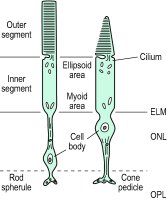