[shōl´der]
the area around the glenohumeral joint, the large ball-and-socket joint where the humerus joins the scapula. The smooth, rounded head of the humerus rests against the socket in the scapula. The joint is covered by a tough, flexible protective capsule and is heavily reinforced by ligaments that stretch across the joint. The ends of the bones where they meet at the joint are covered with a layer of cartilage that reduces friction and absorbs shock. A thin membrane, the synovial membrane, lines the socket and lubricates the joint with synovia. Further cushioning and lubrication are provided by fluid-filled sacs called bursae. Disorders of the shoulder include bursitis and dislocation. 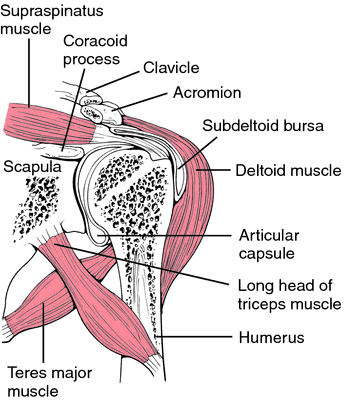 (shōl'dĕr),
1. The lateral portion of the scapular region, where the scapula joins with the clavicle and humerus and is covered by the rounded mass of the deltoid muscle.
2. In dentistry, the ledge formed by the junction of the gingival and axial walls in extracoronal restorative preparations.
[A.S. sculder]

(shōl′dər)
n.
1.
a. The joint connecting the arm with the torso.
b. The part of the human body between the neck and upper arm.
2.
a. The joint of a vertebrate animal that connects the forelimb to the trunk.
b. The part of an animal near this joint.
3. often shoulders The area of the back from one shoulder to the other.
v. shoul·dered, shoul·dering, shoul·ders

A descriptive term for the gently sloped acceleration rhythm seen on a paper printout of the foetal heart monitor that either precedes or follows a typical deceleration, in contrast to the usual “acceleration” (a short increase in foetal heart rate above baseline) that occurs in response to foetal movement.

Obstetrics A descriptor for the gently-sloped acceleration rhythm seen on a paper printout of the fetal heart monitor that either precedes or follows a typical deceleration, in contrast to the usual 'acceleration'–a short-term ↑ in heart rate above baseline occurring in response to fetal movement. See Deceleration, Fetal heart monitor.

(shōl'dĕr)
1. The lateral portion of the scapular region, where the scapula joins with the clavicle and humerus and is covered by the rounded mass of the deltoid muscle.
2. Shoulder joint.
3. dentistry The ledge formed by the junction of the gingival and axial walls in extracoronal restorative preparations.
[A.S. sculder] 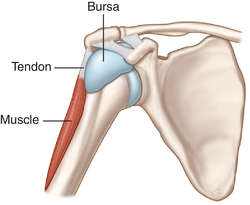 SHOULDER
A part of the shoulder girdle complex, comprising the region of the proximal humerus, clavicle, and scapula. See: scapula; illustration

(shōl'dĕr)
1. In dentistry, any step formed by junction of gingival and axial walls in extracoronal restorative preparations.
2. Lateral portion of scapular region, where scapula joins with clavicle and humerus and is covered by rounded mass of the deltoid muscle.
[A.S. sculder]

Q. how can i solve my back and shoulder problems? also how can i get raid of my eye bugs?

A. krando,
many thanks i will try those tips you just give me...wish you a wonderful and safe and sound newly year...

Q. shoulder and neck strain and pain I have a terrible shoulder and neck pain and i keep cracking my neck muscles to release pressure. I get temporary relief with tylenol but after few hrs the pain and strain starts again.Any ideas?

A. A mellow exercise and streching on a regular basis is the best way to release a sore back and muscles in general, including your neck. You should try that plus applying local warm temperature (for example a warm pillow)around your neck. If that doesn't work then other anti-inflammatory drugs that you either apply as a cream or take as a pill can help you.

Q. How do I gain range of motion after shoulder surgery I'm 31 years old and had a shoulder replacment last year. I still don't know why my joint gave out and 4 Orthopedic Surgeons couldn't tell me either. I have limited Range of Motion and the Dr. seems to think that because of my "age" I was less likley to get full range back. I refuse to believe that, does anyone have any suggestions on how to gain ROM back?

A. i guess you go to physiotherapy no?
that is their job. to give you range of motion after injuries, surgeries ect. they'll give you exercises specially for your condition. when i had an accident i broke my leg hip and i needed 2 months of physiotherapy that helped very much.
More discussions about shoulder

Feedback
Flashcards & Bookmarks ?
Please log in or register to use Flashcards and Bookmarks. You can also log in with
Flashcards ?
My bookmarks ?
+ Add current page to bookmarks
TheFreeDictionary presents:
Write what you mean clearly and correctly.
Mentioned in ?
References in classic literature ?
Drummle, my shoulders squared and my back to the fire.
A man in a dustcoloured dress appeared with what was wanted - I could not have said from where: whether from the inn yard, or the street, or where not - and as Drummle leaned down from the saddle and lighted his cigar and laughed, with a jerk of his head towards the coffee-room windows, the slouching shoulders and ragged hair of this man, whose back was towards me, reminded me of Orlick.
View in context
They turned their shoulders to her most savage slashes, and with wagging tails and mincing steps strove to placate her wrath.
Then it was that his lips half writhed into a snarl, and the hair of his neck and shoulders involuntarily bristled, while he half crouched for a spring, his claws spasmodically clutching into the snow-surface for firmer footing.
View in context
The young Lord Greystoke was indeed a strange and war-like figure, his mass of black hair falling to his shoulders behind and cut with his hunting knife to a rude bang upon his forehead, that it might not fall before his eyes.
With the noble poise of his handsome head upon those broad shoulders, and the fire of life and intelligence in those fine, clear eyes, he might readily have typified some demigod of a wild and warlike bygone people of his ancient forest.
View in context
Then Buck sprang in and out; but while he was in, shoulder had at last squarely met shoulder.
View in context
"Dear son of Capaneus," said he, "come down from your chariot, and draw the arrow out of my shoulder."
View in context
Then, jumping out of the buggy, he gripped her shoulders with his strong hands.
View in context
Borckman came and stood by Van Horn's shoulder, and both men, strung to their tones in the tenseness of apprehension, strove to penetrate the surrounding blackness with their eyes, while they listened with all their ears for any message of the elements from sea and air.
View in context
It is the spirit that stoopeth the shoulders, I ween, and not the weight; for armor is heavy, yet it is a proud burden, and a man standeth straight in it......Nay, but me no buts, offer me no objections.
View in context
"How lovely!" said everyone who saw her; and the vicomte lifted his shoulders and dropped his eyes as if startled by something extraordinary when she took her seat opposite and beamed upon him also with her unchanging smile.
View in context