[skle´rah] (L.)
the tough, white outer coat of the eyeball, covering approximately the posterior five-sixths of its surface, continuous anteriorly with the cornea and posteriorly with the external sheath of the optic nerve. adj., adj scle´ral. 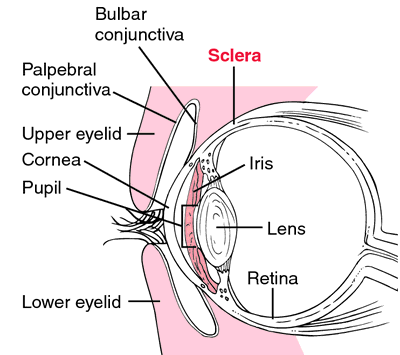 The sclera and other eye structures. From Lammon et al., 1995.
blue sclera abnormal blueness of the sclera; it is a prominent feature of osteogenesis imperfecta and is also seen in certain other conditions. (See Atlas 1, Part B.)
Miller-Keane Encyclopedia and Dictionary of Medicine, Nursing, and Allied Health, Seventh Edition. © 2003 by Saunders, an imprint of Elsevier, Inc. All rights reserved.

, pl. scleras, pl. sclerae (skleră, -ăz, -ē) [TA]
A portion of the fibrous tunic forming the outer envelope of the eye, except for its anterior one sixth, which is the cornea.
Synonym(s): sclerotica.
[Mod. L. fr. G. sklēros, hard]
Medical Dictionary for the Health Professions and Nursing © Farlex 2012

the outer coat of the vertebrate eye to which are attached extrinsic muscles for moving the eyeball. The sclera is lined by a vascular layer, the CHOROID, except for the forward-facing part which is called the CORNEA and is transparent, with no underlying choroid.
Collins Dictionary of Biology, 3rd ed. © W. G. Hale, V. A. Saunders, J. P. Margham 2005

The tough, white, opaque, fibrous outer tunic of the eyeball covering most of its surface (the cornea contributes 7% of, and completes, the outer tunic). Its anterior portion is visible and constitutes the 'white' of the eye. In childhood (or in pathological conditions) when the sclera is thin, it appears bluish, while in old age it may become yellowish, due to a deposition of fat. The sclera is thickest posteriorly (about 1 mm) and gradually becomes thinner towards the front of the eyeball. It is a sieve-like membrane at the lamina cribrosa. The sclera is pierced by three sets of apertures: (1) the posterior apertures round the optic nerve and through which pass the long and short posterior ciliary vessels and nerves; (2) the middle apertures, 4 mm behind the equator which give exit to the vortex veins; and (3) the anterior apertures through which pass the anterior ciliary vessels. The tendons of insertion of the extraocular muscles run into the sclera as parallel fibres and then spread out in a fan-shaped manner. The sclera is commonly considered to be divided into three layers from without inward: (1) the episclera, (2) the scleral stroma and (3) the suprachoroid (lamina fusca) which is interposed between choroid and sclera. Syn. sclerotic. Note: some authors consider the suprachoroid as belonging to the choroid. However, when choroid and sclera are separated part of the suprachoroid adheres to the choroid and part to the sclera. See cribriform plate; evisceration.
blue sclera A hereditary defect in which the sclera has a bluish appearance. The sclera is thinner than normal and is susceptible to rupture if the person engages in contact sports. It is often associated with fragility of the bones and deafness as part of a condition called osteogenesis imperfecta (fragilitas ossium, van der Hoeve's syndrome), with keratoconus or with acquired scleral thinning (e. g. necrotizing scleritis). Syn. blue sclerotic (Fig. S3). See Ehlers-Danlos syndrome; Marfan's syndrome.

Q. My 11 y/o son eyes appear to have a slight yellow in the whites toward the corners. I am assuming he will need blood work, but does anyone have any idea what may be the cause?

A. If it's not a spot, but rather a diffuse color, it may be jaundice - high levels in the blood of a substance called bilirubin (http://en.wikipedia.org/wiki/Jaundice).

If your child is generally healthy, and this change appeared without any overt problem (e.g. liver disease or blood problem), or your child had fever or fasted recently, this jaundice may represents Gilbert syndrome. It's a syndrome of slightly elevated levels of bilirubin, and considered not dangerous.

You may read more here:http://www.nlm.nih.gov/medlineplus/ency/article/000301.htm
More discussions about sclera
This content is provided by iMedix and is subject to iMedix Terms. The Questions and Answers are not endorsed or recommended and are made available by patients, not doctors.

Feedback
Flashcards & Bookmarks ?
Please log in or register to use Flashcards and Bookmarks. You can also log in with
Flashcards ?
My bookmarks ?
+ Add current page to bookmarks
Mentioned in ?
References in periodicals archive ?
If we perform the experiment in vivo, the crosslinking agents need to be injected subconjunctivally and may not be distributed evenly on the surface of the sclera. The crosslinking effect could also be affected by other factors, such as catabolism in vivo, which will affect the final results of the study.
Comparison of the biomechanics and fixation index of crosslinking between lysyl oxidase and genipin on guinea pig sclera, an animal model of defocus-induced high myopia
In the literature, recurrence rates of up to 38%-88% have been reported for the bare sclera technique (19, 20).
Effectiveness of Titanium-Platelet-Rich Autograft: A Preliminary Report/Titanyum - Trombositten Zengin Fibrin Otogreftinin Etkinligi: On Bildiri
The minimally invasive ultraviolet sclera cross-linking apparatus used in this study was developed by Tianjin Eye Hospital and Suzhou Institute of Biomedical Engineering and Technology.
Minimally Invasive Repetitive UVA Irradiation along with Riboflavin Treatment Increased the Strength of Sclera Collagen Cross-Linking
Yet by the time people notice the yellowish discoloration in the sclera, bilirubin levels are already well past cause for concern.
New App Uses Smartphone Selfies to Screen for Pancreatic Cancer
With the aid of a spring action scissors, the Pterygium was freed from the overlying conjunctiva and the underlying sclera by blunt dissection.
Analysis of efficacy, recurrence and complications following pterygium surgery with limbal auto-conjunctival graft in farmers
[1] The word ochronosis refers to the dark bluish discoloration of connective tissues including the sclera, cornea, auricular cartilage, heart valves, articular cartilage, tendons and ligaments.
Black colored intervertebral disc; ochronosis: A case report
The rectus muscles are originated in the posterior segment of the orbit and in this point they are fused and individualize themselves according to their approximation of the sclera adhering to the optical pedicle.
Morphological Study of the Eye Bulb of the Hammerhead Shark, Sphyrna lewini (Elasmobranch: Carcharhinidae)/Estudio Morfologico del Bulbo Ocular del Tiburon Martillo, Sphyrna lewini (Elasmobranch: Carcharhinidae)
There are two additional case reports on IgG4-RD involving the sclera: one described an IgG4-RD flare in a patient with a long history of the disease (diagnosis based on extraorbital biopsy, submandibular gland biopsy) [5] and the other was a case of IgG4-related pachymeningitis with concomitant scleritis, uveitis, and orbital soft-tissue involvement [6].
IgG4-Related Disease Presenting as Isolated Scleritis
There was no positive staining of human cells in the sclera of transplanted eyes or in contralateral noninjected control eyes in any of the rabbits (Figures 1-3 and data not shown).
Long-Term Safety of Transplanting Human Bone Marrow Stromal Cells into the Extravascular Spaces of the Choroid of Rabbits
The sclera undergoes several changes during the development and progression of myopia, including scleral thinning and weakening [3].
Regulation of Matrix Metalloproteinase-2 Secretion from Scleral Fibroblasts and Retinal Pigment Epithelial Cells by miR-29a
For recession surgery, medial rectus muscle was detached from the sclera after used suspensory suture.
Convergent Strabismus in a Cat and It's Surgical Treatment
Professor Sclera is a haughty verbal opponent; the mysterious Professor Oedda entangles Muzhduk in her bed and her occult leanings.
The Ugly