[nerv]
a macroscopic cordlike structure of the body, comprising a collection of nerve fibers that convey impulses between a part of the central nervous system and some other body region. See Appendix 2-6 and see color plates.

Depending on their function, nerves are known as sensory, motor, or mixed. Sensory nerves, sometimes called afferent nerves, carry information from the outside world, such as sensations of heat, cold, and pain, to the brain and spinal cord. Motor nerves, or efferent nerves, transmit impulses from the brain and spinal cord to the muscles. Mixed nerves are composed of both motor and sensory fibers, and transmit messages in both directions at once.

Together, the nerves make up the peripheral nervous system, as distinguished from the central nervous system (brain and spinal cord). There are 12 pairs of cranial nerves, which carry messages to and from the brain. Spinal nerves arise from the spinal cord and pass out between the vertebrae; there are 31 pairs, 8 cervical, 12 thoracic, 5 lumbar, 5 sacral, and 1 coccygeal. The various nerve fibers and cells that make up the autonomic nervous system innervate the glands, heart, blood vessels, and involuntary muscles of the internal organs. 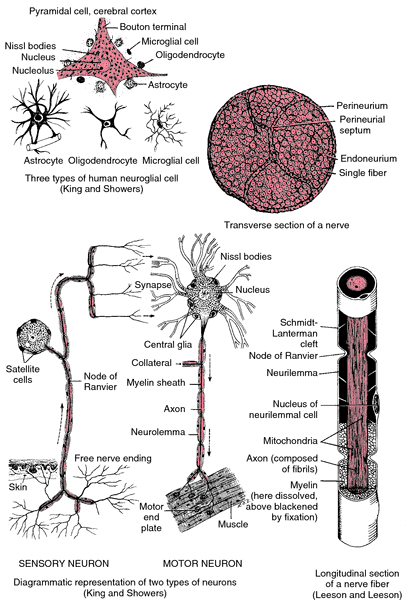 Details of structure of components of nerve tissue.
accelerator n's the cardiac sympathetic nerves, which, when stimulated, accelerate the action of the heart.
acoustic nerve vestibulocochlear nerve; see anatomic Table of Nerves in the Appendices.
afferent nerve any nerve that transmits impulses from the periphery toward the central nervous system, such as a sensory nerve. See also neuron.
articular nerve any mixed peripheral nerve that supplies a joint and its associated structures.
auditory nerve vestibulocochlear nerve; see anatomic Table of Nerves in the Appendices.
autonomic nerve any nerve of the autonomic nervous system; called also visceral nerve.
cranial n's see cranial nerves.
cutaneous nerve any mixed peripheral nerve that supplies a region of the skin. See anatomic Table of Nerves in the Appendices.
depressor nerve
1. a nerve that lessens the activity of an organ.
2. an afferent nerve whose stimulation causes a fall in blood pressure.
efferent nerve any nerve that carries impulses from the central nervous system toward the periphery, such as a motor nerve. See also neuron.
excitor nerve one that transmits impulses resulting in an increase in functional activity.
excitoreflex nerve a visceral nerve that produces reflex action.
fusimotor n's those that innervate the intrafusal fibers of the muscle spindle.
gangliated nerve any nerve of the sympathetic nervous system.
inhibitory nerve one that transmits impulses resulting in a decrease in functional activity.
medullated nerve myelinated nerve.
mixed nerve (nerve of mixed fibers) a nerve composed of both sensory (afferent) and motor (efferent) fibers.
motor nerve a peripheral efferent nerve that stimulates muscle contraction.
myelinated nerve one whose axons are encased in a myelin sheath; called also medullated nerve.
peripheral nerve any nerve outside the central nervous system.
pilomotor n's those that supply the arrector muscles of hair.
pressor nerve an afferent nerve whose irritation stimulates a vasomotor center and increases intravascular tension.
sciatic nerve see sciatic nerve.
secretory nerve an efferent nerve whose stimulation increases vascular activity.
sensory nerve a peripheral nerve that conducts impulses from a sense organ to the spinal cord or brain. See also neuron.
somatic n's the sensory and motor nerves supplying skeletal muscle and somatic tissues.
spinal n's the 31 pairs of nerves arising from the spinal cord and passing out through the vertebrae; there are eight cervical, twelve thoracic, five lumbar, five sacral, and one coccygeal. , and see anatomic Table of Nerves in the Appendices. 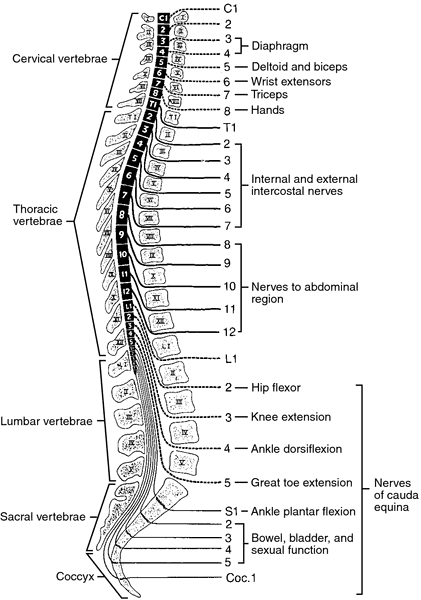 Spinal nerves emerging from the spinal cord through the intervertebral foramina with muscles or muscle movements listed for specific levels. From McQuillan et al., 2002.
splanchnic n's those of the blood vessels and viscera, especially the visceral branches of the thoracic, abdominal (lumbar), and pelvic parts of the sympathetic trunks. See Appendix 3-5.
sudomotor n's those that innervate the sweat glands.
sympathetic n's
1. see sympathetic trunk.
2. any nerve of the sympathetic nervous system.
trophic nerve one concerned with regulation of nutrition.
unmyelinated nerve one whose axons are not encased in a myelin sheath.
vasoconstrictor nerve one whose stimulation causes contraction of blood vessels.
vasodilator nerve one whose stimulation causes dilation of blood vessels.
vasomotor nerve one concerned in controlling the caliber of vessels, whether as a vasoconstrictor or vasodilator.
vasosensory nerve any nerve supplying sensory fibers to the vessels.
visceral nerve autonomic nerve.

[si-at´ik]
1. ischial.
2. pertaining to or located near the sciatic nerve or vein.
sciatic nerve a nerve extending from the base of the spine down the thigh, with branches throughout the lower leg and foot; it is the widest nerve of the body and one of the longest. sciatica is pain or inflammation along the course of this nerve. See anatomic Table of Nerves in the Appendices and see Plates.
Miller-Keane Encyclopedia and Dictionary of Medicine, Nursing, and Allied Health, Seventh Edition. © 2003 by Saunders, an imprint of Elsevier, Inc. All rights reserved.

[TA]
arises as the major product of the sacral plexus, exits the pelvis via the greater sciatic foramen, and descends in the posterior compartment of the thigh, deep to the long head of biceps femoris nerve; at the apex of the popliteal fossa it divides into the common peroneal and tibial nerves, although the two may separate at higher levels.
Synonym(s): nervus ischiadicus [TA], great sciatic nerve, nervus sciaticus
Farlex Partner Medical Dictionary © Farlex 2012

(sī-at'ik nĕrv) [TA]
Arises from the sacral plexus, passes through the greater sciatic foramen and down the thigh, deep to the long head of biceps femoris muscle; at the apex of the popliteal fossa it divides into the common peroneal and tibial nerves, although the two may separate at higher levels.
Synonym(s): nervus ischiadicus [TA] .
Medical Dictionary for the Health Professions and Nursing © Farlex 2012

The main nerve of the leg and the largest nerve in the body. The sciatic nerve is a mixed MOTOR and sensory nerve. It arises from the lower end of the spinal cord and runs down through the buttock to the back of the thigh. It supplies the muscles of the hip, many of the thigh muscles, all the muscles of the lower leg and foot, and most of the skin of the leg.
Collins Dictionary of Medicine © Robert M. Youngson 2004, 2005

Feedback
Flashcards & Bookmarks ?
Please log in or register to use Flashcards and Bookmarks. You can also log in with
Flashcards ?
My bookmarks ?
+ Add current page to bookmarks
Mentioned in ?
References in periodicals archive ?
Significant differences in the latency after sciatic nerve injury were seen between the 2 groups(p<0.001) (Fig.
Impairment Induction by Axotomy in Motor Functional and Histological Anterior Horn of Spinal Cord Structure/Induccion del Deterioro por Axotomia en la Estructura Motora Funcional e Histologica del Asta Anterior de la Medula Espinal
Histopathological analysis of nervous tissues: After 28 days of injury, Peripheral Nervous Tissues (sciatic nerve and dorsal root ganglia) and Central Nervous Tissues (cerebrum, cerebellum and spinal cord) were harvested and fixed in Davidson's solution for 24 h followed by 10% neutral buffered formalin solution.
FUNCTIONAL RECOVERY ENHANCEMENT BY TIGER MILK MUSHROOM, LIGNOSUS RHINOCEROTIS IN A SCIATIC NERVE CRUSH INJURY MODEL AND MORPHOLOGICAL STUDY OF ITS NEUROTOXICITY
SCIATIC nerve pain occurs when your sciatic nerve is pressed or rubbed.
Managing Sciatic Nerve Pain
Effect of antioxidant treatment of streptozotocin-induced diabetic rats on endoneurial blood flow, motor nerve conduction velocity, and vascular reactivity of epineurial arterioles of the sciatic nerve. Diabetes 2001; 50: 1927-1937, doi: 10.2337/diabetes.50.8.1927.
Expression of myo-inositol cotransporters in the sciatic nerve and dorsal root ganglia in experimental diabetes
The mean onset of motor block in the distribution of sciatic nerve was as follows: Tibial nerve- 39.54 [+ or -] 8.32 minutes; Common peroneal nerve 39.85 [+ or -] 15.11 minutes (Figure 5).
EVALUATION OF THE EFFECTIVENESS OF ANTERIOR COMBINED APPROACH OF 3 IN 1 BLOCK AND SCIATIC NERVE BLOCK BY SINGLE INJECTION TECHNIQUE FOR BELOW KNEE PROCEDURES
After inducing sciatic nerve injury on the rats, the researchers prepared them for surgery.
Daily exercise helps remove toxic proteins from muscles
The sciatic nerve is the largest peripheral nerve in terms of length and cross-sectional area and its size presents anatomical challenge for repair.
Sciatic Nerve Stripping: A Rare Avulsion Injury
Normally, the sciatic nerve passes through the sciatic notch beneath the piriformis muscle to travel into the posterior thigh.
Sciatica: definition, main causes and forms of natural therapy treatments
Because it is situated near the sciatic nerve, if the muscle goes into a spasm for any reason this can put pressure on the sciatic nerve.
Manage the Pain of Sciatica: Self-help strategies, acupuncture, and chiropractic can help ease your discomfort
However, Dirk strongly advises that you check your physiotherapist has experience with the spine and the sciatic nerve before undergoing treatment.
Fighting back against sciatica
Patients with STS of the lower extremity with sciatic nerve involvement who underwent limb-preserving tumor resections were selected from the database and included in this study.
Limb-Salvage Surgery of Soft Tissue Sarcoma with Sciatic Nerve Involvement
The day after the lidocaine test, the sciatic nerve at the front-thigh level was crushed with a microforceps for 2min.
Peripheral Nerve Injury-Induced Astrocyte Activation in Spinal Ventral Horn Contributes to Nerve Regeneration