Scales down | definition of scales down by Medical dictionary
https://medical-dictionary.thefreedictionary.com/scales+down
Printer Friendly

(redirected from scales down)
Also found in: Dictionary, Thesaurus, Financial, Idioms, Encyclopedia.
Related to scales down: scale up, scaling down, Contrave

[skāl]
1. a thin flake or compacted platelike body, as of cornified epithelial cells. See also squama.
2. a scheme or device by which some property may be measured (as hardness, weight, linear dimension).
3. to remove incrustations or other material from a surface, as from the enamel of teeth.
absolute scale (absolute temperature scale)
1. one with its zero at absolute zero (−273.15°C, −459.67°F).
2. Kelvin s.
ASIA scale a descriptive tool developed by the American Spinal Injury Association (ASIA) as a part of the complete classification of patients with spinal cord injuries. Called also Frankel Classification. See accompanying table.
Bayley S's of Infant Development a psychological test for assessing development of infants, using motor, mental, and behavioral developmental scales.
Borg scale a numerical scale for assessing dyspnea, from 0 representing no dyspnea to 10 as maximal dyspnea.
Brazelton Neonatal Behavioral Assessment scale a behavioral assessment scale used to evaluate the interactive behavior of a newborn by its responses to environmental stimuli.
Celsius scale (C) a temperature scale with zero at the freezing point of water and the normal boiling point of water at 100 degrees. The abbreviation 100°C should be read “one hundred degrees Celsius.” (For equivalents of Celsius and Fahrenheit temperatures, see Appendix.)
centigrade scale one with 100 gradations or steps between two fixed points, as the Celsius scale.
Fahrenheit scale (F) a temperature scale with the freezing point of water at 32 degrees and the normal boiling point of water at 212 degrees. The abbreviation 100°F should be read “one hundred degrees Fahrenheit.” (For equivalents of Fahrenheit and Celsius temperatures, see Appendix.)
French scale one used for denoting the size of catheters, sounds, and other tubular instruments, each French unit (symbol F) being approximately 0.33 mm in diameter.
Glasgow Coma scale a standardized system for assessing response to stimuli in a neurologically impaired patient, assessing eye opening, verbal response, and motor ability. Reaction scores are depicted in numerical values, thus minimizing the problem of ambiguous and vague terms to describe the patient's neurologic status. (See accompanying Table.) The total score is obtained by adding E, M, and V; a score of 7 or less indicates coma and a score of 9 or more rules out coma.
Global Assessment of Functioning (GAF) scale a hundred-point scale used as axis V of DSM-IV to assess a client's recent and current levels of social, psychological, and occupational functioning.
gray scale a representation of intensities in shades of gray, as in gray-scale ultrasonography.
interval scale a scale having equal numerical distances between intervals in addition to mutually exclusive categories, exhaustive categories, and rank ordering but no zero point.
Karnofsky scale (Karnofsky performance scale) a widely used performance scale, assigning scores ranging from 0 for a nonfunctional or dead patient to 100 for one with completely normal functioning.
Kelvin scale an absolute scale in which the unit of measurement, the kelvin, corresponds to that of the Celsius scale; therefore the ice point is at 273.15 kelvins.
Likert scale a tool used to determine opinions or attitudes; it contains a list of declarative statements, each followed by a scale on which the subject is to indicate degrees of intensity of a given feeling.
Neonatal Behavior Assessment scale Brazelton Neonatal Behavioral Assessment Scale.
performance scale a scale that measures a patient's performance status, serving as a prognostic indicator of seriousness of disease or disability. The most widely used scale is the Karnofsky scale.
Problem Rating scale for Outcomes see problem rating scale for outcomes.
semantic differential scale a measurement device that consists of two opposite adjectives with a seven-point scale between them; each item under examination is assigned to a specific point on the scale.
temperature scale one for expressing degree of heat, based on absolute zero as a reference point, or with a certain value arbitrarily assigned to such temperatures as the ice point and boiling point of water.
Miller-Keane Encyclopedia and Dictionary of Medicine, Nursing, and Allied Health, Seventh Edition. © 2003 by Saunders, an imprint of Elsevier, Inc. All rights reserved.

(skāl)
n.
1.
a. One of the many small hard dermal or epidermal structures that characteristically form the external covering of fishes and reptiles and certain mammals, such as pangolins.
b. A similar part in other animals, such as one of the thin flat overlapping structures that cover the wings of butterflies and moths.
2.
a. A dry thin flake of epidermis shed from the skin.
b. A skin lesion or lesions marked by such flakes.
v. scaled, scaling, scales
v.tr.
Dentistry To remove (tartar) from tooth surfaces with a pointed instrument.
v.intr.
To come off in scales or layers; flake.
scale′like adj.
The American Heritage® Medical Dictionary Copyright © 2007, 2004 by Houghton Mifflin Company. Published by Houghton Mifflin Company. All rights reserved.

(skal) [L. scala, staircase]
1. A graduated or proportioned measure.
2. A tool that rates people, places, or things in relation to one another.

A scale used for indicating low temperatures based on absolute zero. It is used in thermodynamic calculations of, for example, heat/energy transfer.
Synonym: Kelvin scale See: absolute temperature; absolute zero

Abbreviation: ABC
A 16-item instrument designed to measure a patient’s perceived level of confidence in performing common ADLs without losing balance and falling. The patient ranks his confidence to complete each item from 0% (no confidence) to 100% (complete confidence).

The range of densities on a radiograph; the number of tonal grays that are visible.

An instrument to gauge the functional capabilities and progress of a person with moderate to severe brain injury. A person who has no deficits after recovery from brain injury receives a score of 0 (not impaired). A severely impaired person who is unemployable, unable to care for himself, and unable to open his eyes, move, or speak receives the lowest score: 29.

, falls efficacy scale Abbreviation: FES
A questionnaire to assess the level of confidence that patients have in performing activities of daily living without fear of falling.

A system to indicate the diameter of catheters and sounds. Each unit on the scale is approximately equivalent to one-third mm; thus a 21 French sound is 7 mm in diameter. The size of the diameter of the catheter increases as the numerical value of French increases.

Abbreviation: GDS
A 30-item questionnaire to screen for depression in older adults, e.g., when they first become eligible for Medicare.

Abbreviation: GCS
A scale to determine a patient's level of consciousness. It is a rating from 3 to 15 of the patient's ability to open his eyes, respond verbally, and move normally. The GCS is used primarily during the examination of patients with trauma or stroke. Repeated examinations can help determine if the patient's brain function is improving or deteriorating. Many EMS systems use the GCS for triage purposes and for determining which patients should be intubated in the field.
See: tablecoma; Trauma Score

Abbreviation: GAF scale
A scale that rates a person's social, occupational, and psychological functioning. The scale rates from high functioning, (i.e., highly adapted and integrated to one's environment) to poorly functioning (i.e., self-destructive, homicidal, isolated, or lacking the rudiments of self-care). There is a children’s version of the scale, called the Children’s Global Assessment of Functioning (CGAF).

Abbreviation: GARF scale
A measure of the degree to which a family meets the emotional and functional needs of its members.

A scale used to express the degree of acidity or alkalinity of a solution. The classic pH scale extends from 0.00 (total acidity) to 14 (total alkalinity), the numbers running in inverse order of hydrogen ion (pH) concentration. The pH value is the negative logarithm of the hydrogen ion (pH) concentration of a solution, expressed in moles per liter.

As the hydrogen ion concentration varies in a definite reciprocal manner with the hydroxyl ion (OH-) concentration, a pH reading above 7.0 indicates alkalinity. In the human body, arterial blood is slightly alkaline, having a normal pH range of 7.35 to 7.45.

An eight-item measurement tool used to assess motor function and physical mobility after a stroke.

, Numeric Rating Scale. Abbreviation: NRS
A variation of the visual analog scale that uses a scalar numbering system to objectify a patient’s pain. Most numeric rating scales use a 10-cm line with tick marks spaced 1 cm apart. The leftmost mark is labeled “0” and has the notation “No Pain.” The rightmost mark is labeled “10” and the notation “Worst pain imaginable.” The patient is asked to indicate where on the continuum he or she would rate the current intensity of pain.

Abbreviation: RBRVS
A scale for determining the monetary value of evaluation and management services provided to patients, i.e., services provided to patients by nonsurgeons. The scale is based on the total work required for a given service and on other considerations, including the cost of the physician's practice, the income lost during training, and the relative cost of liability insurance.
See: managed care; managed competition

An instrument to measure the effect of a stroke on a person's mobility, speech, social activities, manual dexterity, strength, emotions, memory, and daily activities.

An instrument used to quantify a subjective experience, such as the intensity of pain. A commonly used visual analog scale is a 10-cm line labeled with “worst pain imaginable” on the right border and “no pain” on the left border. The patient is instructed to make a mark along the line to represent the intensity of pain currently being experienced. The clinician records the distance of the mark in centimeters from the left end of the scale. 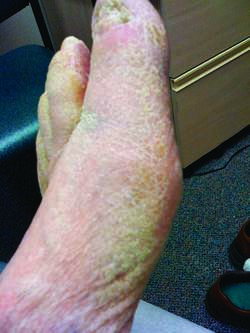 SCALE
1. A small dry flake, shed from the upper layers of skin. Some shedding of skin is normal; scale increases in diseases like pityriasis rosea, psoriasis, and tinea pedis and after scratching the skin. See: illustration
2. A film of tartar encrusting the teeth.
3. To remove a film of tartar from the teeth.
4. To form a scale on.
5. To shed scales.
illustration

(skāl)
To remove tartar from the teeth.
2. To desquamate.
[L. scala, a stairway]
Medical Dictionary for the Dental Professions © Farlex 2012

Q. how do i grade the severeness of my asthma? is there like a common scale for it?

A. Yes, it's graded according to the frequency of the day-time (from 2 days in a week to continuous symptoms) and night time (from 2 nights per month to every night) symptoms. The more frequent the disease, the more aggressive the treatment is.

You may read more here:
http://www.nhlbi.nih.gov/health/dci/Diseases/Asthma/Asthma_WhatIs.html

Q. how would recognize the severeness of every Autistic person? is there like a known chart and scale for it???

A. there's the "Social Responsiveness Scale" (SRS).
The SRS measures the severity of social impairment associated with autism spectrum disorders.

More discussions about scale
This content is provided by iMedix and is subject to iMedix Terms. The Questions and Answers are not endorsed or recommended and are made available by patients, not doctors.