[sahr´ko-mēr]
the contractile unit of a myofibril; sarcomeres are repeating units, delimited by the Z bands along the length of the myofibril. 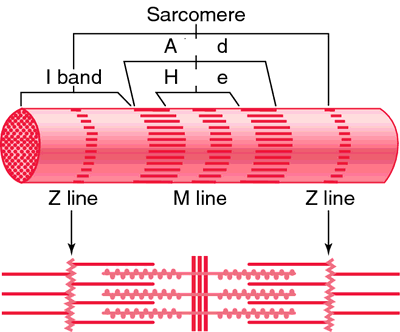 Thick and thin filaments are organized into contractile units called sarcomeres. A sarcomere extends from one Z line to the next and represents the fundamental unit of muscle contraction. From Copstead, 1995.
Miller-Keane Encyclopedia and Dictionary of Medicine, Nursing, and Allied Health, Seventh Edition. © 2003 by Saunders, an imprint of Elsevier, Inc. All rights reserved.

Fig. 273 Sarcomere . Muscle fibrils consist of alternating groups of the thick and thin filaments (dark and light bands), the distance between two Z-membranes being termed a ‘sarcomere’.

that part of the muscle fibre which is contained between two Z-MEMBRANES, and is the contractile element of the fibre.

Feedback
Flashcards & Bookmarks ?
Please log in or register to use Flashcards and Bookmarks. You can also log in with
Flashcards ?
My bookmarks ?
+ Add current page to bookmarks
Mentioned in ?
References in periodicals archive ?
In the above-mentioned simulating model, when we slided actin filaments present on both sides of a myosin filament toward center of A band in a single sarcomere as it occurs during contraction, two Z discs on either side of A band moved toward center of the sarcomere, as shown in Figure 1.
New hypothesis for mechanism of sliding filament theory of skeletal muscle contraction
The speed of sarcomere shortening as well as relengthening showed the same frequency relationship as the sarcomere-shortening amplitude.
Toll-like receptor 9 promotes cardiac inflammation and heart failure during polymicrobial sepsis
For example, electrical stimulation can improve functional maturation (action potential, calcium transient, and contraction force), while mechanical stretch increases cell size and sarcomere structure.
De Novo Human Cardiac Myocytes for Medical Research: Promises and Challenges
It can be assumed that when a muscle is contracting and working just concentrically, the rate that all of the muscle's sarcomeres collectively can or are allowed to generate mechanical energy, and apply or transfer it via attached tendons and skeletal segments to an external load ultimately determines how quickly the muscle develops force and how well it maintains a useful level of force against a moving load if loading velocities reach relatively high rates and the energy is being transferred to the load at relatively high rates.
The mechanical energy-generation basis and evident neural restriction of muscles' core power-rates and ensuing force levels
The sarcomere length of animals that received palm kernel cake decreased linearly (p<0.05; Table 5).
Carcass characteristics and meat quality of lambs that are fed diets with palm kernel cake
In 18-hour mechanically ventilated rats (PEEP of 2.5 cm H2O), diaphragm fibers adapted to the reduced length by absorbing serially linked sarcomeres, the smallest contractile units in muscle (i.e., longitudinal atrophy).
Mechanical Ventilation May Alter Diaphragm Muscle Fibers; This reduction in fiber length may make it more difficult to wean patients from ventilation
Carybdea marsupialis tentacle muscles lack Z-disks characteristic of a typical sarcomere structure but do possess light and dark myofilament bands.
Tentacle Musculature in the Cubozoan Jellyfish Carybdea marsupialis
We assumed baseline euvolemia for calculating the resting sarcomere length and that the volume infused did not accumulate in the RV.
Theoretical Consideration Regarding Static Loading of the Right Ventricle During Resuscitation/Resussitasyon Boyunca Sag Ventrikulun Statik Yuklenmesine Dair Teorik Dusunce
In its most simplistic form, this length-tension relationship in skeletal muscle is predicated on the magnitude of overlap between actin and myosin filaments within the muscle tissue, which directly reflects a precise sarcomere length-tension relationship.
Interrelationship Between Quadriceps' Activation and Inhibition as a Function of Knee-Joint Angle and Muscle Length: A Torque and Electro- and Mechanomyographic Investigation
The two sub-types of HCM share the same underlying genetic defects in the sarcomere that results in hypercontractility.
MyoKardia commences dosing in phase two MAVERICK-HCM clinical trial of mavacamten
Ultrastructural analysis showed swollen sarcoplasmic reticulum, dilated t tubes and areas with sarcomere disruption (Figure 4e).
Morphological changes in rat rectus abdominis muscle induced by diabetes and pregnancy
The genetic defects most commonly associated with LVNC are of the sarcomere genes which are also involved with both dilated and hypertrophic cardiomyopathies [8].
Advanced Biventricular Heart Failure due to Left Ventricular Noncompaction Cardiomyopathy Leading to the Formation of a Gastric Bezoar: The Implications of Heart Failure on the Gastrointestinal Tract