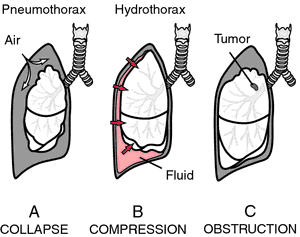 an area of atelectatic lung caused by parenchymal infolding due to pleural fibrosis, most often from asbestos exposure; appears as a masslike opacity and can be mistaken for lung cancer; may be associated with a comet tail sign; high level of contrast enhancement on dynamic computed tomography aids diagnosis.
Synonym(s): folded-lung syndrome
Farlex Partner Medical Dictionary © Farlex 2012
A condition associated with asbestosis and pleural plaques
A form of pulmonary collapse associated with pleural thickening that can mimic a neoplasm on plain chest radiographs. The abnormality was diagnosed radiologically in nine patients in whom follow-up varied from 1 to 6 years. Four patients had bilateral lesions, making a total of 13 examples. The CT findings were analyzed and compared with previously published criteria for the diagnosis of this disorder. In all cases, CT showed a rounded mass, 3.5-7.0 cm in diameter, abutting a thickened pleural surface in the lung periphery. The margin closest to the hilum was blurred by the entering vessels in 92% of the cases.
Segen's Medical Dictionary. © 2012 Farlex, Inc. All rights reserved.

, round atelectasis (rownd'ĕd at'ĕ-lek'tă-sis, rownd)
An area of atelectatic lung caused by parenchymal infolding due to pleural fibrosis, most often from asbestos exposure; appears as a masslike opacity and can be mistaken for lung cancer; may be associated with a comet tail sign; a high level of contrast enhancement on dynamic computed tomography aids diagnosis.
Medical Dictionary for the Health Professions and Nursing © Farlex 2012