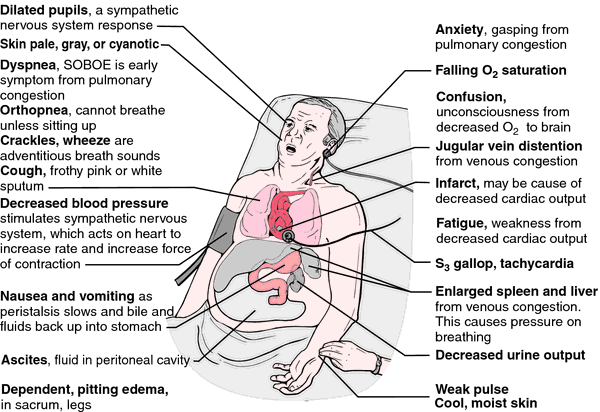 Clinical portrait of congestive heart failure. (SOBOE=shortness of breath on exertion) From Jarvis, 1996.
forward heart failure a concept of heart failure emphasizing the inadequacy of cardiac output as the primary cause.
high-output heart failure that in which cardiac output remains high, associated with conditions such as hyperthyroidism, anemia, and emphysema.
left-sided heart failure (left ventricular heart failure) failure of the left ventricle to maintain a normal output of blood; it does not empty completely and thus cannot accept all the blood returning from the lungs via the pulmonary veins, which become engorged. Fluid seeps out of the veins through the pulmonary capillaries and collects in the interstitial tissue of the lung, causing pulmonary edema that eventually leads to right ventricular heart failure as well.
low-output heart failure that in which cardiac output is diminished, associated with cardiovascular diseases such as coronary artery disease, hypertension, and cardiomyopathy.
right-sided heart failure (right ventricular heart failure) failure of proper functioning of the right ventricle, with subsequent engorgement of the systemic veins, producing pitting edema, enlargement of the liver, and ascites.
Miller-Keane Encyclopedia and Dictionary of Medicine, Nursing, and Allied Health, Seventh Edition. © 2003 by Saunders, an imprint of Elsevier, Inc. All rights reserved.