[rĕ-tik″u-lo-en″do-the´le-al]
pertaining to the reticuloendothelium or to the reticuloendothelial system.
reticuloendothelial system a network of cells and tissues found throughout the body, especially in the blood, general connective tissue, spleen, liver, lungs, bone marrow, and lymph nodes. They have both endothelial and reticular attributes and the ability to take up colloidal dye particles. Some of the reticuloendothelial cells found in the blood and in the general connective tissue are unusually large in size. These cells are concerned with blood cell formation and destruction, storage of fatty materials, and metabolism of iron and pigment, and they play a role in inflammation and immunity. Some of the cells are motile—that is, capable of spontaneous motion—and phagocytic—they can ingest and destroy unwanted foreign material.

The reticuloendothelial cells of the spleen possess the ability to dispose of disintegrated erythrocytes. They do not, however, destroy hemoglobin, which is liberated in the process.

The reticuloendothelial cells located in the blood cavities of the liver are called Kupffer cells. These cells, together with the cells of the general connective tissue and bone marrow, are capable of transforming into bile pigment the hemoglobin released by disintegrated erythrocytes. 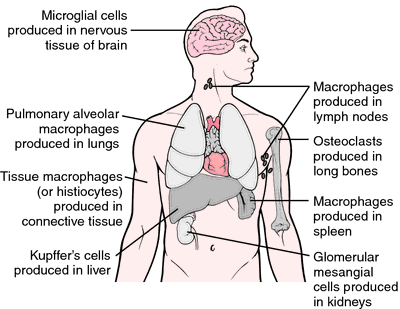 (rĕ-tik'yū-lō-en'dō-thē'lē-ăl)
Denoting or referring to reticuloendothelium.
Medical Dictionary for the Health Professions and Nursing © Farlex 2012

Feedback
Flashcards & Bookmarks ?
Please log in or register to use Flashcards and Bookmarks. You can also log in with
Flashcards ?
My bookmarks ?
+ Add current page to bookmarks
Mentioned in ?
References in periodicals archive ?
Genetic association of reticuloendothelial activity in chickens.
Aloe vera Polysaccharides as Biological Response Modifiers in Chickens
Tf incorporates iron coming from two major sources: dietary iron (both inorganic and heme iron) absorbed in the duodenum to compensate for daily iron loss and iron derived from destruction of old and effete erythrocytes by reticuloendothelial cells in the spleen and liver (Figure 3).
Dual Role of ROS as Signal and Stress Agents: Iron Tips the Balance in favor of Toxic Effects
Splenectomy can also serve as a therapeutic option by removing the major reticuloendothelial reservoir.
Autoimmune Hemolytic Anemia and Red Blood Cell Autoantibodies
It also should not be forgotten that in HH, serum iron levels and the transferrin saturation rate can be within normal limits in cases with an excessive accumulation of iron in reticuloendothelial system organs and higher ferritin levels.
Hemochromatosis mistakenly treated as rheumatoid arthritis
Leprosy is a systemic disease involving skin, nerves and the reticuloendothelial system, the liver being the commonest internal organ affected.
Fulminant hepatic failure in a 15 year old boy with borderline lepromatous leprosy and Type 2 reaction
The micelle was recognized by reticuloendothelial system (RES), which is self-defense system of living organisms, and its undesired uptake at liver and spleen was high.
Solid tumor-targeting theranostic polymer nanoparticle in nuclear medicinal fields
PEG provides a desirable coating for nanotubes and nanoparticles, because it reduces their immunogenicity and reduces their chance of being nonspecifically taken up by cells of the reticuloendothelial system.
The long-term fate and toxicity of PEG-modified single-walled carbon nanotube isoliquiritigenin delivery vehicles in rats
As in tuberculosis, macrophages assist in dissemination of the organism via lymphatics and the blood to the adjacent lymph nodes and throughout the reticuloendothelial system (liver, spleen, lymph nodes, adrenal glands, and bone marrow).
A 31-year-old man with AIDS, fever, and a rash
Any excessive accumulation in storage sites, primarily the hepatic parenchyma and reticuloendothelial cells, is shown by raised ferritin levels and percentage saturation of transferrin.
Haemochromatosis: phenotype to genotype or man to molecules
On systemic examination other systems were found to be normal including the reticuloendothelial system.
Angiolymphoid hyperplasia with eosinophilia
Pseudomonas aeruginosa is a predominant pathogen associated with chronic pulmonary infection and mortality in CF.[sup.17] Extrapulmonary spread of infection is quite rare, likely owing to enhanced immune complex formation and reticuloendothelial clearance in CF patients.[sup.3,4] However, there have been case reports of extrapulmonary spread of Pseudomonas aeruginosa in immunocompetent CF patients chronically infected with the mucoid strain of this organism with bacteremia, endopthalmitis and pericarditis.[sup.18]-[sup.21] In most cases, patients had poor outcomes, ranging from enucleation to death, despite prompt diagnosis and treatment for their extrapulmonary infections.
Pseudomonas aeruginosa bacteremia and prostatitis in a patient with cystic fibrosis