a smoothly rounded mucosal hamartoma of the large bowel, which may be multiple and cause rectal bleeding, especially in the first decade of life; it is not precancerous.
Synonym(s): retention polyp
Farlex Partner Medical Dictionary © Farlex 2012

GI disease A pedunculated mass arising in the GI tract mucosa, composed of dilated glands in an inflamed stroma; surface is often eroded, accompanied by inflammatory atypia; all are associated with polyposis syndromes. See Polyp.
McGraw-Hill Concise Dictionary of Modern Medicine. © 2002 by The McGraw-Hill Companies, Inc. 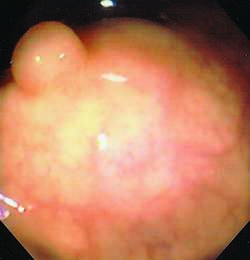