(ŏs′ə-fĭ-kā′shən)
n.
1. The natural process of bone formation.
2.
a. The hardening or calcification of soft tissue into a bonelike material.
b. A mass or deposit of such material.
3.
a. The process of becoming set in a rigidly conventional pattern, as of behavior, habits, or beliefs.
b. Rigid, unimaginative convention.

(os?i-fi-ka'shun) [? + facere, to make]
1. The formation of bone matrix.
2. The replacement of other tissue by bone, esp. during fetal development. See: osteogenesis 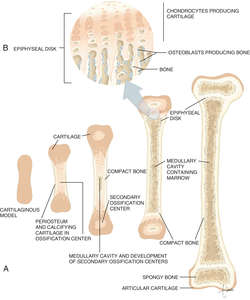 ENDOCHONDRAL OSSIFICATION: Ossification process in a long bone; (A) progression from embryo to young adult, (B) microscopic view of an epiphyseal disk

The formation of bone in abnormal sites or abnormal development of bone.

The formation of successive thin layers of bone by osteoblasts between the underlying bone or cartilage and the cellular and fibrous layer that covers the forming bone. Also called subperiosteal ossification.

The process of conversion of other tissues into bone. Most bone forms from CARTILAGE but some is laid down by other connective tissue (membranous bone). Ossification may also occur in tissues that have been the site of disease such as long-term inflammation.

bone formation which replaces another structure such as cartilage.

Q. is their any way to cure osteogenesis imperfecta my son has this bone disorder and can;t stand to see him cry thank you for any help

A. as far as i know- OI is a genetic problem. today there is no cure to genetic problems. there is a big research on gene therapy but there's a long long road before we will see any result..sorry... but there are several treatments that can ease your son's pain, here is a wonderful site that stores a vast amount of information about IO, including recent studies and researches:
http://www.oif.org/site/PageServer
More discussions about ossification