(re-sus?i-ta'shon) [L. resuscitare, to raise up again, rebuild]
Revival from a serious illness or injury. 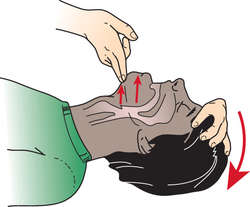 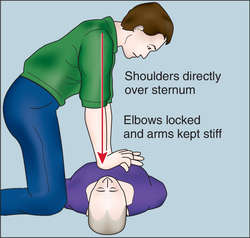 The first step in CPR is to ensure that an unarousable patient needs cardiopulmonary support and is not merely asleep or unconscious. If the patient does not respond to a loud voice or gentle shaking, the best thing a rescuer can do is to call for skilled assistance because successful resuscitation usually depends on the speed with which the patient can be defibrillated.

Before the defibrillator arrives, the rescuer can either position the patient for chest compressions only or begin rescue breathing. The patient should be placed supine on a firm, flat surface, with care taken to protect his cervical spine if traumatic injury is suspected. Kneeling at the level of the patient's shoulder, the rescuer performing rescue breathing may open the patient's airway, either with the jaw-thrust or the head-tilt chin-lift technique. If foreign bodies are present in the airway, they must be removed; dentures must also be removed if they interfere with resuscitation. Next, breathing is assessed by listening for breath sounds at the nose and lips and watching for the rise and fall of the chest. If these signs are not present, the patient is apneic, and rescue breathing can be performed. Survival rates of patients undergoing CPR are roughly equivalent with or without rescue breathing.

Rescue breathing can be performed with mouth-to-mouth technique or through a mask with a one-way valve if one is available. The rescuer gives two deep, slow positive-pressure breaths to the patient, the duration of each breath depending on the patient's age. If the supplied breaths meet obvious resistance, the rescuer should make another attempt to reopen the airway, and, if this is ineffective, to clear the airway with the Heimlich maneuver in children and adults. Infants should receive chest thrusts and blows to the back instead of the Heimlich maneuver.

The AHA formerly suggested checking the victim for a pulse after the first two breaths but eliminated the pulse check in its revised guidelines of 2000. If the patient is not breathing on his own, rescue breathing continues. If there is no pulse, external chest compression is begun and continued, with periodically interposed ventilations, until a defibrillator arrives or the patient revives. The precise number of ventilations and chest compressions per minute depends on the patient's age and the number of rescuers. For a single rescuer caring for an adult patient, two breaths are given for every 15 chest compressions. According to the AHA, for resuscitation purposes, infants are those who are up to a year old, children are from 1 to 8 years old, and adults are over the age of 8.

Compressions are given to adults (the usual victims of cardiac arrest) at the center of the sternum between the nipples, with the heel of one hand below the other hand; the fingers of the two hands are interlaced for support and to minimize the possibility of fracturing the ribs. The rescuer's elbows should be locked and straight, and the direction of compression should be exactly perpendicular to the patient's chest.

When professional rescuers arrive, the patient should be defibrillated immediately. If a defibrillator is not available, two-person CPR continues; the two rescuers alternate in giving rescue breaths and chest compressions to minimize fatigue. Ventilation and chest compressions are held for 5 sec at the end of the first minute and every few minutes after to determine whether the patient has responded. illustration; advanced cardiac life support; defibrillation; emergency cardiac care;

The restoration of a patient's normal neurological function due to effective revival from cardiopulmonary arrest.

Precise adjustments in a septic patient's hemodynamics, oxygenation, and volume status to optimize his or her chances of survival.

Abbreviation: LDB-CPR
Automated chest compressions made during cardiopulmonary resuscitation, in which the thorax of the patient is wrapped in a compression belt that alternately squeezes the chest and allows it to return to its original shape.

Treatment of a seriously ill patient with small, rather than large volumes of intravenous fluids and without an explicit attempt to restore normal blood pressures. Synonym: hypotensive resuscitation

The administration of chest compressions to a victim of cardiac arrest with a plunger that alternately compresses the chest and allows it to return to its original position.

Provision of respiratory gases, consisting of approximately 16% oxygen, to a patient in respiratory or cardiopulmonary arrest by exhaling directly into the open mouth of the unconscious victim. Because of potential exposure to infectious disease, this technique is used only when a pocket mask or other barrier device is not available.
See: artificial respiration; cardiopulmonary resuscitation

The prevention of death or injury to newborn infants with techniques to support the newborn's airway, breathing, circulation, and body temperature. In the U.S. about 1% of all newborns require intensive resuscitative efforts immediately after birth. Most are infants born preterm (before 37 weeks’ gestation). Failure to recognize and treat neonatal emergencies may result in inadequate oxygen delivery to the brain, heart, lungs, and other organs. Seizures, cognitive impairment, encephalopathy, or cerebral palsy may result from delayed recognition of asphyxia in the neonatal period.

The cornerstone of neonatal resuscitation is the prompt recognition of the newborn who is failing to breathe and perfuse organs effectively. Immediately after birth, the newborn should be dried, gently suctioned, and assessed for: adequate respiratory effort (versus apnea); a heart rate above 100 beats/min; good muscle tone (as opposed to flaccidity); skin color that indicates effective cardiac output (rather than cyanosis); and evidence of full-term versus pre-term birth.

The neonate who lacks some of these findings should be professionally managed, with warming, gentle stimulation (e.g., rubbing its back gently with a towel to stimulate effective breathing) and airway suctioning. When apnea, hypothermia, respiratory distress, bradycardia, or poor skin perfusion is evident, evidenced-based interventions (e.g., those recommended by the Neonatal Resuscitation Program of the American Academy of Pediatrics and the AHA) should be begun immediately.

Positive-pressure ventilation (PPV), with breaths supplied via a bag mask device, effectively resuscitates most infants at risk for neonatal asphyxia. Those who have meconium in the upper airways (evidenced by meconium staining of the amniotic fluid), as well as inadequate breathing, slow heart rate, and poor muscle tone, require endotracheal intubation and suctioning, preferably by an experienced practitioner.

Chest compressions are most effective when the sternum is depressed to a depth equal to one third of the anteroposterior chest diameter of the newborn. The preferred technique is to use the thumbs to depress the sternum, with the hands encircling the newborn’s thorax. An alternative is to perform compressions with two fingers on the same hand, so that the umbilical vein can be cannulated by another resuscitator. Ninety compressions a minute should be coordinated with 30 positive-pressure breaths, with care taken to avoid simultaneous compressions and ventilations.

Access to the circulation can be gained through the umbilical vein or intraosseously into the tibia. Normal saline or lactated Ringer’s solution is the preferred fluid. Narcotic antidotes should be given to reverse any depression in respiratory or neurological status from maternal narcotic overdose. Inotropes such as epinephrine should be used when ventilation and chest compressions do not revive the dying infant.

In prolonged resuscitations, blood gases should be drawn to help guide additional therapies.

Resuscitative interventions that have not proved to be helpful include the use of high-dose epinephrine, the induction of cerebral hypothermia, and the use of carbon dioxide detectors on the endotracheal tube.

Resuscitation should not be initiated for children born with severe anomalies incompatible with life, e.g., anencephaly or birth weights of less than 400 g. Resuscitative efforts that do not resolve apnea and pulselessness after more than 10 min are rarely successful in newborns. In these circumstances, efforts may be discontinued.

Bringing a person back to life after an apparent death or in cases of impending death.
Mentioned in: Cardiopulmonary Resuscitation (CPR), Life Support
Gale Encyclopedia of Medicine. Copyright 2008 The Gale Group, Inc. All rights reserved.

Feedback
Flashcards & Bookmarks ?
Please log in or register to use Flashcards and Bookmarks. You can also log in with
Flashcards ?
My bookmarks ?
+ Add current page to bookmarks
Mentioned in ?
References in periodicals archive ?
Data regarding their age, qualification including postgraduate diploma or degree, experience in pediatrics, NR workshop attended and their Knowledge regarding basic steps of NR; clinical parameters of NR (following steps of resuscitation like Preparation, Safety, Shout for help and Stimulate) management (Airway, Breathing, Chest Compression, Drugs, Reassessment), equipment required for resuscitation (20 cc Syringe, bulb sucker, suction catheter, nasogastric tube, mask of different sizes, ambu bag, laryngoscope with straight blade, endotracheal tubes of different sizes), drugs required for resuscitation (epinephrine, volume expenders, sodium bicarbonate, Naloxone, Dopamine Hydrochloride), and follow up assessment and care provided were recorded.
Knowledge of clinicians/pediatricians about neonatal resuscitation in a tertiary care hospital
Among the Red Cross courses that will be offered to the individuals credentialed annually through Cascade is the innovative new Resuscitation Suite[TM] program for healthcare providers.
Cascade Healthcare Services to Deliver American Red Cross Programs to United States Military
Resuscitation leaders should be aware of these limitations when using feedback devices and should take corrective steps, such as ensuring the use of a backboard, to help improve compression depth measurement.
Does Accelerometer Use Lead to Higher Quality CPR for Advanced Cardiac Life Support Providers? A Prospective Randomized Study
Increasing blood flow (CO in macro- and micro-circulation) through fluid resuscitation is the first procedure and essential step for shock resuscitation.
Personalized Critical Hemodynamic Therapy Concept for Shock Resuscitation
"Resuscitation teams at hospitals with high IHCA survival differ from non-top-performing hospitals," the authors write.
Factors Identified That Affect Resuscitation Teams' Success; Team design, roles, communication, training all affect in-hospital cardiac arrest outcomes
'A Time to Act"--AnaesthesIologists In resuscitation help save 200,000 lives per year worldwide: school children, lay resuscitation, telephone- CPR, IOM and more.
Okul Cocuklari da Hayat Kurtarabilir/School Children Save Lives
The previous revision to this resuscitation project was approved by ECNEC at a cost of Rs.7.8 billion in January 2016, which included a foreign currency part of Rs4.7 billion.
Railway's infrastructure repair cost swells to Rs10.46 billion
Early cardiopulmonary resuscitation in out-of-hospital cardiac arrest.
The Forgotten Role of Bystander CPR to Improve Out of Hospital Cardiac Arrest Outcomes in Oman
If in-hospital cardiac arrest occurs, it will most likely be a nurse who recognises the need for, and begins resuscitation. This means nurses have a professional responsibility to be competent at identifying deteriorating patients, activating rapid response teams, and providing high-quality, basic life support to enable the best possible patient outcomes.
Nurses key to preventing and managing cardiac arrest
Therefore, in selected cases of OHCA, substituting failed spontaneous circulation by an extracorporeal device seems to be an attractive approach, that is, to use extracorporeal cardiopulmonary resuscitation (ECPR).
Refractory Ventricle Arrhythmias Alternating with Pulseless Electrical Activity in a Young Woman Rescued by Extracorporeal Cardiopulmonary Resuscitation
Fluid resuscitation was performed and she was also transfused with 2 blood units, but she continued being hemodynamically unstable.
Intra-Abdominal Hemorrhage following Cardiopulmonary Resuscitation: A Report of Two Cases
New Delhi [India], December 17 ( ANI ): Experts from leading medical associations like Indian Academy of Paediatrics (IAP), Indian Medical Association (IMA) and National Neonatal Forum of India (NNF) met recently in New Delhi to carve out a policy on neonatal resuscitation and infant viability in India.
Medical experts lay down policy for foetal viability