[kah-pas´ĭ-te]
the power to hold, retain, or contain, or the ability to absorb; usually expressed numerically as the measure of such ability.
closing capacity (CC) the volume of gas in the lungs at the time of airway closure, the sum of the closing volume and the residual volume. See also closing volume.
decreased intracranial adaptive capacity a nursing diagnosis accepted by the North American Nursing Diagnosis Association, defined as the state in which intracranial fluid dynamic mechanisms that normally compensate for increases in intracranial volumes are compromised, resulting in repeated disproportionate increases in intracranial pressure in response to a variety of noxious and nonnoxious stimuli.
diffusing capacity see diffusing capacity.
forced vital capacity the maximal volume of gas that can be exhaled from full inhalation by exhaling as forcefully and rapidly as possible. See also pulmonary function tests.
functional residual capacity the amount of gas remaining at the end of normal quiet respiration.
heat capacity the amount of heat required to raise the temperature of a specific quantity of a substance by one degree Celsius.
inspiratory capacity the volume of gas that can be taken into the lungs in a full inhalation, starting from the resting inspiratory position; equal to the tidal volume plus the inspiratory reserve volume.
maximal breathing capacity maximum voluntary ventilation.
thermal capacity heat capacity.
total lung capacity the amount of gas contained in the lung at the end of a maximal inhalation. 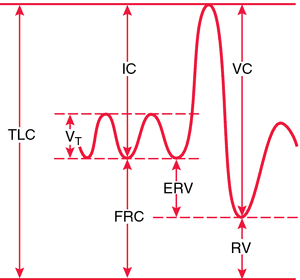 [vi´tal]
pertaining to life; necessary to life.
vital capacity (VC) the greatest volume of gas that, following maximum inhalation, can be expelled during a complete, slow, forced exhalation; equal to inspiratory capacity plus expiratory reserve volume.

Laboratory values for vital capacity, forced vital capacity, forced expiratory volume, and forced expiratory flow are usually reported both as absolute values and as statistically derived predicted values based on the age, sex, and height of a patient. The statistical value is reported as a percentage. See also pulmonary function tests.
Miller-Keane Encyclopedia and Dictionary of Medicine, Nursing, and Allied Health, Seventh Edition. © 2003 by Saunders, an imprint of Elsevier, Inc. All rights reserved.

the greatest volume of air that can be exhaled from the lungs after a maximum inspiration.
Synonym(s): respiratory capacity
Farlex Partner Medical Dictionary © Farlex 2012

(VC) (vī'tăl kă-pas'i-tē)
The greatest volume of air that can be exhaled from the lungs after a maximum inspiration.
Synonym(s): respiratory capacity.
Medical Dictionary for the Health Professions and Nursing © Farlex 2012

The volume of air that can be expelled from the lungs by a full effort following a maximal inspiration.
Collins Dictionary of Medicine © Robert M. Youngson 2004, 2005

the total amount of air that can be expired after a maximum inspiration (deep breath). This is calculated as the sum of:

(VC) (vī'tăl kă-pas'i-tē)
The greatest volume of air that can be exhaled from the lungs after a maximum inspiration.
Synonym(s): respiratory capacity.
Medical Dictionary for the Dental Professions © Farlex 2012