[in-sizh´un]
1. a cut or a wound made by a sharp instrument. 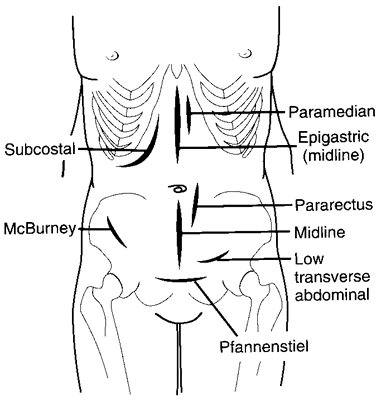 Various abdominal incisions. From Dorland's, 2000.
2. the act of cutting.
Miller-Keane Encyclopedia and Dictionary of Medicine, Nursing, and Allied Health, Seventh Edition. © 2003 by Saunders, an imprint of Elsevier, Inc. All rights reserved.

(in-sizh'ŭn),
A cut; a surgical wound; a division of the body parts, usually made with a knife.
[L. incisio]
Farlex Partner Medical Dictionary © Farlex 2012

(in-sizh'ŭn)
A cut; a surgical wound; a division of the soft parts made with a knife.
[L. incisio]
Medical Dictionary for the Health Professions and Nursing © Farlex 2012

A surgical cut made to achieve access or to allow discharge of unwanted material such as pus. The placement of surgical incisions is often a matter for judgement involving considerations of subsequent wound strength as well as good access.
Collins Dictionary of Medicine © Robert M. Youngson 2004, 2005

(in-sizh'ŭn)
A cut; a surgical wound; a division of the body parts.
[L. incisio]
Medical Dictionary for the Dental Professions © Farlex 2012