[ahrk]
a part of the circumference of a circle, or a regularly curved line.
binauricular arc the arc across the top of the head from one auricular point to the other.
reflex arc the circuit traveled by impulses producing a reflex action: receptor organ, afferent nerve, nerve center, efferent nerve, effector organ in a muscle; see also reflex. 1. the route followed by nerve impulses in the production of a reflex act, from the peripheral receptor organ through the afferent nerve to the central nervous system synapse and then through the efferent nerve to the effector organ.
2. a neural pathway that involes both the peripheral and central nervous systems.
Farlex Partner Medical Dictionary © Farlex 2012

Neurology The basic conduction pathway through the nervous system, consisting of a sensory neuron, an association neuron, and a motor neuron
McGraw-Hill Concise Dictionary of Modern Medicine. © 2002 by The McGraw-Hill Companies, Inc. 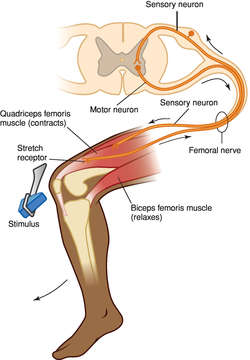 The path followed by a nerve impulse to produce a reflex action. The impulse originates in a receptor at the point of stimulation, passes through an afferent neuron or neurons to a reflex center in the brain or spinal cord, and from the center out through efferent neurons to the effector organ, where the response occurs.
See: illustration
See also: arc
Medical Dictionary, © 2009 Farlex and Partners

Fig. 267 Reflex arc . The arrows indicate the direction of impulse from receptor to effector.

the nervous connections between RECEPTOR and EFFECTOR that result in a simple response being elicited by a specific stimulus (a reflex action), such as a knee jerk without the involvement of the brain. The receptor is excited by a stimulus which induces a nerve impulse in the DENDRITE of a sensory (afferent) NEURONE. This passes through the cell body in the dorsal root ganglion and on along the sensory AXON to the SPINAL CORD. There it crosses a SYNAPSE, usually to an intermediate neurone which synapses with the efferent neurone and passes out of the spinal cord via the ventral root along the axon of the motor (efferent) neurone to the effector which produces the stereotyped response. Most reflexes involve more than one synapse, i.e. are polysynaptic, but those concerned with posture are often monosynaptic, such as the knee-jerk reflex. See Fig. 267 . see RAMUS COMMUNICANS.
Collins Dictionary of Biology, 3rd ed. © W. G. Hale, V. A. Saunders, J. P. Margham 2005

(rē'fleks ahrk)
1. Route followed by nerve impulses in production of a reflex act, from peripheral receptor organ through afferent nerve to central nervous system synapse and then through efferent nerve to effector organ.
2. Neural pathway that involes both peripheral and central nervous systems.
Medical Dictionary for the Dental Professions © Farlex 2012

Feedback
Flashcards & Bookmarks ?
Please log in or register to use Flashcards and Bookmarks. You can also log in with
Flashcards ?
My bookmarks ?
+ Add current page to bookmarks
Mentioned in ?
References in periodicals archive ?
(36) Dewey, "Reflex Arc"; and Hildebrand, Dewey, 16-17.
Achieving Organizational Flexibility through Ambidexterity
Polysynaptic reflexes: the path is characterized by reflex arc of one or more interneurons.
Swimming neuromuscular control
In his enlarged view of the reflex arc, Bode included the person's ability to anticipate future consequences based on past events, although the person might not be aware of those memories.
Boyd Henry Bode, John Dewey, and the problem of subject matters
Of the known mechanisms, acute exposure-related increase in "arrhythmia potential" is often linked to autonomic nervous system reflex arcs, which are putatively initiated when sensory irritant nerves are activated in the nose and lungs, and which result in brainstem-derived changes in sympathetic and parasympathetic balance thereafter.
TRPA1 and sympathetic activation contribute to increased risk of triggered cardiac arrhythmias in hypertensive rats exposed to diesel exhaust
The role of sinoaortic and cardiopulmonary baroreceptor reflex arcs in nocioception and stress-induced analgesia.
Orthostatic-induced hypotension attenuates cold pressor pain perception
A second type of stimulus-response system is the neuroendocrine reflex arc (Figure 6-2b).
Chapter 6: Functional anatomy of reproductive systems: neuroendocrine systems
The presence of an anal wink and bulbocavemosus reflex suggests an intact S2 through S4 reflex arc.
Urinary incontinence in elderly women: the right assessment will tailor the correct treatment. (Incontinence)
Recognizing that the brainstem is part of the hiccup reflex arc, Dr.
Hiccups can herald MS. (Case Study)
Of particular note is the author's painstaking narrative of the developments that led up to Dewey's famous essay "The Reflex Arc Concept in Psychology," which was published in 1896 and is now regarded as one of the great documents in the history of psychology.
Dewey's Empirical Theory of Knowledge and Reality. (Book reviews: summaries and comments)
One theory states that following injury, a reflex arc --a loop or circle involving various elements of the peripheral nervous system --is established.
The overlooked disease: reflex sympathetic dystrophy