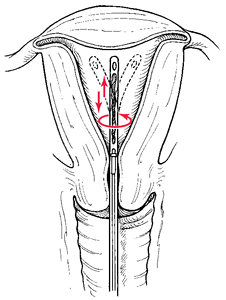 any method that removes a small cylindric specimen for biopsy by means of a special instrument that pierces the organ directly, or through the skin, or a small incision in the skin.
Synonym(s): trephine biopsy
Farlex Partner Medical Dictionary © Farlex 2012

n.
1. The removal of a small cylindrical specimen of tissue for pathologic study by pressing a circular instrument into the skin or mucous membrane surrounding a lesion.
2. A specimen so removed.
The American Heritage® Medical Dictionary Copyright © 2007, 2004 by Houghton Mifflin Company. Published by Houghton Mifflin Company. All rights reserved.

Surgical pathology A minor surgery performed in an outpatient setting or dermatology clinic, in which a hollow needle is used to obtain a 3 or 4 mm in diameter core–'punch' of skin, which is evaluated by LM. See Biopsy. Cf Shave biopsy, Skin biopsy.
McGraw-Hill Concise Dictionary of Modern Medicine. © 2002 by The McGraw-Hill Companies, Inc.

(pŭnch bī'op-sē)
Any method that removes a small cylindric specimen for biopsy by means of a special instrument that pierces the organ directly or through the skin or a small incision in the skin.
Medical Dictionary for the Health Professions and Nursing © Farlex 2012

(pŭnch bī'op-sē)
Any method that removes a small cylindric specimen for biopsy by means of a special instrument that pierces the organ directly or through the skin or a small incision in the skin.
Medical Dictionary for the Dental Professions © Farlex 2012

Feedback
Flashcards & Bookmarks ?
Please log in or register to use Flashcards and Bookmarks. You can also log in with
Flashcards ?
My bookmarks ?
+ Add current page to bookmarks
Mentioned in ?
References in periodicals archive ?
International recommendations favour punch biopsy for most of the disorders, however, keeping in mind the limited resources, it can always be tailored to small incisional biopsies.
Skin biopsy-some key concepts and guidelines
(8) Ng et al (9) found there was a significant increase in histopathologic misdiagnosis with a punch biopsy of part of a melanoma (odds ratio [OR]=16.6; 95% confidence interval [CI], 10-27; P<.001) and with shallow shave biopsy (OR=2.6; 95% CI, 1.2-5.7; P=.02) compared with excisional biopsy (including saucerization).
Biopsies for skin cancer detection: Dispelling the myths: This review debunks 5 myths and provides the information you need to perform rapid, high-quality biopsies to detect skin cancers at their earliest stages
Punch biopsy demonstrated interface changes and a perivascular and periadnexal infiltrate involving the superficial and deep dermis (A) in association with irregular papillomatous epidermal hyperplasia (B).
Cutaneous hypertrophic lupus erythematosus: a challenging histopathologic diagnosis in the absence of clinical information
The treatment was continued and there was complete recovery following third dose of doxorubicin which was confirmed by second punch biopsy from same site two weeks later which revealed only inflammatory changes with no evidence of neoplasia.
Therapeutic management of cutaneous lymphoma in a dog
Tissue from the punch biopsy sample and mold cultures were sent to the Indiana State Department of Public Health Laboratories, where B.
Blastomycosis in man after kinkajou bite
Punch biopsy performed before initiating treatment may show hyperkeratosis of the epidermis, epidermal atrophy with loss of rete ridges, homogenization of the collagen in the upper dermis, and a lichenoid inflammatory infiltrate in the dermis.
Avoid Empiric steroid treatment for vulvar skin disorders
punch biopsy) of CIN or if colposcopy was not possible.
'Look and Lletz'--a Chris Hani Baragwanath Hospital experience
In a related study, microscopy had sensitivity (71%) and specificity (77%) comparable with skin punch biopsy specimens (59% and 90%, respectively).
Noninvasive eye exam identifies neuropathy
A punch biopsy may be necessary during the work-up.
Trichotillomania is usually a passing phase in children
The punch biopsy of the exhibited patient demonstrated a dome-shaped dermal nodule composed of fibroblasts in an edematous stroma.
Scleromyxedema
Subsequent work-up included a staging magnetic resonance imaging (MRI) and a left areola punch biopsy. MRI revealed an absence of a normal left nipple and extensive focal clumped non-mass enhancement in the area of the known DCIS (FIGURE 4).
Erythematous, friable nipple with loss of protrusion: History of breastfeeding
Punch biopsy was taken from back and histopathological examination (HPE) of hematoxylin and eosin-stained (HandE) section revealed basket weave orthokeratosis with a column of parakeratotic cells, the cornoid lamella, characteristic of porokeratosis.
Porokeratosis palmaris et plantaris disseminata - a rare entity