(pŭmp),
1. An apparatus for forcing a gas or liquid from or to any part.
2. Any mechanism for using metabolic energy to accomplish active transport of a substance.
Farlex Partner Medical Dictionary © Farlex 2012

(pŭmp)
n.
1. A machine or device for raising, compressing, or transferring fluids.
2. Physiology A molecular mechanism for the active transport of ions or molecules across a cell membrane.
v. pumped, pumping, pumps
v.tr.
1. To cause to flow by means of a pump or pumplike organ or device: Derricks pumped oil out of the ground. The heart pumps blood throughout the body.
2. To draw, deliver, or pour forth: a writer who pumped out a new novel every year.
3. To propel, eject, or insert: pumped new life into the economy.
4. To cause to move with an up-and-down or back-and-forth motion: a bicyclist pumping the pedals; a piston pumping a shaft.
5. To push or pull (a brake or lever, for instance) rapidly: a driver pumping the brakes.
6. To shoot (bullets, for example) at or into: a gunner pumping rounds at a target.
7. Physics To raise (atoms or molecules) to a higher energy level by exposing them to electromagnetic radiation at a resonant frequency.
8. Physiology To transport (ions or molecules) against a concentration gradient by the expenditure of chemically stored energy.
9. To invest (money) repeatedly or persistently in something.
10. To question closely or persistently: pump a witness for secret information.
11. Informal To promote or publicize vigorously: The company pumped its new product on its website.
v.intr.
1. To operate a pump.
2. To move gas or liquid with a pump or a pumplike organ or device.
3. To move up and down or back and forth in a vigorous manner: My legs were pumping as I ran up the stairs.
4. To flow in spurts: Blood was pumping from the wound.
5. Sports To fake a throw, pass, or shot by moving the arm or arms without releasing the ball.
pump′er n.
The American Heritage® Medical Dictionary Copyright © 2007, 2004 by Houghton Mifflin Company. Published by Houghton Mifflin Company. All rights reserved.
Physiology A cell membrane-bound ion channel that maintains a gradient between one side and the other of H+, Cl-, etc.
Sports medicine Body-building A muscle that is well larger than normal, a result of aggressive exercise; pumped muscles have greater definition and the vessels are squeezed to the surface
Therapeutics A device used to deliver a precise amount of medication at a specific rate
Vox populi A device, structure or other artifice that causes a fluid or specific molecules to flow in a designated direction
Segen's Medical Dictionary. © 2012 Farlex, Inc. All rights reserved.

(pŭmp)
1. An apparatus for forcing a gas or liquid from or to any part.
2. Any mechanism for using metabolic energy to accomplish active transport of a substance.
Medical Dictionary for the Health Professions and Nursing © Farlex 2012 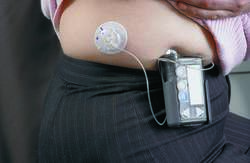 A device that alternates between applying pressure and no pressure on the sole of the foot. The change in pressure allows venous blood vessels to alternately fill and then empty, thus imitating the effects of walking on the veins of the lower extremities. The pump is used to prevent deep vein thromboses (DVTs) in patients at high risk because of a previous history of DVTs, hypercoagulable states, or prolonged bedrest.
Medical Dictionary, © 2009 Farlex and Partners

(pŭmp)
1. Apparatus for forcing gas or liquid from or to any part.
2. Any mechanism for using metabolic energy to accomplish active transport of a substance.
Medical Dictionary for the Dental Professions © Farlex 2012