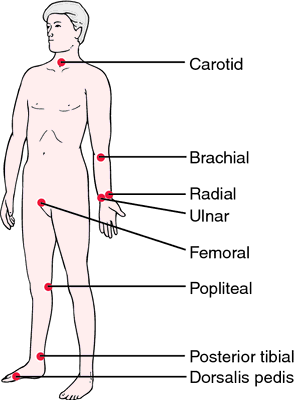 Pulses palpated during assessment of the arterial system.
abdominal pulse that over the abdominal aorta.
alternating pulse one with regular alteration of weak and strong beats without changes in cycle length. Called also pulsus alternans.
anacrotic pulse one in which the ascending limb of the tracing shows a transient drop in amplitude, or a notch.
anadicrotic pulse one in which the ascending limb of the tracing shows two extra small waves or notches.
anatricrotic pulse one in which the ascending limb of the tracing shows three extra small waves or notches.
apical pulse the pulse over the apex of the heart, as heard through a stethoscope or palpated.
atrial venous pulse (atriovenous pulse) a venous pulse in the neck that has an accentuated a wave during atrial systole, owing to increased force of contraction of the right atrium; a characteristic of tricuspid stenosis.
bigeminal pulse one in which two beats occur in rapid succession, the groups of two being separated by a longer interval, usually related to regularly occurring ventricular premature beats. Called also pulsus bigeminus.
bisferious pulse pulsus bisferiens.
brachial pulse that which is felt over the brachial artery at the inner aspect of the elbow; palpated before taking blood pressure to determine location for the stethoscope.
capillary pulse Quincke's pulse.
carotid pulse the pulse felt over the carotid artery, which lies between the larynx and the sternocleidomastoid muscle in the neck; frequently used to assess effectiveness of cardiac massage during cardiopulmonary resuscitation. It can be felt by pushing the muscle to the side and pressing against the larynx, or, if the patient is dyspneic, by palpating the pulse at the groove in the muscle.
catadicrotic pulse one in which the descending limb of the tracing shows two small notches.
catatricrotic pulse one in which the descending limb of the tracing shows three small additional waves or notches.
Corrigan's pulse a jerky pulse with full expansion and sudden collapse occurring in aortic regurgitation; called also water-hammer pulse.
dicrotic pulse a pulse characterized by two peaks, the second peak occurring in diastole and being an exaggeration of the dicrotic wave; called also pulsus bisferiens.
dorsalis pedis pulse the pulse felt on the top of the foot, between the first and second metatarsal bones. In 8 to 10 per cent of the population this pulse cannot be detected.
entoptic pulse a subjective sensation of seeing a flash of light in the dark with each heart beat.
femoral pulse one located where the femoral artery passes through the groin in the femoral triangle.
funic pulse the arterial tide in the umbilical cord.
hard pulse (high-tension pulse) one with a gradual impulse, long duration, slow subsidence, and a firm state of the artery between beats.
jerky pulse one in which the artery is suddenly and markedly distended.
paradoxical pulse one that markedly decreases in amplitude during inhalation, as often occurs in constrictive pericarditis.
pistol-shot pulse Corrigan's pulse.
plateau pulse one that is slowly rising and sustained.
popliteal pulse one palpated in the popliteal fossa, most easily detected when the patient is lying prone with the knee flexed about 45 degrees.
posterior tibial pulse a pulse felt over the posterior tibial artery just posterior to the ankle bone on the inner aspect of the ankle.
quick pulse one that strikes the finger smartly and leaves it quickly; called also pulsus celer.
Quincke's pulse alternate blanching and flushing of the skin that may be elicited in several ways, such as by pressing on the end of the nail and observing the nail bed or skin at the root of the nail. It is caused by pulsation of subpapillary arteriolar and venous plexuses and is sometimes seen in aortic insufficiency, although it may occur in normal persons under certain conditions. Called also capillary pulse (because it was formerly thought to be due to pulsations in the capillaries) and Quincke's sign.
radial pulse that felt over the radial artery at the wrist.
Riegel's pulse one that is diminished during respiration.
slow pulse one with less than the usual number of pulsations per minute; called also vagus pulse and pulsus tardus.
thready pulse one that is very fine and scarcely perceptible.
tricrotic pulse one in which the tracing shows three marked expansions in one beat of the artery.
trigeminal pulse one with a pause after every third beat.
vagus pulse slow pulse.
venous pulse the pulsation over a vein, especially over the right jugular vein.
water-hammer pulse Corrigan's pulse.
wiry pulse a small, tense pulse.
Miller-Keane Encyclopedia and Dictionary of Medicine, Nursing, and Allied Health, Seventh Edition. © 2003 by Saunders, an imprint of Elsevier, Inc. All rights reserved.

(vē'nŭs pŭls)
A pulsation occurring in the veins, especially the internal jugular vein.
Medical Dictionary for the Health Professions and Nursing © Farlex 2012

(vē'nŭs pŭls)
A pulsation occurring in the veins.
Medical Dictionary for the Dental Professions © Farlex 2012