[too-ber´ku-lo´sis]
an infectious, inflammatory, reportable disease that is chronic in nature and usually affects the lungs (pulmonary tuberculosis), although it may occur in almost any part of the body. The causative agent is Mycobacterium tuberculosis (also known as the tubercle bacillus). Formerly, the only other species of Mycobacterium thought to be pathogenic to humans were M. bovis and M. avium. It is now known that other species can produce diseases similar to true tuberculosis, including M. intracellulare, M. kansasii, M. simiae, and M. szulgai.

The most common mode of transmission of tuberculosis in the United States is inhalation of infected droplet nuclei. In some other parts of the world bovine tuberculosis, which is carried by unpasteurized milk and other dairy products from tuberculous cattle, is more prevalent. A rare mode of transmission is by infected urine, especially for young children using the same toilet facilities. Tuberculosis is also seen as an opportunistic infection in human immunodeficiency virus (HIV) infection.

The tubercle bacillus is capable of surviving for months in dried sputum that is not exposed to sunlight. Within the body it can lie dormant for decades and then become reactivated years after an initial infection. This secondary tuberculosis infection (endogenous reinfection) can occur at any time the patient's resistance is lowered. For this reason, periodic evaluation for evidence of the disease is extremely important for anyone who has had a primary tuberculosis infection. The tubercle bacillus is destroyed by boiling for 5 minutes, by autoclaving, by contact with coal tar preparations, e.g., phenol, and by ultraviolet radiation.
Primary and Secondary Tuberculosis. The first or primary infection with tuberculosis bacilli usually presents no symptoms. In about 99 per cent of those who are infected, the disease remains quiescent after the development of a hypersensitivity to the tuberculin microorganism and is no longer clinically significant.

The primary infection usually involves the middle or lower lung area. The primary lesion consists of a small area of exudation in the lung parenchyma (Ghon focus) which quickly becomes caseous (cheeselike) and spreads to the bronchopulmonary lymph nodes, where it gains access to the blood stream. Thus the stage is set for the development of a chronic pulmonary and extrapulmonary tuberculosis at a later time. In most instances, however, a secondary reinfection from inside the body (endogenous) or outside the body (exogenous) does not occur because of the subsequent development of tuberculin hypersensitivity and cellular immunity. The presence of antigen concentrations at the initial site of infection brings about necrosis and eventually fibrosis and calcification of the tissues, which arrests the infection and renders the disease inactive. If, however, the infection is not controlled, the patient develops the symptoms of progressive primary tuberculosis.

Secondary tuberculosis develops as a result of either endogenous or exogenous reinfection by the tubercle bacillus. This is the most common form of clinical tuberculosis. In the United States development of secondary tuberculosis is almost always the result of an endogenous reinfection, which occurs when the primary lesion becomes active. This most frequently happens in debilitated persons who have lowered resistance to disease.

Resistance to tuberculosis depends on the general health and living conditions of the individual. Poor health, crowded and unsanitary housing, malnutrition, and other illnesses can lower the body's defenses. A second factor that can lead to activation of the disease is frequent exposure to the bacilli or exposure to such numbers that even a healthy person cannot escape infection.
Tuberculin Testing. The most commonly used test is the mantoux test, which consists of an intradermal injection of a purified protein derivative of tuberculin. An indurated area (wheal) of 8 to 10 mm in diameter 48 to 72 hours after injection is considered positive. Induration must be present; a reddened area is not indicative of a positive reaction. If the test is positive for tuberculin sensitivity, further studies, including x-rays, are indicated before a definite diagnosis of tuberculosis is established. False negative results can occur with acute viral infections and some neoplastic diseases, e.g., Hodgkin's disease.Culture of M. tuberculosis from sputum or some other body fluid is the only way to positively confirm tuberculosis.
Symptoms
. A child or young person with active tuberculosis usually suffers from one or more of the following symptoms: loss of energy, poor appetite, loss of weight, and fever. Even though these symptoms may have causes other than tuberculosis, they must be regarded as warning signals. In adults, listlessness and vague pains in the chest may go unnoticed, since they are often not severe enough to attract attention. Unfortunately, the symptoms that most people associate with tuberculosis (cough, expectoration of purulent sputum, fever, night sweats, and hemorrhage from the lungs) do not appear in the early, most easily curable stage of the disease; often their appearance is delayed until a year or more after the initial exposure to the bacilli.

Chronic pulmonary tuberculosis is often accompanied by pleurisy. Pleurisy with effusion often is the first symptom of tuberculosis. In certain cases, complications are possible and each has its characteristic symptoms. At a fairly late stage, the tuberculosis bacillus may cause ulcers or inflammation around the larynx (tuberculous laryngitis). Less often, tuberculous ulcers form on the tongue or tonsils. Sometimes intestinal infections develop; they are probably caused by swallowed bacteria-contaminated sputum. A most serious complication is the sudden collapse of a lung, the indication that a deep tuberculous cavity in the lung has perforated, or opened into the pleural cavity, allowing air and infected material to flow into it.

When a fairly large and previously walled-off lesion, or infected area, suddenly discharges its contents into the bronchial tree, the result is the infection of a large part of the lung, an acute and dangerous complication which causes tuberculous pneumonia.

Tuberculosis bacilli can spread to other parts of the body by way of the blood, producing miliary tuberculosis. When a large number of bacilli suddenly enter the circulatory system, they are carried to all areas of the body and may lodge in any organ. Minute tubercles form in the tissues of the organs affected; these lesions are about the size of a pinhead or millet seed (hence the name miliary). Unless promptly treated, and occasionally even then, the tiny lesions spread, join, and produce larger areas of infection.

Tuberculous pneumonia can begin in this way, as can tuberculosis of any other organ. Miliary infections involving the meninges produce a particularly serious disease; indeed, until the development of antibiotics, this condition nearly always proved fatal.

Practically all parts and organs of the body can be secondarily invaded by tubercle bacilli, a common type being involvement of the kidneys, which often spreads to the bladder and genitalia. Bone involvement, particularly of the spine (pott's disease), was once common, especially among children.

Lupus vulgaris, or tuberculosis of the skin, is characterized by brown nodules on the corium; another form of tuberculosis of the skin is tuberculosis indurativa, a chronic disease in which indurated nodules form on the skin. When the adrenal glands are affected by tuberculosis, a rare occurrence, the condition can cause addison's disease.
Treatment and Care. Most persons with tuberculosis are cared for at home under the supervision of a public health nurse who periodically visits the patient and family. Hospitalization may be required for those patients who experience complications or who are noncompliant with chemotherapy. The importance of compliance with the entire course of chemotherapy should be stressed. Failure to complete chemotherapy is a major factor in the appearance of drug resistant tuberculosis.

Masks may be necessary for those having intimate contact with a patient who is just beginning chemotherapy, and in caring for patients who cannot or will not take precautions against spreading the infection. Usually, two to four weeks after medications are begun restrictions are removed regarding activities and contacts. Handwashing is essential to prevention of cross-infection. Fomites are not considered important in the transmission of tuberculosis and so no special precautions are required for eating utensils and other inanimate articles in the patient's room. Screening of family members and other contacts should be done. Standard precautions are used for patients with extrapulmonary tuberculosis and those who have a positive skin test even without evidence of disease. Institutionalized patients with pulmonary or laryngeal disease should be kept on airborne precautions. The Centers for Disease Control and Prevention has published "Guidelines for Preventing the Transmission of Mycobacterium Tuberculosis in Health Care Facilities." The document can be read on their web site at http://www.cdc.gov.
Drugs. Isoniazid remains the major antituberculous agent. It is usually administered in combination with rifampin. Ethambutol is added if the patient comes from an area of high resistance. In isoniazid-resistant cases, rifampin is substituted as a companion drug for ethambutol. Other medications are used if resistant organisms have developed.
Prevention. The incidence of tuberculosis is rising, and the development of resistant organisms is also rising. It must be stressed that medications must be taken as ordered. The best precautions are (1) maintenance of good health, (2) avoidance of unnecessary exposure to tuberculosis organisms, and (3) detection of the disease in its earliest stages. 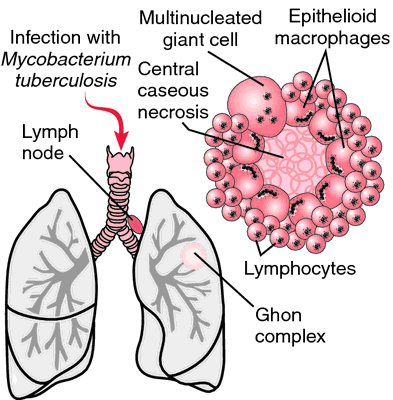 Tuberculosis. The Ghon complex, typical of pulmonary tuberculosis, consists of a parenchymal focus and hilar lymph node lesions. The detailed section of the diagram shows typical features of tuberculous granuloma: central caseous necrosis surrounded by epithelioid cells, multinucleated giant cells, and lymphocytes. From Damjanov, 2000.
avian tuberculosis a form affecting various birds, due to Mycobacterium avium, which may be communicated to humans and other animals. Individuals with impaired immunity have particular susceptibility to this infection.
bovine tuberculosis an infection of cattle caused by Mycobacterium bovis, transmissible to humans and other animals.
hematogenous tuberculosis that carried through the blood stream from the primary site of infection to other organs.
miliary tuberculosis an acute form of tuberculosis in which minute tubercles are formed in a number of organs of the body, owing to dissemination of the bacilli throughout the body by the bloodstream.
open tuberculosis
1. that in which there are lesions from which tubercle bacilli are being discharged out of the body.
2. tuberculosis of the lungs with cavitation.
pulmonary tuberculosis infection of the lungs by Mycobacterium tuberculosis; the first infection is usually quiescent, and it may develop later into tuberculous pneumonia and other conditions. See tuberculosis.
renal tuberculosis disease of the kidney due to Mycobacterium tuberculosis, usually from bacillemia in cases of pulmonary tuberculosis. Pathological changes include granulomatous inflammation and caseous necrosis of kidney tissue. Called also nephrotuberculosis.
tuberculosis verruco´sa cu´tis (warty tuberculosis) a condition usually resulting from external inoculation of the tubercle bacilli into the skin, with wartlike papules that coalesce to form patches with a reddened inflammatory border.
Miller-Keane Encyclopedia and Dictionary of Medicine, Nursing, and Allied Health, Seventh Edition. © 2003 by Saunders, an imprint of Elsevier, Inc. All rights reserved.

Infectious disease Infection by Mycobacterium tuberculosis, which occurs primarily–85% of cases, US–in the lungs Epidemiology TB is spread by aerosol from coughing or sneezing by infected Pt Clinical 1º infection is usually asymptomatic, 95% of Pts–US recuperate without further evidence of disease; PT develops in immunocompromised Pts, generally within wks after the primary infection or may lie dormant for yrs before causing disease At risk population Infants, elderly, and immunosuppressed–eg, chemotherapy, posttransplant Pts receiving immunosuppressants, or those with immunodeficiency–eg, AIDS; PT ranges from minimal to massive involvement, but progresses in all without therapy Risk factors Frequent contact with Pts with TB, crowding, unsanitary living conditions, poor nutrition; TB is rising in the US, due to AIDS, homelessness, drug-resistant strains of TB, incomplete treatment of TB–eg, poor compliance. See Atypical mycobacterial infection, Disseminated tuberculosis.
McGraw-Hill Concise Dictionary of Modern Medicine. © 2002 by The McGraw-Hill Companies, Inc.